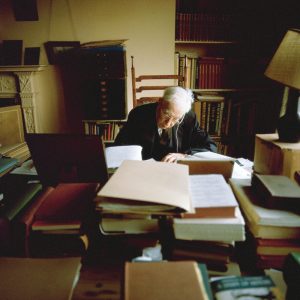 Daisaku Ikeda: In the present stage of human history, religion and science are, as you say, necessities of life. Because both are required, the two must not oppose each other. In fact, science must be based on religion, and religion must include scientific rationality. I firmly believe that establishing harmony between science and religion would have a revelatory effect on all mankind. In this connection, I think that the words of Albert Einstein—”Science without religion is lame, and religion without science is blind”—are of even greater importance now than when he said them.

Arnold Toynbee: Science and religion need not and ought not conflict. They are two complementary ways of approaching the universe mentally in order to cope with it. Science is inhibited from trespassing on religion’s field. It could not commit this trespass without making unverifiable dogmatic pronouncements and thereby stultifying itself by abandoning its own distinctive procedure of verification. Religion has sometimes trespassed on science’s field, but it has had to withdraw when science has claimed possession. Such withdrawals have, however, left religion’s own proper field intact.

Ikeda: Religion and the intuitive approach are for the good of mankind. We must awaken all human beings to a realization of their essential value. If we assume this responsibility, we can explore the complementary relations between religion and science in order to find a way to make religion more accessible to all. (p. 24)

Whether it has this effect or not, the concept of the death penalty involves the taking of life as a warning to other people or as a retaliation for crime. But one retaliation, by inevitably leading to another, sets in motion a course of wicked acts. I feel that life, as an absolute entity worthy of the profoundest respect, must never be treated as a means of achieving anything other than life itself. The dignity of life is an end in itself; therefore, when social restraint is necessary, it is certainly better to devise a method that does not tamper with life. The use of the death penalty as a warning manifests a regrettable tendency that has long plagued human society and that seems to be on the increase today. That tendency is the habit of undervaluing life.

War is one of the major causes of the undervaluing of life. In almost all cases, wars are waged by states acting in their own interests. Human life is regarded as no more than a means to the end of victory and, as such, is thought to be expendable. No crime committed by man is as heinous as this. As long as this monster crime is permitted to go unchecked, other human crimes will continue on a widening and deepening scale.

Toynbee: I hope the death penalty will be abolished in all countries for the following two cogent reasons. No human being has a moral right to deprive another human being of his life. As you insist, the abolition of the death penalty requires the simultaneous abolition of war. It is illogical to hold that we have no right to put to death, by the least inhumane means possible, a single human being who has committed some grave crime, like murder, against individual fellow human beings and against human society, yet at the same time to consider that, in war, it is legitimate to kill and wound countless human beings by the most cruel and barbarous means. Soldiers have committed no offence against their fellow human beings until they have been compelled, at the risk of losing their own lives, to try to kill so-called enemy soldiers, against whom they have no personal grievance. War not only murders people, it compels people to become murderers, and it causes these two crimes not just individually but en masse.

The second cogent reason for abolishing the death penalty and war is that killing is irrevocable. So long as a human being is alive, he has the possibility of reforming himself morally, even if he has been a criminal whose crimes have been serious and frequent.

Ikeda: I agree that abolishing the death penalty ought to be accompanied by the simultaneous abolition of war. (pp. 142–43)

Ikeda: The characteristic of the democratic leader, in contrast to the dictator, ought to be the awareness that the power he exercises while in office, no matter how great it is, originates with the people and is subject to their judgment. I realize that this system has a serious flaw. Because he is constantly aware of the surveillance of the people, a man in office who wants to remain there might adopt policies merely because they are popular and because in following them he ensures his continuation in power.

Toynbee: A democratic leader must steer a middle course between two undesirable alternatives, and his room for maneuver between them is narrow. On the one hand, he may be tempted to pander to the wishes of his constituents, even when he judges their wishes to be misguided. If he does this, he will be virtually abdicating from his role of leadership and will be betraying his trust. The opposite undesirable alternative is for him to trick his constituents into voting for a policy that he judges to be right but that they would have rejected if it had been put to them candidly. This, too, is a betrayal of the leader’s trust. Moreover, his fraud is likely to be detected sooner or later, and then he will be discredited.

Ikeda: I agree that the leader must not deceive himself for the sake of ingratiating himself with the people and that he must not deceive the people for the sake of putting through his own ideas. In all things, he must base his thinking and his actions on truth and faithfulness, for the moment that he attempts to fool either himself or the people, he forfeits his qualifications as a leader. There is nothing more disturbing in a society than a politician who is devoted solely to securing his own authority at all costs. …

I require that the politician be true and faithful to himself and to the people and that he be entirely just in his actions. The qualifications of a good leader—courage, justice, courtesy, practical wisdom, dignity and generosity—can only be manifested if the man who would be a leader is prepared to enter into dialogues with the people, do battle for their sake, and die with them if need be. Furthermore, the true value of the leader depends on how well he prepares those who will follow in his footsteps. He must train his followers not with the idea of personal advantage or the fulfilment of personal greed but with the welfare and future of all humanity in mind. (pp. 201–02)

Toynbee: Every improvement in technology brings with it an increase in power, and power can be used either for good or for evil. The most alarming feature of present-day society is that the power conferred by technology has recently increased to an unprecedented degree at an unprecedented rate, while the average level of the moral—or immoral—behavior of the human beings who now wield this vastly increased power has remained stationary, or may actually have declined.

Ikeda: Yes, as mankind has made technological progress, its standards of morality have tended to decline. The cause of this decline has been the foolish delusion that power won as a result of technological progress can take over the role of high moral standards. Breaking out of this delusion must be the starting point for the efforts to solve the dilemma in which man finds himself today, a dilemma which he has created himself.

Toynbee: We are aware of this widening gap between power and ethical standards of behavior. The gap has been dramatized in the discovery of the technique for atomic fission and in the immediate misuse of this discovery for dropping now archaic atomic bombs on Hiroshima and Nagasaki and for the subsequent stockpiling of improved—if the word can be used in this connection—atomic weapons on a scale that has put it within the power of human beings to destroy all life on this planet many times over.

It is hard to see how, in the atomic age, mankind can avoid committing mass-suicide if it does not raise the average level of its behavior to the level actually attained by the Buddha and by Saint Francis of Assisi. The founders and the later exponents of the higher religions and philosophies have spelled out, within the last twenty-five centuries, the standards of conduct that, in the atomic age, are required of everybody if mankind is to save itself from self-destruction. …

Ikeda: I agree entirely both that man has created his present crisis and that he holds the key to its solution. The way to transform moral sense into moral action is not to abandon the ego but, always regarding it in the proper light, to put it to active use at some times and to suppress it at others. As a concrete method, simply teaching control as a kind of knowledge and attempting to propagate it in this way are meaningless. A total reformation of the individual from below the depths of consciousness is essential. Of course, this reformation cannot be imposed from without. Instead, the individual, in striving to better his own personality, must consciously strive to effect his own reformation. At the least, a philosophy propounding the need for such a reformation must give its followers strength sufficient to the task. It is this kind of reformation that I mean by the human revolution. (pp. 305–06)