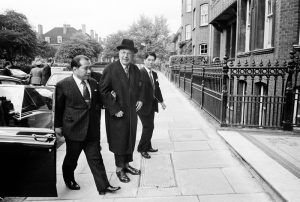 Ikeda Sensei and Arnold J. Toynbee in London, May 1973. Photo by Seikyo Press.

Arnold Toynbee had developed an interest in Buddhist philosophy toward the end of his life; and on his third trip to Japan, in 1967, through discussions with Buddhist scholars, he had learned about the Soka Gakkai and its president. Thus, the invitation read in part, “It is my pleasure, therefore, to extend to you my personal invitation to visit me in Britain in order to have with you a fruitful exchange of views on a number of fundamental problems of our time which deeply concern us all.”[1]

The invitation came amid the deepening geopolitical tensions of the Cold War; the protracted conflicts in Vietnam, Ireland and other parts of the world; racial injustice; germ warfare experiments; Nazi war crimes tribunals; and the list goes on.

Yet, as Sensei would later express, dialogue is the certain path to removing all obstacles that obscure our common humanity:

If one drop of the water of dialogue is allowed to fall upon the wasteland of intolerance, where attitudes of hatred and exclusionism have so long prevailed, there will be a possibility for trust and friendship to spring up.[2]

Dialogue as the Path to Peace

On May 5, 1972, 50 years ago this month, Arnold J. Toynbee and his wife, Veronica, welcomed Sensei and Mrs. Ikeda to their London apartment. It was a long-anticipated moment for both couples.

The men, one a Buddhist philosopher who came of age amid the ruins of war-torn Japan, and the other, a historian raised in the Judeo-Christian tradition, commenced a dialogue that would span 40 hours across 10 days, culminating in the publication of Choose Life.

Their discussions, held in May 1972 and May 1973, were later divided into three parts: “Personal and Social Life,” “Political and International Life” and “Religious and Philosophical Life.” Their aim was to leave a roadmap to solving global issues and achieving peace for future generations.

Choose Life would subsequently be translated into over 30 languages, studied in university classes worldwide and read by heads of state, university presidents, cultural figures and leading thinkers around the world.

What’s more, Sensei’s discussions with Toynbee informed his commitment to dialogue as a force strong enough to lead humanity from war and hatred to peace and coexistence. They also inspired Sensei to engage in over 1,600 subsequent dialogues with academics, artists and world leaders.

Arnold Toynbee, born in London in 1889, was named after his uncle, who had died six years earlier at 30. His father, Harry Valpy Toynbee, was a physician and activist for social welfare, while his mother, Sarah Edith, was a historian. His formative experience came in 1921, when he traveled as a journalist to observe the war between Greece and Turkey. The situation on the ground contradicted what the British media had been reporting, so Toynbee offered new perspectives. This endeavor led him to begin writing his seminal 10-volume work, A Study of History. Sensei writes about his impressions of Mr. Toynbee:

Toynbee had departed from the traditional Western-oriented view of history. Much of history can be said to have been written from the standpoint of the victors. The stories of the peoples and nations who conquer others become the official history, while those of the defeated are dismissed and forgotten. But Toynbee shed light equally on the side of subjugated peoples and civilizations as well.[3]

An Encounter Realized and An Unexpected Challenge 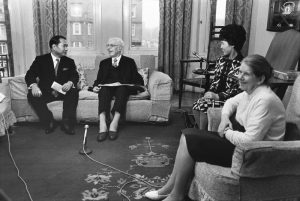 The two men began delving into core issues facing humanity. It wasn’t long, however, before they hit an obstacle. It seemed the interpreters didn’t fully grasp what Toynbee was saying and further, the historian was having a hard time understanding their interpretations of Sensei’s points. Then, Sensei suggested to the perspiring interpreters:

If there’s something you don’t fully understand, leave it. Later, you can listen to the tape together and translate it into the correct Japanese.

I’ll then read your translation and think of my responses to Toynbee’s questions as well as come up with further questions. We can give Toynbee my replies as well and ask him to respond to my new questions at our next meeting.[4]

Due to the difficulty of simultaneous interpreting, Sensei made sure that the dialogue was recorded. After they finished their discussions for the day, interpreters and local SGI-UK members gathered to transcribe the recorded dialogue. From there, the script was translated into Japanese and relayed to Sensei, so it wasn’t until late at night when he could begin preparing his responses to Toynbee’s assertions and questions. One evening, when Sensei dropped by to thank the members transcribing and translating the dialogue, he encouraged them, saying:

Sitting here quietly transcribing these tapes is not the most glamorous of work. But just because something is conspicuous doesn’t mean it creates value. Actually, many of the significant changes in the world and society have been the result of steady, inconspicuous efforts over time. What you are doing now is certain to shine through the ages, and I am sure your participation in this endeavor will become a tremendous source of pride throughout your lives. Let’s work together to make history.[5]

Due to these volunteer members working hard alongside their mentor, the dialogue proceeded smoothly, and to this day is having a lasting impact on peace.

Despite hailing from different cultural, religious and linguistic backgrounds, Sensei and Arnold Toynbee found common ground on a number of themes. For example, Toynbee elaborated on the definition of a “higher religion” as that which empowers the individual to have direct contact with the ultimate spiritual reality. Sensei explained that is indeed the aim of Buddhist practice. Sensei recalls the key issues on which they came to a mutual understanding:

[We] agreed completely on the idea that to attain self-mastery, which was the aim of religion, it was necessary to merge the self-centered individual self with the universal self, or the fundamental Law of the universe that is the ultimate spiritual reality.

[We] also shared an awareness of the importance of world unity in order to avoid the looming threat of humanity’s destruction.[6]

While they agreed that unifying the world under a governing body would be necessary to achieve global peace, they didn’t arrive at a consensus on how that would be realized. Ultimately, Toynbee believed that the only way to unite the world would be to implement a world government, whereas Sensei shared his feeling that a unified world could come about based on the people’s self-motivated wish to do so. Toward the end of their dialogue, however, Toynbee seemed to entertain the possibility of Sensei’s vision. Sensei writes about this:

Toynbee went on to say that he doubted humankind would be able to survive without such unification and that he was therefore not very hopeful about the future. He then looked intently at Shin’ichi [Yamamoto][7], who nodded in understanding as he met the historian’s gaze, his heart filled with resolve to ensure humanity’s continuation.

Toynbee then said quietly, a trace of a smile on his lips, “However, a sudden widespread change of heart through revolution on the religious plane is not impossible, and this might save the situation.” Perhaps he had discovered fresh hope in Shin’ichi’s firm determination to realize happiness and peace for all.[8]

Scholars have noted that the men shared at least three philosophical views: that a spiritual dynamic underlied the great movements in history; the concept of “challenge and response,” the view that a civilization would continue to develop as long as it rose to accept various problems and obstacles as challenges, responding to them by growing stronger themselves; and the conviction in the emergence of a global civilization. 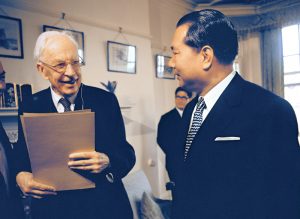 Ikeda Sensei and Arnold J. Toynbee in his home to complete their discussion that had begun the previous year, London, May 1973. Photo by Seikyo Press.

On May 19, 1973, the final day of their dialogue, Sensei asked Toynbee if he had any advice for him, to which Toynbee responded, “I think it rather impertinent for me to give personal advice to Mr. Ikeda, because I am an academic person, and he is a man of action,”[9] and he voiced his hope that Sensei would continue on his path of the Middle Way.

As their meeting drew to a close, Sensei asked Toynbee what grade he would give him as a graduate of “Toynbee University.” He responded that he would give him an A and explained that the letter was derived from a drawing of an ox’s head with its horns upside down, expressing the power of will and determination. To this, Sensei responded:

To me, the horns of the ox symbolize the fighting spirit to courageously challenge any evil or injustice. Having received an A from you, Professor Toynbee, I am further determined to struggle against all negative forces that seek to bring suffering to humanity.[10]

After the Toynbees saw off Sensei and Mrs. Ikeda, Arnold Toynbee handed a note to the European SGI leader who had supported the dialogue. This note listed names of Toynbee’s friends who he felt would have a fruitful exchange with the Soka Gakkai president. Included on this list were Club of Rome co-founder Aurelio Peccei, French author Andre Malraux and French art historian Rene Huyghe, all of whom Sensei eventually met, their productive dialogues published in book form.

Sensei’s dialogue with Arnold Toynbee opened the doors to peaceful exchange in other important ways. In 1984, Brazilian President João Figueiredo personally invited Sensei to the country. In preparing for the meeting, chief of staff João Leitão de Abreu asked a Soka Gakkai representative, “What kind of person is SGI President Ikeda?” When the representative presented several of Sensei’s dialogues, Mr. Abreu said he had purchased a copy of Choose Life on a visit to London. Finding it insightful, he had read it several times.

Mr. Abreu then made a request: “After meeting with President Figueiredo, I’d like to meet with the SGI president, if only for a brief moment.”[11]

On another occasion, Soka Gakkai President Minoru Harada recalls supporting Sensei’s meeting with Indonesian President Abdurrahman Wahid. Early in their dialogue, President Wahid mentioned to Sensei, “I have wanted to meet and speak with you since reading Choose Life. … The opportunity has arrived at last.”[12] Mr. Harada relayed his astonishment when hearing that President Wahid had read Choose Life 10 times.

Sensei’s dialogue with Arnold Toynbee set in motion a wave of dialogue and cultural exchange with more than 1,600 world leaders, forging ties of trust between people, cultures and nations. Now, more than ever, dialogue will create the necessary conditions to build mutual understanding and support across cultural and national boundaries, uniting our world in the common cause of human happiness and harmony with nature. SGI members in 192 countries and territories have inherited Sensei’s spirit of dialogue and are working tirelessly to connect to people’s hearts in their respective communities and bring about a Century of Life.