Our behavior makes all the difference.

What effectively conveys the greatness and power of our Buddhist teaching and practice is nothing but our respectful, humanistic actions.

As Nichiren Daishonin states: “The purpose of the appearance in this world of Shakyamuni Buddha, the lord of teachings, lies in his behavior as a human being” (“The Three Kinds of Treasure,” The Writings of Nichiren Daishonin, vol. 1, p. 852).

No matter how lofty a religious teaching, it comes alive and is meaningful only when those who profess faith in it apply it to their daily lives.

“The treasures of the heart in themselves may be invisible to the eye,” Ikeda Sensei says. “But when these inner treasures are given concrete expression as respectful actions toward others, they demonstrate and prove to others the power of the Mystic Law and the Buddha nature” (The Teachings for Victory, vol. 1, p. 198).

Live With the Heart of a Lion King

The phrase “teacher of the Law” describes practitioners who thoroughly develop their lives through Buddhist practice, are well versed in Buddhist teachings and strive to convey them to others to lead them to enlightenment. A teacher of the Law serves as a role model in applying Buddhism to all aspects of life.

The three founding Soka Gakkai presidents stand as unmatched examples of the selfless spirit and action to spread the Law just as Nichiren taught. They faced all manner of difficulties in sharing Buddhism for the happiness for all people. Based on the Daishonin’s teaching, this alone qualifies them as genuine teachers of the Law.

Unfortunately, countless religious leaders preach convincingly about the righteousness of their teachings but spend more time and energy judging others than being examples. What’s more, many glorify such leaders, paying more attention to what they say than what they do.

Nichiren committed himself to rooting out such “false sages” in the Buddhist community of his time. His strict refutations of the contemporary Buddhist schools derived from his desire to see the ideals of Buddhism reflected in the selfless, wise and compassionate behavior of its leaders.

For instance, in “Letter from Sado,” he writes:

It is the nature of beasts to threaten the weak and fear the strong. Our contemporary scholars of the various schools are just like them. They despise a wise man without power, but fear evil rulers. They are no more than fawning retainers. Only by defeating a powerful enemy can one prove one’s real strength. When an evil ruler in consort with priests of erroneous teachings tries to destroy the correct teaching and do away with a man of wisdom, those with the heart of a lion king are sure to attain Buddhahood. Like Nichiren, for example. I say this not out of arrogance, but because I am deeply committed to the correct teaching. (WND-1, 302)

The Daishonin consistently emphasized that all people, no matter their social standing, occupation or background, deserve respect. And he modeled his conviction in the way that he supported, encouraged and communicated with his disciples. Whether they were farmers, samurai warriors, widows or government officials, Nichiren always expressed utmost respect, care and appreciation for them.

Who Are the True Teachers of the Law?

As Buddhists, our behavior is paramount.

Sensei asserts that expressing our respect for others is essential to revealing our enlightenment. He says, “The aspiration of leading all people to enlightenment would just be a pipe dream unless the Buddha taught the importance of our behavior as human beings” (The Teachings for Victory, vol. 1, p. 199).

The Nichiren Shoshu priesthood, however, exemplifies behavior that directly opposes Nichiren’s emphasis to respect others.

What is the standard for the priesthood? It is the belief that the high priest is absolute and infallible, based on their claim that one high priest secretly transmits a mysterious heritage to the next one. Yet no line in Nichiren’s writings support this view, and it directly conflicts with his teaching.

The priests also contradict a core message of the Lotus Sutra: that all people equally possess both Buddhahood and the ability to bring it forth. Rather, they insist that they are inherently superior to lay practitioners.

Thus, true teachers of the Law continue to deepen their own understanding of Buddhism while taking action to share in people’s suffering and leading them to enlightenment.

Ultimately, it is in chanting Nam-myoho-renge-kyo, spreading Buddhism’s ideal of respect for self and others, and engaging in our own inner transformation that we can demonstrate through “our behavior as human beings” the transformative power of the Mystic Law. 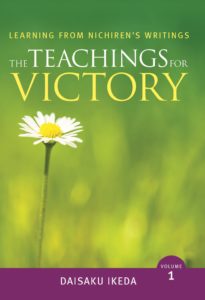 Interested in learning more about how we can accumulate the treasures of the heart through our Buddhist practice? The Teachings for Victory, volume 1, contains Ikeda Sensei’s three-part lecture on “The Three Kinds of Treasure.” Visit bookstore.sgi-usa.org to purchase a hard copy for $7.95 or e-book for $5.99.