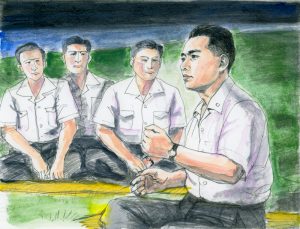 From that summer and continuing into the fall, Shin’ichi embarked on a full-fledged program of training for youth.

He intended to make the upcoming July 30 and 31 outdoor training camp for the young men’s Suiko-kai a fresh start for those shouldering full responsibility for kosen-rufu. However, seeing that participants had neither the determination nor passion for kosen-rufu, he spoke strictly to them to rouse their awareness as disciples, and to help them develop into great leaders for kosen-rufu and live the most magnificent lives.

Also, on July 31, the young women’s Kayo-kai members held an outdoor training camp a few hours away from the young men. From the afternoon, Shin’ichi joined them for various activities, including a strenuous game of dodge ball, creating indelible memories with the participants.

In addition to these youth training camps, from August 6–9, Shin’ichi attended the Soka Gakkai’s traditional summer training course for roughly 8,000 mid-level leaders who gathered from throughout Japan. He viewed this training course as a perfect opportunity to raise people who would play a pivotal role as the driving force for achieving a membership of 3 million households. With this in mind, after much consideration, he lectured on “The Twenty-Six Admonitions of Nikko,” convinced that the Soka Gakkai had advanced in direct accord with these eternal guidelines.

Following the training courses and after concluding guidance trips to various areas throughout Japan, Shin’ichi also attended several youth division athletic meets, which were taking place in each region.

In September, at the Third Festival of Youth, the national Soka Gakkai sports meet held at Tokyo’s National Athletic Stadium, Shin’ichi stated that he would entrust the spiritual baton of kosen-rufu, which he had received from his mentor, to the youth so that they could put the finishing touches on the kosen-rufu movement. 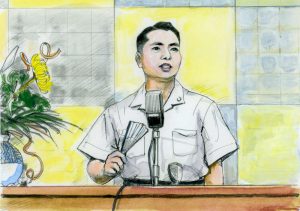 A Battle Against Stagnation

At the Second Women’s Division Convention, held in Tokyo on July 22, 1960, Shin’ichi Yamamoto speaks about battling against impasse.

He then related his own experience as a youth: “The period of President Toda’s harrowing struggle to rebuild his business after the war was also the most painful time in my own life. My health was extremely poor, my wages continued to be in arrears, and I pushed myself beyond my limits day in and day out.

“I once let some words of defeat slip in Mr. Toda’s presence. I’ll never forget his stern reproach: ‘Shin’ichi,’ he said, ‘faith is a never-ending battle against impasse. It is a struggle between the Buddha and devilish functions—between negative and positive forces. This is the meaning of the phrase Buddhism is concerned with winning.’”

Shin’ichi continued: “Everyone encounters an impasse at some point in life. Some people may experience a deadlock in business. A couple may come to a standstill in their relationship. Some may feel they have reached a stalemate in raising their children, in their relations with other people, in their propagation activities or in their study of Buddhist teachings.

“However, the power of the Gohonzon is immeasurable, as vast as the universe itself. Our lives, too, have infinite potential. Everything hinges, therefore, on whether we allow our inner determination to become deadlocked. When we truly grasp this point, the path to victory is already open.

“Should you feel stuck, please challenge to overcome your own weakness, summoning the great power of faith. President Toda said that this is how to ‘discard the transient and reveal the true’ in our own lives …

“Therefore, whenever you encounter a difficulty, I hope you will view it as a struggle against an impasse, as a battle against obstacles and, resolving that now is the time to win, boldly forge your path in life as you challenge your destiny head-on.” (NHR-2, revised edition, 86–87) 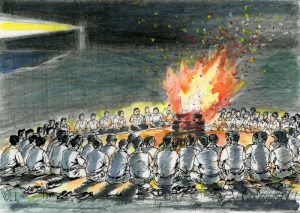 Transcending the Barriers of Conflict

At an outdoor training camp for the young men’s Suiko-kai, held at Inubosaki in Chiba Prefecture, Shin’ichi answers questions from the youth.

One youth asked: “The standoff between Eastern and Western blocs is growing more and more serious. Could we regard this as a manifestation of the disaster of internal strife described by Nichiren Daishonin?”

“Yes, I think we can. As a result of advances in transportation and communications, today’s world has grown much smaller. The earth is now like one large country. In this respect, we could say that East- West confrontation corresponds to the ‘disaster of internal strife’ the Daishonin referred to in his day.

“The time has come for those of us who embrace Nichiren Buddhism to take a stand for world peace and the happiness of all people. A humanistic philosophy that restores the focus to the human being and transcends the barriers of conflict arising from differences in ideology will hold the key to peace in the future. This philosophy is Buddhism.”

“Irrespective of how sophisticated a country’s social systems or overall environment may be, these things alone are not sufficient to solve spiritual problems, such as how to overcome human suffering and nurture a desire for self-improvement and a spirit of independence. Continued rejection of religion will lead only to spiritual stagnation and desolation. Therefore, any country seriously concerned about how best to develop and elevate the human spirit will be forced to acknowledge the pressing need for a genuine religion.

“For that reason, too, it is important that we carry out dialogue with the leaders of each country. When trust and empathy are forged through dialogue, it will be possible to open people’s eyes to Buddhism naturally.

The family is a “garden” of value creation built through the joint efforts of its members. It is an oasis of tranquillity and revitalization that restores one’s energy and vigor to face the new day. It may also be described as the soil in which human character is cultivated. (NHR-2, revised edition, 81)

Volume 2: Chapter Four—Banner of the People