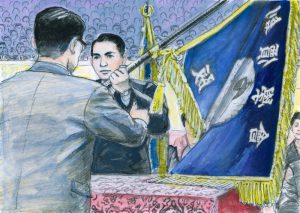 When he was inaugurated as the third Soka Gakkai president on May 3, 1960, Shin’ichi Yamamoto had launched a new beginning for the organization, pledging to accomplish a membership of 3 million households by the seventh memorial[1] of his mentor, second Soka Gakkai President Josei Toda, just four years away.

To kick things off nationally, less than a week following his inauguration on May 8, he participated in the Kansai General Chapter Leaders Meeting. The Soka Gakkai organization in Kansai, which until then comprised eight chapters, had grown to 18 chapters. To signal this fresh start, he personally handed a chapter flag to each new chapter leader as he offered words of encouragement.

The next day, on May 9, he returned to Tokyo to attend a young women’s leaders meeting. He stressed that discussion meetings and study are the pillars of Soka Gakkai activities. At the young men’s division leaders meeting held the following day, he gave guidance and expressed his high hopes for the youth to take the lead, stating in part, “Strive to make [the discussion meeting] a great success through your efforts as youth division members!” (The New Human Revolution, vol. 2, revised edition, pp. 25–26).

Exactly 700 years after Nichiren Daishonin submitted his treatise “On Establishing the Correct Teaching for the Peace of the Land,” Shin’ichi traveled to Okinawa for the first time on July 16, 1960. The next day, he attended the inaugural meeting for Okinawa Chapter at which he stressed that the Soka Gakkai’s goal for kosen-rufu was to eradicate the word misery from the face of the earth and realize world peace.

He visited World War II battle sites where fighting between American and Japanese forces took place on the island. Based on the tragic history of war that played out in Okinawa, he felt that this would be a most fitting place to write a biographical novel about Mr. Toda. On his first trip to Okinawa, on July 18, 1960, Shin’ichi Yamamoto visited World War II battlefields in the southern region of the island and arrived at Mabuni Hill.

Now, the great current of peace set in motion by Josei Toda brought beautiful waves of happiness to ripple across the tormented isles of Okinawa—gold and silver waves reflecting the members’ joy and hope.

Shin’ichi Yamamoto thought he would soon have to start work on the biographical novel he had been planning to write for some time as a permanent record of his mentor’s noble achievements. Before that, however, he had a pledge to fulfill: the accomplishment of Toda’s will to achieve a membership of 3 million households. Before commencing work on the narrative, Shin’ichi wanted to report the successful realization of this goal to Toda by the seventh memorial for his mentor.

Toda had been a man of action. Shin’ichi felt he could not fully convey his mentor’s spirit in a book unless he himself launched a struggle for kosen-rufu and laid an unshakable foundation for world peace. This was because a written work is an expression of its author, a reflection of that person’s life state.

It suddenly occurred to Shin’ichi that Okinawa would be the most fitting place to begin writing his manuscript once he had honored the seventh memorial for his mentor with a brilliant victory.

After they had finished viewing the monuments, the local members gathered around him.

“Centuries ago,” Shin’ichi remarked, “hoping to make these islands a bridge to the rest of the world, the Ryukyu king Sho Taikyu commissioned the casting of the Bridge of Nations Bell and had it hung in the main hall of Shuri Castle. The spirit of peace resides in Okinawa. It is your mission to become the vanguard in building a bridge to the world with that same spirit.” (NHR-2, revised edition, 73–74)

There is a difference between being a follower and a successor. Followers are those who position themselves in the rear safely away from the real struggle, and remain ignorant of the hardships involved in pioneering a movement. Those who merely follow someone else’s lead cannot possibly fulfill the responsibility required of successors. A true successor must stand in the vanguard and raise the flag of victory. (NHR-2, revised edition, 19)