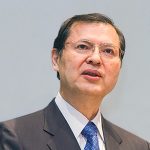 I would like to offer three perspectives from which to study volume 2 of The New Human Revolution.

The first is how the Soka Gakkai organization and its leaders should conduct themselves. Volume 2 covers the period from Shin’ichi Yamamoto’s inauguration as third president on May 3, 1960, until December of that year, and describes how he encourages the members throughout Japan. It details how he travels across the country from Hokkaido in the north to Okinawa in the south, personally taking the initiative to offer words of encouragement to individual members. As a result of his strenuous efforts, the organization develops dramatically, with the number of chapters nationwide expanding from 61 prior to his inauguration to 124 just eight months later.

In the first chapter, “Vanguard,” Shin’ichi expresses his great expectations for the development of the members of the young men’s, young women’s and student divisions. Then, in the “Training” chapter, which depicts the Second Women’s Division Convention, he speaks on the theme of battling the deadlocks experienced in life. The important guidelines he set forth at that time still have relevance for us today.

Throughout volume 2, there is an emphasis on how the Soka Gakkai organization and its leaders should conduct themselves, as seen for example in the following passage from the “Vanguard” chapter, in which Shin’ichi stresses that the organization exists for the development of the members’ faith:

To establish a solid base for kosen-rufu, it was imperative that they quickly establish more chapters around the country. The presence of local organizations would serve without fail to accelerate the progress of faith, practice and study. It was also vital that they function to nurture people’s development, like soil nourishing the growth of majestic trees.[1]

He also warns of the dangers of leaders losing sight of the movement’s true purpose:

Every movement must constantly reconfirm its goals and objectives, returning always to its prime point, to the reason for its existence. Otherwise, there is a danger of methodology becoming all important, obliterating the movement’s original objective. When this happens, even a movement that may at one time have achieved apparently spectacular growth will find its wheels spinning uselessly and in the end grind to a halt.[2]

The “Courageous Endeavor” chapter clarifies that “Soka Gakkai positions are not positions of prestige but of responsibility.”[3] Shin’ichi also asserts: “Buddhism is win or lose. It is an endless struggle against obstacles.”[4] He explains that the confident prayer and unwavering resolve of those in leadership positions are the key to conquering negative functions.

In 1960, the year Shin’ichi was inaugurated as Soka Gakkai president, the organization saw rapid growth with the creation of numerous new chapters. Many chapter leaders learned how to perform their roles by modeling themselves on Shin’ichi’s behavior, which was always based on protecting and encouraging the members. We must never forget this crucial point.

A thriving organization is one whose leaders make steadfast and sustained efforts to improve and develop. On the other hand, if the leaders lose their passion to fight for kosen-rufu, the organization will become bureaucratic. [As described in “Banner of the People,”] let us, therefore, as leaders of kosen-rufu, engrave in our hearts the determination always to be “dedicated people of great warmth and consideration who give unsparingly of themselves.”[5]

For the Peace of the Land

The second perspective is how to respond to natural disasters. Volume 2 refers to two such disasters: the devastating Chilean Earthquake and resulting tsunami that struck the coast of Japan in May 1960, and a nightmarish typhoon that had pummeled Ise Bay, mainly affecting Aichi and Mie prefectures, in September 1959.

Having heard on the news about the catastrophic earthquake in Chile, Shin’ichi gets up several times during the night to listen for updates on the radio, deeply concerned about the damage the quake inflicted on the Chilean people as well as the impact the resulting tsunami would have when it struck Japan.

In the morning, he hurries to the Soka Gakkai Headquarters and sends off a series of telegrams to the areas that had in fact been stricken, expressing his condolences and offering encouragement to those affected. He also dispatches leaders to those areas that had suffered the greatest damage and gives instructions to set up a disaster relief action center to coordinate relief activities.

How people respond in times of crisis reveals their sense of responsibility. In contrast to the Soka Gakkai’s rapid response, the government was extremely slow in taking action. It is this experience that powerfully drives home to Shin’ichi the need to realize the principle of “establishing the correct teaching for the peace of the land”—a central tenet of Nichiren Buddhism.

The “Training” chapter also describes how Shin’ichi had responded to the devastating typhoon that struck Ise Bay the previous year. He immediately arranged relief efforts and visited the affected areas to personally encourage the members:

You’ve suffered a terrible disaster, but your fellow members around Japan are sending their daimoku and praying for your recovery. This is a time of trial. Please triumph over this obstacle with faith.

Even if your homes have been destroyed and your belongings washed away, as long as your faith remains sound, then you can definitely rebuild your lives. If you steadily persevere in faith, you will get back on your feet again without fail.[6]

The way Shin’ichi encouraged the victims and the Soka Gakkai’s relief efforts following these natural disasters represent the model on which our present-day disaster relief activities are based.

The final perspective I would like to offer relates to the Soka Gakkai as a religious organization that forever stands on the side of the people.

This volume was serialized in the Seikyo Shimbun between June and December 1994, a year the Soka Gakkai had designated as “Soka Renaissance—The Year of Glory.” This theme of “Soka Renaissance” had started in 1992, shortly after the Soka Gakkai had achieved its spiritual independence from Nichiren Shoshu in November 1991. This had finally allowed it to spread its wings as a truly global religious movement.

Given that this was the context in which the volume was written, there are a number of references to the Nichiren Shoshu priesthood. In the “Training” chapter, Shin’ichi delivers a lecture on the “Twenty-six Admonitions of Nikko” at a summer training course. While giving the lecture, he “silently hoped and prayed for the day when the priesthood would awaken to Nikko Shonin’s injunction”[7] [to hold in great esteem practitioners who treasure the Law more highly than their own lives].

Moreover, in the “Banner of the People” chapter, Shin’ichi states: “Should there ever be evil-natured priests who look down on these members, […] the Soka Gakkai would be forced to fight resolutely against such individuals.”[8] It was his profound wish that the Nichiren Shoshu priests never become corrupt and degenerate. And yet, the priesthood had repeatedly brandished their clerical authority with the aim of controlling and dominating the Soka Gakkai members.

We must resolutely fight against devilish forces that look down on and exploit our members; if we don’t, they will destroy our noble organization dedicated to kosen-rufu.

In the “Banner of the People” chapter, we find the passage:

The Soka Gakkai stands forever on the side of the people. It is thus certain to be persecuted again in the future. Plots will be waiting to ensnare it. The Soka Gakkai’s destiny, however, is to fight like the lion king and triumph for the eternal prosperity of the people.[9]

In a speech he delivered in December 2000, President Ikeda introduced a new series of Seven Bells, sharing his vision for the Soka Gakkai’s eternal victory into future centuries. With the awareness that our mentor is counting on us to realize his grand vision for the future of kosen-rufu, let us advance with the pride that the Soka Gakkai will forever stand on the side of the people.

Translated from the November 28, 2018, issue of the Seikyo Shimbun, the Soka Gakkai’s daily newspaper. 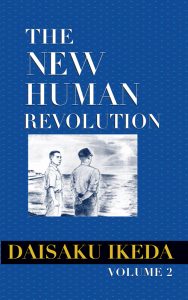 Vanguard
Immediately after his inauguration as third president, Shin’ichi Yamamoto travels throughout Japan, including Okinawa, which had not yet been returned to Japan, vowing to make it a land of peace and happiness.

Training
Shin’ichi dedicates himself to fostering core individuals for kosen-rufu. He gives guidance at outdoor training sessions for the young men’s and young women’s divisions (Suiko-kai and Kayo-kai) and a summer training course.

Courageous Endeavor
Soon after his return from North and South America, Shin’ichi attends inaugural meetings for various chapters in Japan, including Chiba.

Banner of the People
Shin’ichi goes on guidance tours to the Tohoku, Kyushu, Kansai and Chugoku regions, and discusses the importance of the home environment in education.