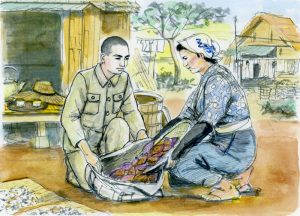 On November 4, upon returning from his journey to North and South America, Shin’ichi Yamamoto attended the inaugural meeting for Maebashi Chapter in Chiba Prefecture. Passing through Makuhari, he reminisced of coming to this rural area to buy food for his family during the food shortage immediately after the war and how a farmer’s wife had shown him kindness.

On November 6, he attended the Ninth Young Men’s Division general meeting in Yokohama. The next several days, from November 7–13, Shin’ichi traveled to Numazu, Kofu, Matsumoto, Nagano, Toyama and Kanazawa to attend inaugural chapter meetings in each locale.

In between each activity, Shin’ichi had meaningful exchanges with the local members. In Numazu, he courteously greeted the wife of the chapter men’s leader, demonstrating the importance of showing consideration to the family members of leaders. On the train from Matsumoto to Nagano, he spoke at length with the father of a young women’s leader whose business had failed. After the chapter meeting in Nagano, Shin’ichi had an informal discussion with chapter leaders at the Saihokukan, the inn where he was staying. And to a young man concerned about his educational background, he said, “There’s no need to lose confidence because you lack a formal education; the main thing is to do your best where you are, in a way truest to yourself” (The New Human Revolution, vol. 2, revised edition, p. 213). After encouraging him, Shin’ichi sang a song to mark a new start for this young man.

At each turn, through his own behavior, Shin’ichi demonstrated to these new chapter leaders that supporting and encouraging the members is the essence of being a leader.

On November 18, he attended the 17th memorial service for founding Soka Gakkai President Tsunesaburo Makiguchi. Honoring his conviction in the freedom of religious beliefs, Shin’ichi’s heart blazed with the resolve to see to it that President Makiguchi’s achievements be honored eternally throughout the world. 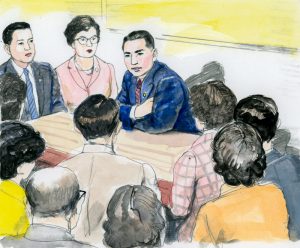 After the inaugural meeting of Kofu Chapter on November 9, 1960, Shin’ichi encourages a young women’s division member.

A young woman then asked: “My mother doesn’t practice this faith, so whenever I return home and see her face, my joy immediately subsides. What should I do?”

“We practice Nichiren Buddhism to make our homes bright and cheerful,” Shin’ichi Yamamoto replied. “What’s the point, then, if you go home and allow yourself to become glum and disheartened? Also, if you really wish for your mother to begin practicing this Buddhism, then you yourself will have to change. You can preach loftily to your mother about Buddhist doctrine all you like, but the bottom line is that she will always see you as just her daughter. Therefore, rather than spending time lecturing her, it is far more valuable for you to become a daughter who is so sweet and considerate that your mother will be truly impressed. For instance, if you travel to Tokyo to attend a headquarters leaders meeting or something, you should be thoughtful enough to buy her some small souvenir. And when you arrive home, you could greet her courteously and voice your sincere appreciation for her taking care of things while you were away.

“Faith is nothing extraordinary. Your daily actions and conduct are manifestations of faith. If you become a daughter of whom your mother can be truly proud—about whom she can remark ‘She’s turned out really well. I’m so proud of her,’ I guarantee she will take faith. The vision your mother has of you will determine whether you can successfully introduce her to this practice.” (NHR-2, revised edition, 192–93)

Giving guidance to individuals or families is an extremely time-consuming, inconspicuous activity, but it serves to nurture the “roots” of people’s faith. Only when a tree’s roots spread and sink down deep into the ground can it grow toward the heavens and bring forth green leaves and branches.

In much the same way, the source of all development in the realm of kosen-rufu lies in sharing the sufferings of the members, answering their questions so as to relieve them of any doubts, and making it possible for them to joyously exert themselves in faith filled with confidence and hope. (NHR-2, revised edition, 161)

Excerpts From Nichiren’s Writings in Volume 2

Excerpts From Nichiren’s Writings in Volume 1