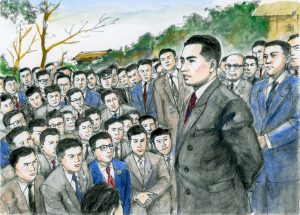 On November 20, at the Eighth Young Women’s Division General Meeting, citing Josei Toda’s guidance to the young women to “please become happy,” Shin’ichi Yamamoto urged them to wholeheartedly dedicate their lives to kosen-rufu, the true path to happiness.

Toward the end of the month, he traveled to Tohoku, the northeastern region of Japan, to participate in a series of chapter inaugural meetings. At gatherings for Yamagata, Minami-Akita and Iwate chapters, he stressed that the Soka Gakkai stands forever on the side of the people.

After returning to Tokyo, at the Second Student Festival of the student division, Shin’ichi touched on the relationship between Nichiren Buddhism and other philosophies.

In December, his schedule became even more hectic. On the fourth, he participated in the inaugural meeting for Kyushu’s Oita Chapter in southwest Japan. To youth who were outside supporting the meeting behind the scenes, he said, “I’d like you to develop yourselves as you fight and advance in the realm of kosen-rufu, aiming at 10 years from now as an immediate goal” (The New Human Revolution, vol. 2, revised edition, p. 289).

On the fifth, he attended a meeting in Osaka in which the Kansai region was reorganized into three general chapters. He also attended the Tokushima Chapter inaugural meeting on December 6 and the completion ceremony for the new Chugoku Headquarters building on the seventh.

Thinking ahead about the following year’s activities, he poured his energy into ensuring that the year ended in success. One night, as the year came to a close, Shin’ichi returned home earlier than usual—a precious occasion that he used to enjoy time with his family.

Since his inauguration, he had worked without a moment’s rest. The membership had grown to 1.7 million households, while the number of chapters had increased to 124. Holding high the banner of the people, Shin’ichi vowed to succeed, waiting to launch anew the second chapter of his struggle. 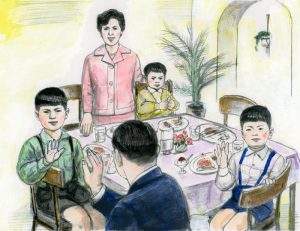 Shin’ichi always strove to keep promises he made to his children.

One night, wanting to eat dinner with his family at least once or twice a year, he had promised to join them. But commitments at work prevented him from returning home early enough to do so. He decided instead to meet his family for dinner at a restaurant about a 10-minute drive from the Soka Gakkai Headquarters. On the appointed day, however, a number of unexpected briefings and a meeting were added to his schedule for that evening. This left him with only about 20 or 30 minutes to get to the restaurant, have dinner with his family and return to the headquarters. Still, Shin’ichi went. He could spend only 5 or 10 minutes with them before he had to get up to leave.

Trust between parent and child begins with keeping promises. Certainly, at times, promises are unavoidably broken. But when a parent sincerely strives to make good on that promise in some form, the child will understand and appreciate that effort. This is what forges bonds of trust.

Watching Shin’ichi’s hurried departure, Mineko said to the children: “Daddy is so busy that he really hasn’t got time to be with us like this, but he kept his promise and did his best to come even for just a little while. We’re very lucky, aren’t we?”

Just as the speed of the approach determines the power of an athlete’s jump, victory or defeat in activities for kosen-rufu will be decided by the thoroughness of the preparations. At the moment the athlete launches into the air, the outcome has already been virtually decided. (NHR-2, revised edition, 302)