Ikeda Sensei has had dialogues with leading figures throughout the world to advance peace. To date, more than 80 of his dialogues have been published in book form. This series highlights one dialogue a month. The following excerpts are from Our World to Make (pp. 145–49). 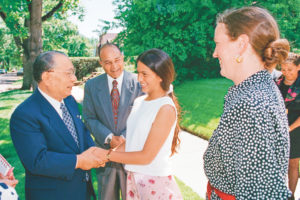 Ikeda Sensei: When we talk about human dignity, one issue that we must not overlook is poverty. Despite the growth that the world economy has recorded over the past 30 years, poverty has increased dramatically. …

Ved Nanda: The sincerity and passion embodied in your message on eradicating poverty have resonated with policymakers who have the wisdom and vision to appreciate the debilitating impact of poverty on a large segment of the Earth’s population and how it violates one of the most fundamental human rights. If people’s basic needs are not met, all other rights are illusory.

Ikeda: The philosopher Karl Jaspers once cautioned us against being lulled into complacency by an illusory peace because “we can enjoy the happiness of existence in the interim granted to us. But it is a last respite. Either we avert the deadly peril or prepare for the catastrophe.”[1] We need to recognize the seriousness of poverty, which is on the brink of erupting, with explosive consequences. The SGI has long been deeply concerned about poverty and the refugee problem, engaging in initiatives to ameliorate these.

Nanda: The SGI’s work with the UN High Commissioner for Refugees on its refugee campaign and your organization’s literacy campaign in the Third World are indeed praiseworthy. …

Ikeda: The leaders of the industrialized countries must realize and take more seriously the destabilizing threat that poverty poses to the global social order. As Mahatma Gandhi states, “True economics … stands for social justice, it promotes the good of all equally, including the weakest.”[2] We must recognize that something is terribly off kilter when the economic system contributes to increasing impoverishment and when society abandons its most vulnerable suffering in poverty. …

Nanda: Following the achievements of the 1992 Earth Summit, the 2002 Johannesburg Summit attracted attention as a historic international gathering, but unfortunately it has failed to produce significant results.

Ikeda: To solve the difficult world problems we face, it is important that we undertake a global transformation in awareness as well as in behavior.

In Buddhism, the Shrimala Sutra shares the pledge of Shrimala, a woman who lived during Shakyamuni’s time:

Lord, from now on, and until I attain enlightenment, I hold to this sixth vow, that I shall not accumulate wealth for my own use, but shall deal with it to assist the poor and friendless.[3]

Bodhisattvas use their wealth to relieve the poverty, suffering and hardship of others. They do not accumulate wealth for the sake of their own pleasure and avarice but to help others. I believe that the people of the industrialized countries should adopt such a bodhisattva practice as their model of behavior.

Nanda: In the final analysis, lasting world peace is not possible without humanity’s firm commitment, followed by concrete action, to eradicate poverty. …

Ikeda: In this context, it is imperative that we rethink the basic foundation of our civilization and way of life.

Buddhism identifies the source of illusions and base impulses as greed, anger and foolishness. Greed is seen as the root of poverty, anger as igniting conflict and foolishness as giving rise to various epidemics.

Greed, an extreme form of egoism, sacrifices others for the sake of one’s unrestrained desires. It is an insatiable craving that drives one to expropriate others’ possessions even after one’s own basic needs have been met. Various religions, including Buddhism and Hinduism, teach that avarice should be controlled and sublimated into altruism.

The essential key to the attainment of a peaceful global society that provides for the happiness and well-being of all people is the establishment of a network of global citizens awakened to these high moral standards.

• Ved Nanda has worked for many years as a professor at the University of Denver’s Sturm College of Law.

• He has also taught at many universities, including the University of San Diego, Florida State University and Evans University.

• He has served as vice provost for the University of Denver since 1994.

• Among many positions of international service, Dr. Nanda was president of the World Jurist Association and is now its honorary president. He is also on the advisory council of the United States Institute of Human Rights.