Living Buddhism: Lenny, we understand that you fulfilled a longtime dream of starting a company and did so during the pandemic no less. When did you realize that you wanted to start your own business? 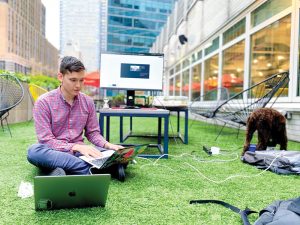 Lenny Bogdonoff: I had a vague yearning for some time, but when I moved to New York in 2013, I developed the confidence that I could do it. That year, the SGI-USA had a goal to introduce 3,000 young people to Nichiren Buddhism, and I jumped right in. I had to overcome my doubts about my ability not only to share this practice but to demonstrate actual proof and win over my tendency to blame my circumstances when things did not work out.

For the first time, I introduced someone, my then roommate, to this Buddhism, and I felt the joy of achieving something greater than myself. And doing it with my SGI family—people from all walks of life—made me more openminded and honest.

What did you learn in the process?

Lenny: I saw my tendency to make excuses whenever I left my comfort zone. But my friends in the SGI continued to encourage me to challenge myself to share Buddhism to help others become happy, knowing this would enable me to become happier too. Nichiren Daishonin writes: “When one lights a torch for someone at night, one brings light not only to another person but to oneself as well. … When one gives [someone] strength, one gives oneself strength too.”1

That year, I helped four friends start their practice, and felt a degree of joy I never thought possible. I realized that I could become a person who makes his dreams come true. I glimpsed the kind life I could lead if I stopped making excuses. I saw myself as the owner of my own company, one that exemplified the humanism of Ikeda Sensei’s philosophy.

Why did you decide, in a pandemic, that it was time for such a venture?

Lenny: It sounds risky, and it was. But it’s also a matter of perspective. I was at a crossroads professionally. My work wasn’t motivating, and I had lost my zest for life.

My high school’s film program had familiarized me with video editing software, a skill set I’d used in dozens of situations, each of which I left with a better understanding of how such software could be improved. I was using my time before and after work outlining a service that could scale up into a full-fledged company, but I wasn’t getting anywhere. What’s more, my work performance suffered. Continuing like this would have been a disservice to myself as well as the company.

How did your startup idea come about? 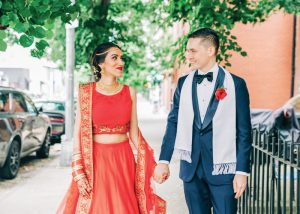 Lenny and his wife, Jihii, at their wedding, May 2019. Photo courtesy of Lenny Bogdonoff.

Lenny: I didn’t have an epiphany; I learned that to develop a service that met the market’s needs, I needed feedback from professionals on the ground. In May 2020, during SGI-USA’s annual May Commemorative Contribution activity, I asked my wife whether she’d be comfortable with me quitting my job to dedicate six months to developing a viable business idea.

The economy was volatile and, given that I wouldn’t be receiving any paychecks, we’d need to take out a loan to fund the endeavor. Despite this, she said, “Yes.” We discussed everything and, in the end, decided that as long as we didn’t compromise our foundation—our shared determination to support kosen-rufu—we could confidently move toward our most ambitious goals. With this spirit, we participated wholeheartedly in the contribution campaign full of appreciation and a determination to financially protect the SGI through our endeavors. Soon after, I left my job.

Lenny: I began working day and night talking to potential customers, programming according to their needs and speaking with experts. By September, though I had only a rough idea of what I was developing, I had secured a stream of large company clients, which made it possible for initial investors to fund its development.

So, they were willing to fund you even though they didn’t know your service?

Lenny: I’ve learned that investors come across many ideas, but in the end, they are looking for people of character. Starting a company is grueling, and it takes a particular kind of person to do it. Grit, open-mindedness and honesty—traits I’d forged in the SGI—are what they look for. You can’t fake them.

People in business whose trust I’d won over the years referred me to various benefactors. One former acquaintance believed in me enough to join me in getting things off the ground. We began to work together, many hours, for days on end. By November, we had ironed out a new editing service to help companies produce targeted video ads and were accepted into a prestigious accelerator for startups, which also invested in us. This was a huge milestone. Over the next three months, we did an all-out sprint toward our fundraising week, at the end of March 2021, when we would pitch the idea to investors all over the world.

That must have been intense.

Lenny: It was. Describing how people do their human revolution, second Soka Gakkai President Josei Toda gives the analogy of potatoes rubbing against each other in a bucket of running water; only by continually doing so do they polish themselves.2 My partner and I were like two potatoes in an InstaPot. The space was small; the hours, brutal. Throughout, we were talking to professionals and potential investors from Asia, Europe and South America, while not sleeping much.

As the technical co-founder, the pressure of building the product while fundraising and selling it built up. Sleep dwindled, and we missed our benchmarks week after week, creating tension within the team. My time to chant also decreased.

What did you do?

Lenny: I sought guidance from a senior in faith and shared my challenges. I was reminded to take my daily practice seriously, and encouraged to deepen my resolve to fight based on a vow to reply to my mentor, rather than solely navigating with my own logic.

This helped me refresh my determination to chant before work every day, even if the previous day had ended at 7 a.m. I also read Nichiren’s writings and Sensei’s encouragement for spiritual nourishment to help me embody compassion as a business partner. This helped me develop and express appreciation for each member of our team, rather than get caught up in my own fear about our benchmarks.

My phone’s background has this guidance from Sensei:

Limitations are of your own making, and only you can break through those walls. Your future victory begins from your deep resolve at this moment. Be a challenger with an invincible spirit!3

You entered the fundraising week united with your team.

Lenny: Yes. Leading up to it, I highlighted this quote from Nichiren:

At the crucial moment, we had no room for error; we had to be in lockstep. Fundraising is challenging over Zoom. The back-to-back interviews were brief—one miscommunication could quickly end the exchange.

We secured enough funding to get ourselves off the ground, but not nearly as much as we had hoped. Still, that May, as the owner of a new, struggling company, my income severely reduced, my wife and I reaffirmed our determination to support the SGI participating once again in the May Contribution activity. Based on a commitment to kosen-rufu, I transformed my inner resolve to win at work. Soon after, the business received a slew of major investments, largely due to referrals from my former colleagues and business partners who trusted me. Suddenly, we had secured more funds than we needed for our four-month sprint.

Incredible! What have you learned from this? 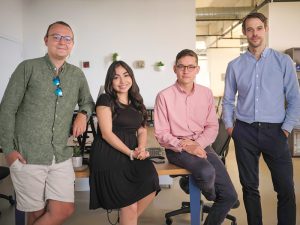 Lenny: Given the company’s small size, I’ve had to wear many hats. So much of what I’m doing is new to me. Still, anything that needs doing, no matter how menial or behind the scenes, I’ll do it. Our success counts on how much I can keep running and create value from what is right in front of me. This has made me humbler—I have a new appreciation for everything that goes into making a business work. This comes with a much deeper appreciation for my co-founder and for each of our employees.

What is your determination moving forward?

Lenny: Tech can be a dog-eat-dog world. What’s worse, the industry itself is very young. I’m often surrounded by other young people who are feeling overwhelmed. I am constantly introducing others to Nam-myoho-renge-kyo, the Buddhability podcast and inviting them to SGI activities.

As for business models, a prevalent one seems to exploit the employee for the benefit of the company. In that model, everyone loses. I’m determined to create a model that focuses on the individual, bringing new people and perspectives into the fold and giving my employees the opportunity to develop their unlimited potential. Every day I rely on my Buddhist practice for the wisdom to do so.

Perspectives on Offerings in Buddhism