I made a determination to throw my entire being into the Soka Gakkai, giving my life to help people overcome their sufferings. It was May 3, 1951, when I made this resolution.[1]—Josei Toda

This is how Josei Toda would later recall the day he became the second president of the Soka Gakkai. His was a fierce struggle to pull people out of the acute illness and poverty that had consumed postwar Japan. The lay Buddhist movement had a membership of roughly 3,000 households at the time, and critics derided it as nothing more than a gathering of the sick and poor.

The young Daisaku Ikeda, indivisible from his mentor’s vow to rid the world of misery, became a trailblazer in propagation efforts, setting into motion a bold struggle to spread broadly the revolutionary ideals of Nichiren Buddhism throughout Japan. By fall 1957, these intense efforts culminated in the Soka Gakkai reaching the seemingly unreachable milestone President Toda had set on the day of his inauguration—a Soka Gakkai 750,000 families strong.

On April 2, 1958, President Toda died peacefully, having accomplished this lifetime goal and having bequeathed the mission and responsibility of accomplishing kosen-rufu to the youth. 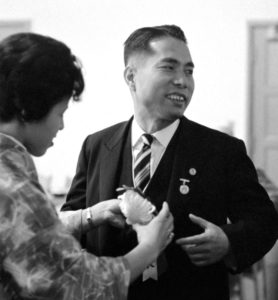 Mrs. Ikeda prepares
Ikeda Sensei for his inauguration as third
“I was raised by Soka Gakkai president, May 3, 1960. Photo by Seikyo Press.

It was in this milieu that the 32-year-old Daisaku assumed the role as third Soka Gakkai president on May 3, 1960. “I was raised by President Toda as his direct disciple,” he wrote in his diary a day after accepting the monumental charge. “He trained me continually and repeatedly. How could I fear any battle?”[3]

At his inauguration, Daisaku gazed at a photo of his late mentor and, with tears welling up, pledged to open the path to worldwide kosen-rufu for the happiness of all humanity.

That defining moment in history came just five months later on Oct. 2, 1960, when he embarked on a global journey to spread Nichiren Buddhism beyond the borders of Japan, starting from the United States. In each of the seven U.S. cities that he visited, Ikeda Sensei established the first districts and appointed the first leaders, providing a framework for the fledgling organization to develop and grow in the earliest days of the kosen-rufu movement in America.

“I was raised by President Toda as his direct disciple. … He trained me continually and repeatedly. How could I fear any battle?”

Sensei, having made the world his stage, created the largest lay Buddhist movement to advance world peace. Now, more than six decades later, over 12 million SGI members in places as diverse as Germany, Brazil, South Africa and Singapore chant Nam-myoho-renge-kyo every day and uphold Nichiren Buddhism—a practice based on the Lotus Sutra’s affirmation of life’s inherent dignity and infinite potential.

Applying the spirit of Buddhist humanism to the universal concerns of peace, culture and education, Sensei has also founded schools and other institutions worldwide as a means for ordinary people to cultivate happy, fulfilled lives as value-creating citizens.

This year, May 3 marks the 20th anniversary of Soka University of America’s establishment. Sensei founded the nonsectarian, four-year liberal arts school in Aliso Viejo, California, in 2001 “to foster a steady stream of global citizens committed to living a contributive life.”

Sensei has written that May 3 marks the New Year’s Day of the Soka Gakkai, when members take a fresh step forward. “This is the hope-filled rhythm of the SGI and one of the important keys of our continued victory,” he writes.[4]

In the same message, Sensei sums up the spirit of Soka Gakkai Day: “The moment and the place where you are right now are what matter. When committed disciples rise into action with a self-reliant spirit, the sure flame of Soka will burn and spread brightly from where they are, from that very moment.”[5]

Updates on SGI-USA Centers and Bookstores