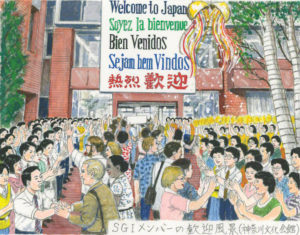 Having become honorary Soka Gakkai president, Shin’ichi Yamamoto dedicated himself to encouraging the members. And to open a path to world peace, he met with many diplomats and leading thinkers from numerous countries.

On August 20, he made his first visit to the Nagano Training Center. While the priesthood prevented him from attending large gatherings, Shin’ichi created a fresh momentum of visiting members at their homes and giving personal guidance, traveling to the nearby cities of Saku and Komoro. He drew on his ingenuity, creating opportunities such as taking group photos, and gave his all to encouraging his fellow members, the children of the Buddha.

In January 1980, members of Shikoku chartered the large passenger ferry Sunflower 7 to travel to Yokohama to visit Shin’ichi at the Kanagawa Culture Center. And in February, young women’s division members from Kyushu’s Amami Oshima Regional Headquarters made their way to the Soka Gakkai Tachikawa Culture Center in Tokyo to meet Shin’ichi. Fierce winds of hardship would in no way sever the bonds of mentor and disciples.

After patiently awaiting the right time and having pierced through the dark clouds of devilish functions, the Soka Gakkai could now fully resume its course in advancing kosen-rufu based on the oneness of mentor and disciple. Shin’ichi now strengthened his resolve to mount a fresh counteroffensive. 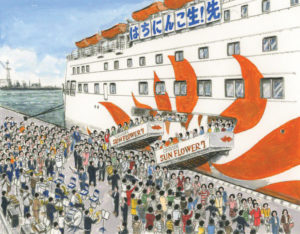 Drawing Forth Wisdom for Overcoming Obstacles

Even after Shin’ichi Yamamoto’s resignation, plots continued behind the scenes aimed at preventing him from giving guidance at large meetings or appearing in the Seikyo Shimbun. Amid this oppressive atmosphere, in January 1980, hundreds of members from Shikoku chartered a large passenger ferry to make the daylong journey to meet Shin’ichi at the Kanagawa Culture Center.

When the ship arrived in the harbor, Shin’ichi said, “Let’s all go out to meet them!” and rushed out of the Kanagawa Center.

The Shikoku members were standing on deck.

A banner reading Welcome to Kanagawa was set up at the pier, where a band comprising Kanagawa members was energetically playing the Shikoku Soka Gakkai song “Our Land.” Shin’ichi, wearing a black coat, stood in front of the musicians and waved to the Shikoku members aboard the ship.

Waving back, the members cried out “Sensei! Sensei!” the voices of some choking with tears of joy and emotion.

“Welcome! I’ve been waiting for you!” Shin’ichi called to them.

The Shikoku members walked down the gangway and were engulfed in the applause of Kanagawa members. …

With a smile, Shin’ichi said: “Are you all feeling well? Thank you for coming. You have triumphed! The 21st century is now in view! You have made a fresh breakthrough for kosen-rufu!”

Committed action opens the door to a new age.

Shin’ichi welcomed the men with a smile, shaking hands, hugging shoulders and offering words of encouragement: “I was waiting for you! I am so happy to see you. Let’s make a fresh start!”

The passionate seeking spirit of the Shikoku members brought him immense joy. As long as they retained that determined commitment, the Soka mentor-disciple spirit to dedicate one’s life to kosen-rufu would live on forever. …

Shin’ichi said to [Seitaro Kumegawa, the Shikoku Region leader]: “Who’d have thought you’d actually come by sea! What an exciting idea! That alone is enough to inspire everyone. In any sphere, it’s important to think creatively. To win in our efforts for kosen-rufu, we need wisdom and resourcefulness.

“All kinds of obstacles will arise on our way to kosen-rufu. But we must press on for our own and others’ happiness and for the sake of peace. If a land route is blocked, for instance, then we’ll quickly have to think of new, alternative ways to proceed, such as going by air or sea, and keep moving forward. We can’t allow ourselves to be defeated.” (The New Human Revolution, vol. 30, pp. 188–89)

Quietly carrying out the tasks we have set for ourselves day after day, never straying from the path of kosen-rufu, moving forward like the sun on its unchanging course in the sky—herein lies true success in life and victory in kosen-rufu. (NHR-30, 116)

Advancing with the resolve to unite and work together for the sake of kosen-rufu, no matter what—forging ahead with faith based on the spirit of many in body, one in mind—that is our unchanging guideline. Indeed, it is the golden rule of the Soka Gakkai. (NHR-30, 165)