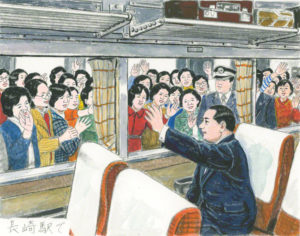 On April 21, 1980, Shin’ichi Yamamoto arrived in China, his fifth visit to the country. After completing his nine-day trip, he flew into Nagasaki in southwest Japan on April 29 to visit the members there. He was determined to launch a fresh struggle to open a new way forward for kosen-rufu.

He traveled on to Fukuoka on April 30 and welcomed Soka Gakkai Day, May 3, in Kansai. He also visited Chubu and Shizuoka, attending numerous gongyo meetings. He had encouraged more than 150,000 members since April 29.

In July, Shin’ichi’s new essay series “Unforgettable Friends in Faith” began in the Seikyo Shimbun. In addition, the serialization of his novel The Human Revolution, which had been on hold for almost two years, also began running in the paper in August.

In late September, Shin’ichi departed for the United States. Traveling to Honolulu, San Francisco, Washington, D.C., and Chicago, he gave his all in encouraging the members. On October 17, the First SGI General Meeting was held in Los Angeles.

In January 1981, Shin’ichi traveled to North, Central and South America. On February 19, he traveled to Panama and, seven days later, arrived in Mexico.

In May, he visited the Soviet Union, Europe and North America. The Soviet Union faced a barrage of worldwide condemnation for its invasion of Afghanistan. Shin’ichi was convinced that it is during such challenging times when the greatest emphasis should be placed on culture and education. Thus, he met with Soviet Premier Nikolai Tikhonov and engaged in dialogue with cultural and educational figures before heading to his next destination, Europe. 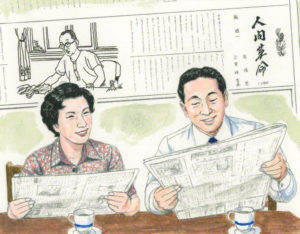 Dictating The Human Revolution With Every Last Ounce of Strength

In August 1980, Shin’ichi resumed the serialization of The Human Revolution with volume 11. He would dictate each installment to an editor, because he was experiencing severe pain in his shoulder and found writing difficult. One day, the editor arrived for a dictation session to find Shin’ichi feverish and lying on the tatami floor with a wet towel on his forehead. Concerned about his condition, the editor sat down and waited until he was ready.

The clock ticked loudly as the time passed. After about 10 minutes, Shin’ichi slapped the tatami with his hand and sat up.

“All right, let’s begin! Let’s leave a chronicle for the future. Everyone is looking forward to reading these installments. Can’t you just picture their happy faces? The thought that it’s all for the sake of the members fills me with energy!”

Reduced-size bound copies of the Seikyo Shimbun from the period described in the chapter, handwritten notes and reference books were scattered around Shin’ichi. He picked up his notes and said to the editor: “Let’s get to work, then! Are you ready?”

Shin’ichi began to dictate. As he went on, his voice grew stronger. The editor wrote frantically but couldn’t keep up with the speed of Shin’ichi’s narration, so he slowed his pace to match the editor’s writing.

After about 15 minutes, Shin’ichi began to cough. Even after his coughing let up, his breathing was rough and labored.

“Let me rest a while,” he said, and he lay down on the tatami again.

After about 10 minutes, when the editor had finished making a clean copy of the dictation he had taken, Shin’ichi’s breathing had become a bit easier. He slapped the tatami again forcefully and sat up.

“OK, let’s continue! Everyone is waiting. Our members are doing their best while enduring much bitterness. Just the thought of it fills me with emotion. That’s why I want to lift their spirits even a little. I want to rouse their courage.”

He began dictating again, but after 10 or 15 minutes, he was forced to take another break.

In this fashion, he composed the manuscript and revised it several times. After he made additional revisions to the galley proof, it was printed in the newspaper. Once the serialization resumed, he wouldn’t be able to stop halfway. That is the arduous nature of composing a serialized novel. For Shin’ichi, it was an all-or-nothing struggle, and he dictated each installment with every last ounce of his strength. (The New Human Revolution, vol. 30, pp. 293–94)

Only by giving our all can we offer encouragement that truly moves others’ hearts. (NHR-30, 277)