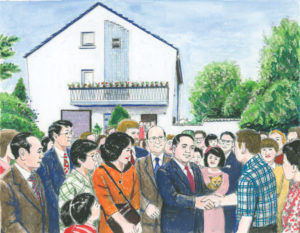 On May 16, 1981, Shin’ichi Yamamoto arrived in West Germany, having departed the Soviet Union earlier that day. Two days later, at the Frankfurt Community Center, he encouraged members at a meeting commemorating the 20th anniversary of kosen-rufu in Germany.

On May 20, he made his first visit to Bulgaria. The next day, the University of Sofia conferred upon him an honorary doctorate in education and sociology, and he delivered a commemorative lecture. On the afternoon of May 23, he attended the “Banner of Peace” Children’s Assembly.

He traveled to Austria on May 25. On his previous visit 20 years earlier, there were no members in the country, but at an informal meeting on May 26, a new headquarters organization was established, with two chapters and a headquarters leader.

Traveling on to Florence, Italy, Shin’ichi congratulated the members on the marvelous growth of the Soka Gakkai in the country, engaging in numerous discussions with the youth who had made this growth possible. He also visited Milan where, on June 3, he met with Superintendent Carlo Maria Badini of the La Scala opera company.

On June 5, Shin’ichi headed for Marseille, France. The next day, he made a short drive to Trets to join a summer training course marking the 20th anniversary of the kosen-rufu movement in Europe.

He then made his way to Paris on June 10. In addition to holding dialogues with officials and leading thinkers, Shin’ichi used every spare moment to talk with and encourage the members. On June 14, as he traveled by subway to the community center to attend a youth conference, he composed a poem for the French youth, dictating stanzas while waiting at station platforms, riding the train and in between transfers. 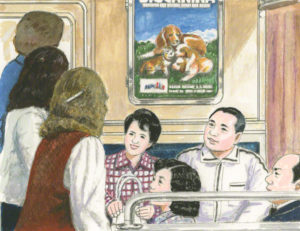 Become a Person Loved by Everyone

In June 1981, while visiting Paris, Shin’ichi used every spare moment, even on the station platform and in the train, composing a poem for the youth attending the First Youth Division Representatives Conference at the Paris Community Center. Then, after encountering some youth members who happened to be on the same train, he encouraged them warmly.

Shin’ichi envisioned the youth striving proudly for kosen-rufu in the new century:

A new world eagerly awaits
your arrival,
each astride a gallant steed,
compassion in your right hand,
philosophy in your left.

Shin’ichi finished the poem soon after they boarded the train. …

Just then, someone called out: “Sensei!”

Three young French people stood before them. It turned out they were on their way to the Paris Community Center from Bretagne, several hundred miles away.

“Thank you for traveling so far. I hope you’re not too tired from your long journey,” Shin’ichi said.

These caring words came from his constant wish to treasure young people.

Youth are hope; they are society’s treasures.

One of the three, a young woman, said to Shin’ichi: “I started practicing a year ago. I’m the only one practicing Nichiren Buddhism in my town, and it takes me several hours to travel to a discussion meeting. I’m worried about whether, under such circumstances, I’ll be able to promote understanding of Buddhism in my community.”

“Don’t worry—your presence alone is enough,” Shin’ichi said without hesitation. “Everything starts with one person. Become someone who is loved by everyone in your community. That’s the key. If there is a single tall tree, people will gather under it to seek shade from the hot sun or shelter from the rain. Similarly, if people like and trust you, a person who practices Nichiren Buddhism, they will naturally come to view Buddhism in a positive light. This will lead to opportunities to share the teachings with them. Focus on growing into a tall tree, a fine tall tree for your community.”

By the time the train arrived at Sceaux Station, the closest station to the community center, Shin’ichi’s poem was complete. He titled it “To My Dear Young French Friends Who Embrace the Mystic Law.” (The New Human Revolution, vol. 30, pp. 404–05)

Our activities as Buddhists begin by shining a light on the individuals who make up each society. (NHR-30, 342)

Excerpts From Nichiren’s Writings in Volume 30