This installment, published in the June 16, 2021, Seikyo Shimbun, focuses on passages from Nichiren Daishonin’s writings that Ikeda Sensei discusses in volume 30 of The New Human Revolution.

“Neither non-Buddhists nor the enemies of Buddhism can destroy the correct teaching of the Thus Come One, but the Buddha’s disciples definitely can. As a sutra says, only worms born of the lion’s body feed on the lion.” (“Letter from Sado,” The Writings of Nichiren Daishonin, vol. 1, p. 302) 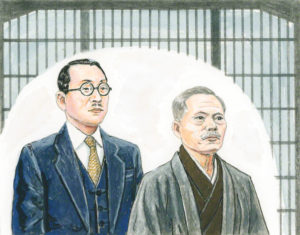 In early 1979, elements within the Nichiren Shoshu priesthood had begun to attack and criticize the Soka Gakkai once again. On April 2 that year, following the 21st anniversary memorial service for Mr. Toda in Shinanomachi, Tokyo, Shin’ichi Yamamoto pondered the problems between the Soka Gakkai and the priesthood.

Shin’ichi sensed that behind the priests’ domineering attitude toward the lay believers lurked a frighteningly treacherous nature.

During World War II, when Japan’s authoritarian rulers increasingly sought to enforce thought control on the population, Nichiren Shoshu agreed to accept the Shinto talisman dedicated to the Sun Goddess. The Soka Gakkai’s first and second presidents, Tsunesaburo Makiguchi and Josei Toda, however, steadfastly upheld the correct teachings and principles of Nichiren Buddhism. As a result, they were jailed by the militarist government, and Makiguchi later died in prison for his beliefs. The priesthood reacted to these developments by taking numerous shameful measures against the Soka Gakkai, such as banning its members from making pilgrimages to the head temple.

Yet despite that history, the Soka Gakkai after the war sincerely did everything it could to support and protect Nichiren Shoshu, believing that doing so was for the good of kosen-rufu.

But the priests, who claimed to be Nichiren’s disciples, harassed and oppressed the Soka Gakkai, which did nothing but selflessly propagate the Law, just as the Daishonin had instructed. This unthinkable state of affairs had persisted from the prewar days.

When viewed in the light of Buddhism, however, the situation becomes absolutely clear. The Daishonin tells us who it is that will destroy Buddhism. …

It is the followers of Buddhism who will destroy it, not non-Buddhists and others who denounce Buddhism. The Lotus Sutra states that “evil demons will take possession of others” (The Lotus Sutra and Its Opening and Closing Sutras, p. 233), describing how the devil king of the sixth heaven[1] will take possession of priests who will then sow confusion and disunity among believers. In this scenario, those wearing priestly robes will trample on the Daishonin’s spirit and obstruct kosen-rufu.

So it was that, during Toda’s lifetime, too, the Soka Gakkai suffered unreasonable attacks from Nichiren Shoshu priests.

Shin’ichi was reminded of a stern warning delivered by his mentor: “Kosen-rufu will never advance without the Soka Gakkai. Those who seek to destroy the Soka Gakkai, a harmonious community of practitioners, are in fact obstructing kosen-rufu!” (The New Human Revolution, vol. 30, pp. 18–19)

“Exert yourself in the two ways of practice and study. Without practice and study, there can be no Buddhism. You must not only persevere yourself; you must also teach others. Both practice and study arise from faith. Teach others to the best of your ability, even if it is only a single sentence or phrase.” (“The True Aspect of All Phenomena,” WND-1, 386)

Practice and Study Are Like the Two Wheels of a Cart

In January 1981, Shin’ichi traveled to Hawaii and spoke at the First International Study Executive Conference attended by representatives from 15 countries and territories, giving guidance based on passages from the writings of Nichiren Daishonin.

[After reading out this passage,] he then went on to explain: “‘Practice’ here means our actions for the happiness of ourselves and others—in other words, chanting Nam-myoho-renge-kyo and sharing it with others. ‘Study’ means learning the teachings and principles of Nichiren Buddhism. Those who exert themselves in both practice and study are genuine disciples of Nichiren Daishonin. Unless we persevere in these two ways, we are not truly practicing Buddhism, the Daishonin says.

“Only the Soka Gakkai has been acting in perfect accord with this passage and advancing kosen-rufu while being subjected to all kinds of opposition and abuse. This is a fact that no one can deny.

“The two ways of practice and study arise from faith. Neglecting practice and study means losing one’s faith. Faith means wholeheartedly embracing the Gohonzon and striving earnestly and steadfastly for kosen-rufu, undefeated by any threat, attack or temptation.

“Practice and study are like the two wheels of a cart, while faith is like the axle. No matter how knowledgeable someone may be about Buddhist doctrine, without practice, they are like a cart with only one wheel and will inevitably veer from the correct path of faith. …

“We are not studying the teachings of Nichiren Buddhism to become professional Buddhist scholars. I wish to reaffirm that the purpose of our Buddhist study is to deepen our faith, attain Buddhahood in this lifetime and advance kosen-rufu.” (NHR-30, 310–11)

The Art of True Relations