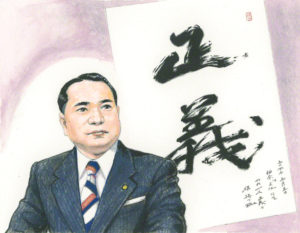 After departing India, Shin’ichi Yamamoto arrived in Hong Kong on February 16, 1979. There, he participated in a conference with Southeast Asia members, a cultural festival and various other events before returning to Japan on February 20.

Then, in early March, a Soka Gakkai vice president made careless remarks directed at the priesthood, creating a perfect opening for Nichiren Shoshu priests to attack the Soka Gakkai. They demanded that, as president, Shin’ichi should assume responsibility for the vice president’s actions.

In a meeting with top Soka Gakkai leaders, Shin’ichi shared his decision to resign from his position as head of all Nichiren Shoshu lay organizations to protect the members. Moreover, he decided to step down as Soka Gakkai president so that he could devote himself to forging new paths for worldwide kosen-rufu.

On April 24, 1979, Shin’ichi’s resignation as president was announced at a prefecture leaders meeting. Later that same day, at a Soka Gakkai Executive Council meeting, he was designated honorary president while Kiyoshi Jujo was appointed the next Soka Gakkai president.

As a result of the maneuverings of some ranking Nichiren Shoshu priests, Shin’ichi was thereafter prevented from speaking at meetings and having his guidance printed in Soka Gakkai periodicals.

The May 3 headquarters general meeting commemorating the completion of the Seven Bells[1] was held under an oppressive atmosphere, with numerous priests in attendance. After the meeting, Shin’ichi encouraged women’s division members who were waiting outside. That day, he took up a large calligraphy brush and wrote the characters for “Great Mountain” before heading to the Kanagawa Culture Center. On May 5, he penned another calligraphy infused with his wish for his successors, writing in bold strokes the word “Justice,” expressing his vow to continue advancing forever on the great path of kosen-rufu. 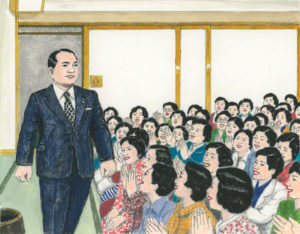 On April 24, 1979, a Soka Gakkai prefecture leaders meeting was held at the Shinjuku Culture Center in Tokyo, where the news of Shin’ichi Yamamoto’s resignation was announced abruptly. The entire room was stunned by what they heard.

The eyes of many of the women’s leaders were red and puffy with tears. Some of the men’s leaders gazed blankly at the ceiling. Some youth leaders bit their lips to control their emotions as they stared ahead with angry eyes.

At that moment, Shin’ichi Yamamoto entered the room.

“Sensei!” the members called out in unison.

Walking to the front of the audience from a side door, Shin’ichi said with energy: “What drama! It makes things interesting, doesn’t it? The struggle for kosen-rufu is always turbulent.” …

Everyone waited in suspense.

“It’s exactly as you have just heard. But you have nothing to worry about. I will continue to strive my hardest in my own capacity. There is no end to the struggle for kosen-rufu. After all, I am a disciple of Josei Toda!”

He was a lion standing dauntless amid raging winds. The pride of Soka mentors and disciples burns brightly in the form of courage.

Shin’ichi said powerfully: “It’s important from now on for you to unite around the new president and work together to build a new Soka Gakkai. I’ll continue watching over you. There’s no need to be sad. This is the start of a great new journey.”

Someone in the room shouted, “Sensei, please don’t step down!”

Some of the members were sobbing, and gradually the sound grew. Some wept openly.

One men’s leader rose and asked, “What will happen to you now?”

“Nothing is going to change with me. I will stay just as I am. Whatever my position, I will simply continue my efforts as a person who is dedicated to fulfilling the mission of a Bodhisattva of the Earth. I am a disciple of Josei Toda, who devoted his life to kosen-rufu.”

A youth division leader asked, as if seeking confirmation, “You will still remain our mentor even after you step down, won’t you?”

“I’ve taught you all the fundamental principles, haven’t I? As youth, you mustn’t let yourselves get emotional over something like this. I want you to declare, ‘It’s a new age! Let’s give it our best!’ and take the lead in encouraging our members. Be fearless!” (The New Human Revolution, vol. 30, pp. 66–68)

The mentor opens the way for the disciples. Genuine disciples widen and extend that path even further. (NHR-30, 63)