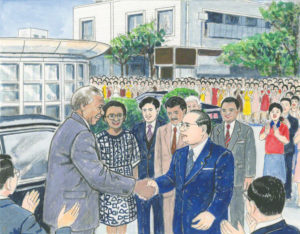 On March 22, 1982, Shin’ichi Yamamoto attended the First Kansai Youth Peace Culture Festival, held at Osaka’s Nagai Stadium. Thereafter, culture festivals were organized in the Chubu region and throughout the country.

In June, the Soka Gakkai mounted the “Nuclear Arms—Threat to Our World” exhibition at the United Nations headquarters and began full-fledged activities for peace. In August 1983, Shin’ichi received the United Nations Peace Medal.

In February 1984, Shin’chi flew to Brazil and attended the Grand Cultural Festival before traveling to Peru. In February 1987 he also visited the Dominican Republic and Panama.

In addition, he engaged in numerous dialogues with leaders of many countries. On his fifth visit to the Soviet Union in July 1990, he met with President Mikhail Gorbachev. That October, he wholeheartedly welcomed Nelson Mandela, leader of South Africa’s anti-apartheid movement and deputy president of the African National Congress, engaging in discussions with him at the Seikyo Shimbun Building in Tokyo.

Shin’ichi penned one poem after another for leading world figures as well as for his fellow SGI members throughout the world.

Amid Shin’ichi’s ardent efforts for peace, Nichiren Shoshu high priest Nikken conspired to destroy the Soka Gakkai and drive a wedge between Shin’ichi and the members. Among the priests’ various claims, they criticized Shin’ichi for proposing that members sing Beethoven’s Symphony No. 9, “Ode to Joy,” asserting that it amounted to praise for the Christian God and violated the Daishonin’s intent. In late December, the priesthood revised its rules and dismissed Shin’ichi as chief representative of all Nichiren Shoshu lay organizations, and they removed other Soka Gakkai leaders from their positions as senior lay representatives.

Moreover, the priesthood attempted to destroy the Soka Gakkai organization by creating a new policy that aimed to coerce members into leaving the organization and joining their local temples. In so doing, the priesthood was engaging in one of the most serious of the five cardinal sins in Buddhism; causing disunity and disorder among the community of believers.

It became very apparent that the priesthood was straying far from the teachings and spirit of Nichiren Daishonin’s Buddhism as they exhibited their deep-rooted contempt for lay believers, as well as their dogmatic and authoritarian tendencies.

On November 28, 1991, the priesthood sent its “Notice of the Excommunication of the Soka Gakkai.” This day has since become the Soka Gakkai’s Day of Spiritual Independence from the priesthood, which degenerated into the “Nikken sect,” a group bent on hindering the progress toward kosen-rufu.

Following this historic moment, in 1992, Shin’ichi set about visiting countries in Asia and Europe. The following year, he traveled throughout the United States and South America, engaging in dialogues with individuals such as Rosa Parks, known as the mother of the American Civil Rights Movement, and Austregesilo de Athayde, former president of the Brazilian Academy of Letters. He also made his first visits to Colombia, Argentina, Paraguay and Chile.

In 1995, Shin’ichi visited Nepal. And, in 1996, he flew to Cuba, where he met and talked with President Fidel Castro, before traveling to Costa Rica, the 54th country that he had visited.

On May 3, 2001, Soka University of America held its eagerly anticipated dedication ceremony.

And on November 18, Shin’ichi attended the headquarters leaders meeting celebrating Soka Gakkai Founding Day and commemorating the 50th anniversary of the young men’s and young women’s divisions. There, he entrusted the youth with kosen-rufu, stating, “I would like you, my young friends of the youth division, to staunchly carry on the solemn spirit of the first three Soka Gakkai presidents” (The New Human Revolution, vol. 30, p. 825).

Having entered the new century, the Soka Gakkai was ringing in the second series of Seven Bells and commencing the grand advance of the Bodhisattvas of the Earth. 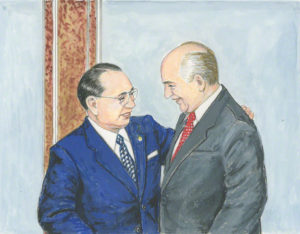 A Resonance of Humanism

In July 1990, during his fifth visit to the Soviet Union, Shin’ichi Yamamoto had his first meeting with President Mikhail Gorbachev at the Kremlin in Moscow. As a desire for world peace resonated powerfully between them, they created a fresh spark of hope for Japan-Soviet relations.

Shin’ichi told [Mikhail] Gorbachev with a touch of humor: “I have come to have an argument with you. Let’s make sparks fly and talk about everything honestly and openly, for the sake of humanity and for the sake of Japan-Soviet relations!”

President Gorbachev responded with humor of his own: “I have heard a great deal about your activities, but I didn’t realize you were so passionate! I, too, like honest and open dialogue. I feel as if we are old friends—people who have known each other a long time and are overjoyed to be meeting today in person for the first time.”

Shin’ichi nodded and said: “I feel the same way. But you are a leader who is the focus of world attention, a statesman of conviction who is fundamentally concerned with peace for all humanity, a leader who possesses charisma and integrity as well as lively passion and intelligence. I am just an ordinary citizen. Today, I would like to become your student and ask your views on a variety of subjects—for the people of the world who are waiting to hear your message, as well as for posterity.”

With the broad smile that he was famous for, Gorbachev said: “You beat me to the punch before I could welcome you properly! You could never be my student. As a champion of humanistic values and ideals, you are making tremendous contributions to humanity. I have profound respect and admiration for you. Your ideals resonate closely with me, and I have a deep interest in the philosophical side of your activities. The ‘new thinking’ that is part of our program of perestroika is like a branch of the tree of your philosophy.”

Shin’ichi shared his thoughts frankly: “I am also a supporter of perestroika and the ‘new thinking’ you seek to foster. They have much in common with my ideas—which is really only to be expected, since both you and I are focused on human beings. All human beings share a common humanity. (NHR-30, 646–47) 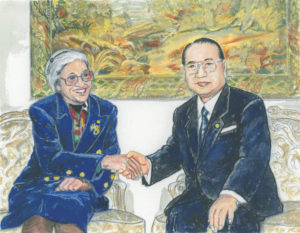 Now Is the Most Important Moment of My Life

Aiming for the 21st century, Shin’ichi Yamamoto dedicated each activity to opening a path for world peace. Toward the end of January 1993, he traveled to countries in North and South America to expand circles of dialogue.

Shin’ichi … met with Rosa Parks, known as the mother of the American Civil Rights Movement, at the Soka University Los Angeles campus.

In 1955, Parks had, through an act of deliberate defiance, protested the discriminatory seating policy of public buses. Her action sparked the famous Montgomery Bus Boycott, which ultimately led to the end of segregation.

Together with a group of young people, Shin’ichi welcomed Parks. In tribute to her selfless human rights struggle, he greeted her with the words “Welcome, treasure of humanity, mother of the world!” During their meeting, Shin’ichi and everyone else celebrated her upcoming eightieth birthday with a cake that his wife, Mineko, had arranged for.

Their conversation reverberated with their shared love for humanity. At one point, Parks mentioned a book titled Talking Pictures that was then being compiled. The idea was to have noted figures select a photograph that had influenced their life most deeply. She shared that she had been asked to contribute to the book and said: “At first, I thought I would select a photograph from the time of the bus boycott, but I changed my mind, realizing that my meeting with you, President Yamamoto, is sure to be the most impactful event of my life. I would like to embark on a journey with you for world peace. If you agree, I would like to include a photograph of our meeting together today as my contribution to the project.”

Shin’ichi Yamamoto was humbled by Rosa Parks’ request. Sometime later, a copy of the published book arrived and, true to her word, it contained a photograph of the two of them shaking hands during their meeting in Los Angeles. In the photo, the mother of the American Civil Rights Movement wore a beautiful, gentle smile.

An accompanying brief commentary by Parks began: “This photograph is about the future, and I can’t think of a more important moment in my life.” She also said that, in spite of different cultural backgrounds, people can come together, and that she regarded her meeting with Shin’ichi as a new opportunity to work for world peace.[1] (NHR-30, 743–45) 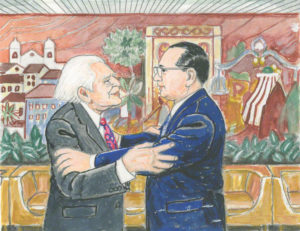 On February 9, 1993, Shin’ichi Yamamoto flew from Colombia to Rio de Janeiro, Brazil, where he was greeted by a leading thinker.

An elderly gentleman had been waiting at Rio de Janeiro International Airport for two hours.

He had a thick mane of white hair, and his face was etched with wrinkles that told of the courageous struggles he had fought. Because of his advanced age, his step was slightly unsteady. But his resolute appearance, belying his ninety-four years, reminded one of a dauntless lion. He was Austregésilo de Athayde, president of the Brazilian Academy of Letters, a leading institution of thought and culture in Latin America and one of the institutions that had extended an invitation to Shin’ichi to visit Brazil. …

He [played] an important role together with human rights champion Eleanor Roosevelt, French Nobel Peace laureate René Cassin and others in drafting the Universal Declaration of Human Rights. …

Athayde learned about Shin’ichi from a friend living in Europe. Through reading Shin’ichi’s writings and speaking with SGI-Brazil members, he developed a strong interest in and sympathy with Shin’ichi’s thoughts and actions, and very much wished to meet him in person.

At the airport, Athayde was eagerly waiting for Shin’ichi’s arrival. Concerned for Athayde’s health, an SGI leader suggested he sit down and rest for a while. But Athayde simply said: “I have waited, and been waiting, for ninety-four years to meet President Yamamoto. Therefore, another hour or two is nothing.”

Shin’ichi Yamamoto arrived at nine o’clock on the evening of February 9. Athayde and those waiting with him greeted Shin’ichi and his party with warm smiles.

Born in 1898, Athayde was a contemporary of Shin’ichi’s mentor Josei Toda, who was born in 1900. Athayde reminded Shin’ichi of Toda, and he felt as if his mentor were standing there welcoming him. …

“You are one of the defining figures of this century, President Yamamoto. Let us work together to change the history of humankind!” …

Shin’ichi responded: “You are my comrade! You are my friend! You are a treasure of the world.”

Walls of discrimination were rising around the world, and human rights were being degraded and violated by authoritarianism, economic power and brute force. To make the spirit of the Universal Declaration of Human Rights a reality, humanity had a long, arduous road ahead. Mr. Athayde was no doubt earnestly seeking people to whom to pass the baton of that undertaking. (NHR-30, 748–50)

The door to a new era is opened by young people. A steady stream of talented young people emerging and fully displaying their potential is essential to the ongoing development of organizations, societies and nations. (NHR-30, 599)

Nothing can give people a more deeply personal appreciation of the terrifying nature of nuclear weapons than hearing the stark firsthand accounts of A-bomb survivors who have lived with its painful aftereffects, or seeing the consequences of the blasts by viewing video footage or artifacts of the aftermath. (NHR-30, 627)

Division begets division, which is why it is so important to establish a unifying philosophy that returns to the universal common
denominator of our shared humanity.
(NHR-30, 662–63)

It is to be expected that all sorts of difficulties and hardships will arise in the process of striving for kosen-rufu. Genuine faith enables us to confront anything that happens without fear or doubt, to deeply perceive the true nature of every painful event with the eyes of faith, and to overcome every hurdle.
(NHR-30, 674)