This installment, published in the July 20, 2021, Seikyo Shimbun, focuses on passages from Nichiren Daishonin’s writings that Ikeda Sensei discusses in volume 30 of The New Human Revolution.

“Without tribulation there would be no votary of the Lotus Sutra.” (“A Ship to Cross the Sea of Suffering,” The Writings of Nichiren Daishonin, vol. 1, p. 33) 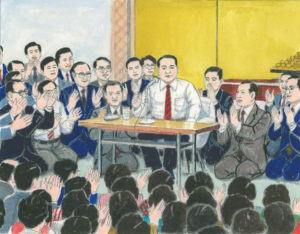 On November 13, 1981, Shin’ichi Yamamoto attends a gongyo meeting commemorating the 25th anniversary of Kochi Chapter. Affirming that great obstacles are inevitable on the path of kosen-rufu, he discussed the proper attitude of faith.

“Times of trouble reveal the essence of a person’s faith. Some may display cowardice and flee or betray their fellow members. Others may decide ‘This is the crucial moment’ and rise up with firm resolve. The difference lies in whether one tries each day to polish and forge one’s faith. We can’t establish strong faith overnight.

“We consistently exert ourselves in Soka Gakkai activities so that we can persevere courageously with unshakable faith in times of adversity.

“We are ordinary people, humble everyday citizens. For this reason, we may be disparaged and persecuted. But because we spread the supreme and unparalleled Mystic Law, we are certain to succeed in advancing kosen-rufu.

“Nichiren Daishonin also states, ‘The Law does not spread by itself: because people propagate it, both the people and the Law are respectworthy’ (Gosho zenshu, p. 856).[1] Accordingly, those who propagate this supreme Law can lead the most wonderful lives possible.

“All of the unfounded attacks and outrageous treatment you’ve had to endure because of your efforts for kosen-rufu and for the Soka Gakkai will become sources of eternal good fortune for you. Don’t be disturbed by people’s trivial words and actions. Rather, live your lives following the unsurpassed way and in perfect accord with the teachings of Buddhism.” (The New Human Revolution, vol. 30, p. 485)

The Nation Exists for the People 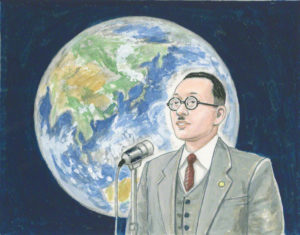 Shin’ichi discusses the rationale behind Josei Toda’s declaration for the abolition of nuclear weapons, and how the human being is more important than the interests of a particular nation.

These words were also included in a UNESCO publication titled Birthright of Man.[2]

Nichiren Daishonin’s message here was that people are not slaves of the state or the social system. No authority can shackle the human spirit. …

Of course, nations and governments play indispensable roles, and it is important that people do their best to contribute to their country, because its condition strongly affects their happiness and well-being.

It is essential to remember that people do not exist for the sake of the nation or a small handful of leaders; the nation exists for the people.

Nichiren Daishonin was dedicated to the happiness of the people who were struggling with hardships and suffering. And he aspired to achieve kosen-rufu not only in Japan but throughout the entire world—that is, to realize happiness and peace for all humankind. When we base ourselves on this spirit, we will quite naturally come to believe in the importance of living together in harmony with all people and working for the common good of humanity.

In February 1952, during a time of intensifying East-West tensions in a world split by the United States and Soviet Union, second Soka Gakkai President Josei Toda advocated the concept of a global human family. This, too, was an expression of the ideals of Nichiren Buddhism.

As practitioners of Nichiren Buddhism, Soka Gakkai members embrace a life philosophy that views everyone as precious, equal and deserving of happiness. When they see others suffering, they empathize and compassionately encourage them out of a wish that they become happy. Broadening understanding and support for this way of thinking and living is the key to building a solid grassroots movement for peace that can unite people around the world. (NHR-30, 633–34)

The Wisdom for Creating Happiness and Peace