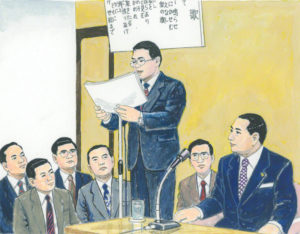 To mark the 30th anniversary of the establishment of the youth division in July 1981, Shin’ichi Yamamoto sent via telegram a congratulatory message in the form of a poem. He also poured his energies into nurturing youth who would shoulder the new era. On July 18, following the unexpected death of fourth Soka Gakkai President Kiyoshi Jujo, Eisuke Akizuki became the fifth Soka Gakkai president.

In November, Shin’ichi traveled to Shikoku where at a leader’s meeting commemorating November 10, Kagawa Day, he declared: “I will take the lead once again!” (The New Human Revolution, vol. 30, p. 477). The counteroffensive had begun in earnest.

Also, at the request of the Shikoku young men’s division members, Shin’ichi worked with them on over 20 revisions of their song. On November 14, the “Song of Crimson” was completed.

On December 8, Shin’ichi began his guidance trip in Kyushu’s Oita Prefecture. After visiting the city of Beppu, an epicenter of conflict with the Nichiren Shoshu priests, he arrived at the Oita Peace Center.

On December 10, he poured his entire being into finalizing the poem “Youth, Scale the Mountain of Kosen-rufu of the 21st Century” so that it could be presented at that evening’s Oita Prefecture Youth Division Leaders Meeting. He continued revising it until just before the meeting began. The guiding principles for the 21st century were transmitted from Oita across the nation.

Shin’ichi visited the city of Taketa in Oita where members had suffered greatly during troubles with the priesthood. He joined a large group of members who had gathered at the Oka Castle ruins and took photos with them and sang with them “Moon Over the Ruined Castle.”

Thereafter, he traveled to Kumamoto Prefecture, where he visited the Soka Gakkai Shiragiku Auditorium in Asomachi. On December 15, after attending a meeting at the Kumamoto Culture Center, Shin’ichi took commemorative photographs with participants at a nearby park.

On January 10, 1982, he flew to the northern city of Akita, where members had been relentlessly attacked and harassed by priests. He attended meetings at the Akita Culture Center and, amid falling snow, took commemorative photos with the participants at an adjacent park as everyone energetically sang the “Song of Human Revolution” together. Cheers of victory resounded as if declaring the people’s victory.

Song of the People’s Victory

On January 13, 1982, while visiting Akita Prefecture, Shin’ichi Yamamoto attended a commemorative photo session in the falling snow at a park in front of the Akita Culture Center. In recent years, the Akita members had endured persecution by elements in the priesthood.

Anti–Soka Gakkai priests regularly demanded members quit the Soka Gakkai in exchange for conducting funeral services. Some priests delivered long, rambling tirades against the Soka Gakkai at funerals, which relatives and friends who were not members also attended. On top of that, some priests coldly asserted that the deceased had not attained Buddhahood. It was cruel and despicable, utterly inhuman.

Having endured and rebuffed such pressure, the members now set forth on a new journey toward the 21st century with Shin’ichi. Their hearts brimmed with the joy that spring had come at last.

As the snow fell, Shin’ichi arrived wearing a white parka. It was 28 degrees Fahrenheit. The crowd of some 1,500 members cheered and applauded.

Shin’ichi stepped onto a riser and took up the microphone.

“Thank you for gathering here despite the snow!”

“Your strength and energy epitomize the spirit of ‘pressing on through blizzards, we boldly advance,’ as the ‘Song of Human Revolution’ goes. Let’s sing it today as a declaration of Akita’s great victory!” …

Take your stand, and I will take mine too,
each in our own realm of kosen-rufu, standing up alone …

Shin’ichi sang along as a fighting spirit blazed in everyone’s heart. It was a proud victory song of Soka mentor and disciples.

Shin’ichi made another suggestion to the members who had fought so hard: “Let’s give a victory cheer to celebrate your brave struggle and great triumph!”

The members roared in approval.

A series of cheers resounded across the snowy landscape, a powerful declaration of the people’s victory.

They pumped the air with their fists and raised their voices, expressing the joy of victory with their entire beings.

The falling snow was like a whirling shower of blossoms, as if the heavenly deities were joining them in celebration. (NHR-30, 577–79)

Being an onlooker or a critic rather than someone who takes personal initiative to support and protect the Soka Gakkai is a mark of cowardice. Being a slave to others’ opinions leaves one easily shaken and prone to badmouthing the organization. (NHR-30, 574)