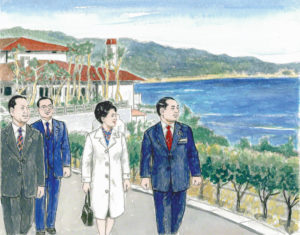 On November 18, 1978, Shin’ichi Yamamoto spoke at the headquarters leaders meeting marking the 48th anniversary of the Soka Gakkai’s founding. Mentioning that the first series of Seven Bells would conclude the following year, he discussed his outlook on the future.

The following day, he issued a proposal in which he discussed themes such as environmental issues and the Soka Gakkai’s role in meeting the needs of local communities.

Shin’ichi visited the Totsuka Culture Center in Kanagawa prefecture on November 21. And the next day, a song that he had composed for the members of Gunma prefecture was announced.

On November 23, he attended the first Kanto region chapter leaders meeting, where he spoke on leadership. He also presented the members of Shizuoka prefecture with a song that he had written amid his busy schedule.

Arriving in Osaka on November 29, he traveled to Mie prefecture the next day, making his first visit on December 1 to Nabari City, where he encouraged members, including the men’s division region leader and his family.

Returning to Osaka, Shin’ichi departed on a guidance trip to Kochi prefecture, visiting for the first time the Kochi Training Center with its expansive view of the Pacific Ocean. He poured his life into encouraging the members each day.

From there, he traveled to the Shikoku Training Center in Kagawa prefecture. On December 12, at the Tokushima Prefecture Leaders Meeting, he stressed the importance of upholding resolute faith.

From December 26 to 28, Shin’ichi visited Tochigi and Gunma prefectures. He continued sprinting forward, telling himself: If I don’t act now, when will I? The time is now! This is my golden opportunity! 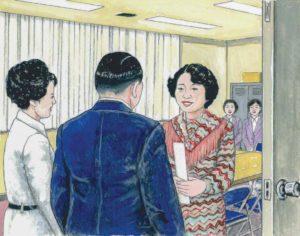 In December, Shin’ichi traveled to Kochi prefecture in the Shikoku region for a guidance tour, meeting with as many members as he could until the last moment of his stay.

[On the final day of his trip,] a gongyo session commemorating the first anniversary of the opening of the Kochi Culture Center was held at 11:30 a.m. Although it was arranged as a local meeting for those living close to the center, word traveled throughout the prefecture that anyone who could attend was invited. As such, members filled the center’s main meeting room, and one by one, all the other rooms began to overflow with participants. …

Before leaving the center, Shin’ichi went to the first floor and peeked into the room where the meetings were being organized. A young women’s division member who had been accompanying the chorus on piano during the meetings came up to him: “Sensei, my name is Mitsuko Hirao. As a member of the chorus, I’ve been able to attend all the gongyo sessions you’ve held here in Kochi.

“My father is the only one in our family who isn’t a member, but I’ve been sharing my excitement with him every day, telling him about your activities. He has been listening intently and sharing in my joy. In fact, he even composed these poems for me.”

She held out a card on which two poems were written:

A temperament
as heartening as the sun
on a winter’s day.

Your each and every word
warms my heart.

With a smile, Shin’ichi told her: “You have a wonderful father. I can tell that he really loves you. His poems convey a genuine sense of joy in seeing you become someone who illuminates her surroundings like the winter sun, someone who is loved by all. Through you, he has been able to get to know me and understand our movement.

“Your sincere behavior as a daughter has deeply moved your father. That is a great victory. If I may, I’d like to compose a poem for him. … Please tell him that I will send him one very soon.”

About a week later, Shin’ichi sent a copy of his dialogue with Arnold Toynbee to Mitsuko, addressed to her father. In it was a poem:

I pray every day
with gratitude to a father
and for a daughter’s happiness.

Soon after, Mitsuko’s father decided to join the Soka Gakkai. He became a reliable men’s division member, protecting the organization and making the family’s home available for Soka Gakkai activities.

The crucial means to perpetuate and further develop any organization is to ensure the transmission of its fundamental principles and spirit. In addition, continually manifesting the wisdom required to meet the needs of the time will allow it to flourish eternally.