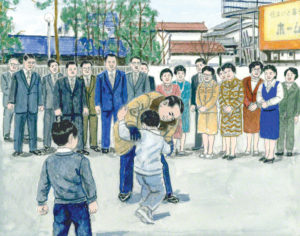 In early 1979, Shin’ichi traveled to Tohoku on a guidance trip. Attending a January 12 meeting to commemorate the opening of Mizusawa Culture Center in Iwate prefecture, he encouraged everyone to become pillars of society.

Many attending this 1979 meeting went on many years later to play key roles in helping fellow community members in 2011 after the devastating Tohoku earthquake and tsunami.

Until his departure from Tohoku, he spent as much time as he could with the members, even sumo wrestling with children in the center’s garden.

On January 14, Shin’ichi welcomed to the Aomori Culture Center former junior high school division members from the Shimokita peninsula, who had promised 10 years earlier to meet again at this time. He also participated in a leaders meeting and numerous representatives’ meetings.

To mark the annual Coming of Age Day, celebrated by those turning 20, Shin’ichi took commemorative photographs with these youth, as well as with the youth event staff. Everyone brimmed with fresh vigor. He also toured the neighborhood surrounding the center and encouraged members that he encountered along the way.

Upon his return to Tokyo, Shin’ichi engaged in discussions on January 20 with Bryan Wilson, professor of sociology at the University of Oxford. They subsequently published a book of their dialogues, titled Human Values in a Changing World.

In thinking of his upcoming trip to India, Shin’ichi chose to depart for India from Kyushu. This was because second Soka Gakkai President Josei Toda was traveling through Kyushu in 1957 when he entrusted the youth with accomplishing kosen-rufu in Asia. At the February 1 commemorative leaders meeting held at the Kyushu Training Center, watching a passionate performance of the national anthem of India, Shin’ichi refreshed his resolve to work for global kosen-rufu. 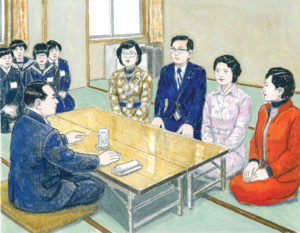 Victors Are Those Who Fulfill Their Vow

In January 1979, Shin’ichi met with members who had traveled from the Shimokita peninsula to visit him at the Aomori Culture Center. They had corresponded with Shin’ichi as junior high school students years before.

One spring, 10 years earlier, Shin’ichi had received a parcel from members in Ominato on the Shimokita peninsula. It contained a group photograph of some 30 or 40 students who had attended a junior high school division meeting there and a letter written by the group’s representative expressing their dreams and aspirations.

He was delighted to learn that junior high school members on the northernmost point of Japan’s main island held such passionate goals and hopes for the future, and were joyfully practicing Buddhism. He immediately sent them a copy of the second volume of the book A Youthful Diary, which was not yet for sale, inscribed with the message: “I am always praying for the growth and success of Shimokita junior high school members. My comrades who are pictured in this photograph, let us meet 10 years from now—it’s a promise!” …

[Now, 10 years later,] Shin’ichi eagerly welcomed those former students. … “Thank you for coming all this way! I’m sure you all pledged to the Gohonzon to greet this day having achieved greater growth as a person. And having never forgotten that vow, you continued to challenge yourselves. That’s the important thing.

“You must not break the promises you make before the Gohonzon. It’s easy to make determinations, but they have no meaning unless you take action to realize them. Fulfilling the vow you have made is a noble and worthy endeavor. It is guaranteed to lead you to victory in life.”

Over the years, the members had in fact gotten together on a number of occasions to reaffirm the pledges they had made, encouraging and inspiring one another to keep going.

Among the group was a young man named Masashi Kimori. … He was a sophomore in high school when Soka University first opened its doors, and he held strong aspirations to study at this institution founded by President Yamamoto. He knew it was beyond his family’s means to send him there, but he was determined to go and pleaded with his parents until they gave their approval. Pouring himself into his studies, he was able to gain admission to Soka University a year after finishing high school, becoming the first to enroll from his hometown of Shimokita.

He moved to Tokyo, sharing a cramped apartment with his brother who was working there, and took up construction jobs and other part-time work to pay his way through college. Aiming toward that day “10 years from now” when he would meet with Shin’ichi, he gritted his teeth and kept on striving.

Victors are those who triumph over their weaknesses and limitations with patience and perseverance. They are individuals who fulfill their vow.

When we only see the difficulties lying ahead, we tend to be prepared to content ourselves with our present circumstances. That is a sign we have been defeated by the devilish functions within our lives before even putting up a fight.

Make a firm resolve, pray and take action—practice this with perseverance and joy. It may appear to be simple, but this is the unchanging formula for victory in both activities and in life.