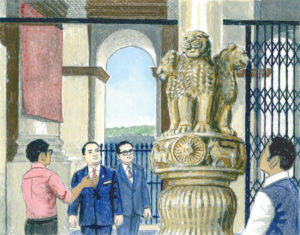 Shin’ichi Yamamoto arrived in Hong Kong on February 3, 1979. The next day he made his first visit to the Kowloon Community Center where he attended a meeting commemorating the 18th anniversary of kosen-rufu activities in the territory.

After midnight on February 6, he arrived in New Delhi, India. Later that afternoon, he attended a book donation ceremony at the University of Delhi.

Approximately 40 members had gathered from throughout India. In encouraging them, Shin’ichi said that just like the waters that form the Ganges River, they each represent single drops of water at the source of the great river of kosen-rufu in India. On February 9, Shin’ichi formed a friendship with Kocheril Raman Narayanan, the vice chancellor of Jawaharlal Nehru University.

Arriving in Patna on February 11, Josei Toda’s birthday, Shin’ichi stood that evening on the banks of the Ganges River, remembering his mentor and his earnest wish to realize kosen-rufu in Asia.

Visiting Calcutta (present-day Kolkata) the next day, he led a book presentation ceremony at Rabindra Bharati University, named in honor of the Indian poet Rabindranath Tagore. And at the Indian Museum, Shin’ichi pondered the historical development and decline of Buddhism in the country. 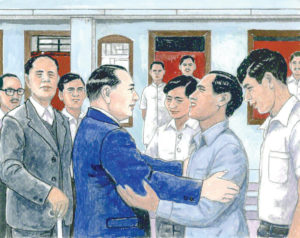 Noble Is the Life That Knows Great Hardship

During his trip to India in February 1979, Shin’ichi and his team visited schools on the outskirts of Calcutta (present-day Kolkata).

Shin’ichi’s group also visited the Ramakrishna Mission Blind Boys’ Academy, part of the Rama-krishna Mission Vidyalaya school. The principal, who was himself blind, smiled warmly as he shook hands with Shin’ichi and guided them to the technical training facilities where students were engaged in assembling nuts and bolts.

As he watched, Shin’ichi spoke to the students: “The act of challenging yourselves is itself an incredible achievement. By acquiring certain skills and taking an active part in society, you can serve as a beacon of hope for so many others with visual impairments.”

As the visit came to a close, a number of student representatives joined the principal and teachers in sending Shin’ichi and his team off. Embracing one of the students, Shin’ichi said: “Living with a visual impairment, you may face more obstacles and have to exert yourselves harder than others. But that’s precisely what makes your lives most noble. I hope you will lift your head with pride as you lead the greatest of lives.

“All people are equal. Everyone is battling some kind of trial or hardship. What matters is how you create your own hope and continue to live boldly to the very end. Those who can do this are true victors in life. …

“Never be defeated. You must win in life. Losing to oneself is the cause of unhappiness. I will be praying for your victory.” Shin’ichi wanted to ignite a brilliant flame of courage in the boys’ hearts.

Then, firmly shaking the principal’s hand, he passionately said: “These young people are treasures of the world. They are India’s stars of hope. Please nurture them into individuals who will bear crowns of triumph in life and send them out into the world.”

“Please come again!” There were tears in the students’ eyes as they vigorously waved goodbye.

Both in a material and spiritual sense, it is the responsibility and duty of adults to protect and nurture children.

Excerpts From Nichiren’s Writings in Volume 29