This installment, published in the May 19, 2021, Seikyo Shimbun, focuses on passages from Nichiren Daishonin’s writings that Ikeda Sensei discusses in volume 29 of The New Human Revolution. The official English translation of volume 29 will be published at a later date. As such, these excerpts are subject to later revisions.

“Always remember that believers in the Lotus Sutra should absolutely be the last to abuse one another. All those who keep faith in the Lotus Sutra are most certainly Buddhas, and one who slanders a Buddha commits a grave offense.” (“The Fourteen Slanders,” The Writings of Nichiren Daishonin, vol. 1, p. 756)

Creating Unity and Supporting Our Leaders 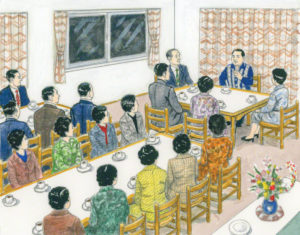 In December 1978, Shin’ichi Yamamoto visited Nabari, Mie prefecture. At a joint meeting for local representatives as well as area and prefectural leaders, he warned against harboring feelings of resentment and jealousy toward fellow members.

“Soka Gakkai leaders should excel in their personal character, discernment and leadership ability, and should aim to become individuals who are respected and trusted by all, which will naturally require conscious effort. However, we are all ordinary human beings in the midst of our own human revolution; there will be those who lack politeness in their way of speaking or leaders that fail to show sufficient consideration for others. There may even be instances in which a leader upsets their fellow members. But if people harbor grudges or resentment as a result of this, that in itself becomes a form of slander. …

“When a leader’s shortcomings become a hindrance to members’ unity and cause activities to stagnate, it is important to think about what you can do to improve the situation. Don’t just shrug it off as ‘someone else’s problem’; rather than criticize the leader, offer them your support. That’s the proper behavior of a Buddhist practitioner who seeks the Law within.

“Since we are imperfect human beings advancing kosen-rufu in this corrupt and defiled Latter Day of the Law, there will no doubt be times when differences of opinion will give rise to emotional conflicts. However, we can carry out our human revolution precisely because we are faced with the turmoil and difficulties of living among many different people. I hope you will regard your problems in relationships with others as opportunities for growth and chant earnestly, transforming everything into fuel for advancement. Whatever happens, please persevere with pure and powerful faith, like a waterfall.” (Tentative translation from the “Sprinting Forward” chapter)

“Because I have expounded this teaching, I have been exiled and almost killed. As the saying goes, ‘Good advice grates on the ear.’ But still I am not discouraged.” (“The Essentials for Attaining Buddhahood,” WND-1, 748)

“Still I Am Not Discouraged” 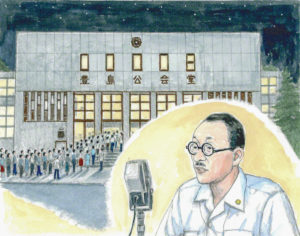 On January 19, 1979, a headquarters leaders meeting was held at the Kawasaki Culture Center in Kanagawa prefecture. In his speech, Shin’ichi Yamamoto spoke about his mentor, second Soka Gakkai President Josei Toda.

“I recall Mr. Toda’s guidance every day and have continued an inner dialogue with him while taking the lead for kosen-rufu.

“I am sure you are aware of the famous series of lectures on the writings of Nichiren Daishonin that Mr. Toda gave at the Toshima Civic Hall.[1] …

“Mr. Toda continued: ‘We have the tremendous good fortune to be the children of the Buddha of the Latter Day of the Law, Nichiren Daishonin. We are Bodhisattvas of the Earth. This passage from Nichiren represents the very spirit of the Soka Gakkai. However incompetent I may be, ‘still I am not discouraged’ in my efforts for kosen-rufu. We must be prepared to encounter a series of great persecutions, because we are dedicated to fulfilling the will of the Daishonin. We must have courage and perseverance.’”

Shin’ichi reflected: “His words are still clearly engraved in my heart to this day.

“Life is filled with difficulties, large and small. In particular, having dedicated our lives to the great vow for kosen-rufu, we can never know what persecutions await us. Unexpected, arduous trials are a matter of course. But in the spirit of ‘still I am not discouraged,’ let us continue to advance courageously along our chosen path of mission.

“This has been my personal determination. I hope that you, my beloved fellow members, will strive to the end with these golden words as your lifelong guide.” (Tentative translation from the “Fresh Vigor” chapter)

Reflections on the Global Civilization