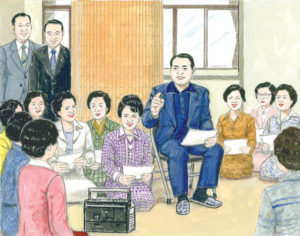 On October 10, 1978, Shin’ichi Yamamoto met John Kenneth Galbraith, an economist and professor emeritus at Harvard University. The two formed a friendship at this meeting through their frank exchange of ideas.

The next day, Shin’ichi traveled to Osaka’s Joto Ward to attend a meeting commemorating the 700th anniversary of the Atsuhara Persecution, in which Nichiren’s followers maintained their faith at the cost of their lives. Shin’ichi clarified how the spirit of these martyrs applies to us today.

At the headquarters leaders meeting held on October 21 at the Itabashi Culture Center in Tokyo, Shin’ichi introduced a number of songs that he composed, including the new women’s division song, “Mother,” and another one for members of Ibaraki prefecture. After the meeting, he listened to a recording of “Mother” with women’s division representatives.

In the days that followed, he created and wrote song after song for members in Saitama, Niigata and Tochigi prefectures, as well as in Setagaya Ward in Tokyo.

Meanwhile, due to the scheming attorney Tomomasa Yamawaki, the priesthood had stepped up its attacks on the Soka Gakkai. Shin’ichi continued encouraging the members with all his might, composing songs for the guidance division and members in Yamanashi prefecture.

On November 11, Shin’ichi visited the Senshu Culture Center in Osaka and admired chrysanthemums cultivated by the local members. The next day, he shared with the Senshu members a poem he had composed for them. 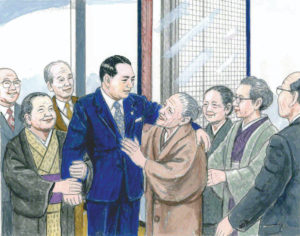 Humanism Is Found in Considerate Action

During a trip to the Kansai Region in November 1978, Shin’ichi Yamamoto visited the newly completed Senshu Culture Center in Izumisano, where he was greeted by cascades of chrysanthemums in full bloom. To express his appreciation to the local members who had cultivated these flowers, he arranged an additional gongyo session so they could participate.

Those attending this gongyo session were volunteers from each block who had painstakingly grown the chrysanthemums that now adorned the Senshu Culture Center.

Upon seeing their gorgeous blooms two days earlier, Shin’ichi had asked one of the Kansai leaders whether the members who had cultivated them would be attending any of the sessions. When he learned that they had not been invited, he proposed that an extra session be held so that they too could participate. “I’m happy to attend as many sessions as needed,” he said. “The spirit of the Soka Gakkai is to especially cherish those who are working hard and making sincere efforts behind the scenes. I would like to meet them in person and thank them with all my heart.”

Arrangements were soon made for a session accommodating these members to be held during the afternoon of November 12.

The light of humanism shines in steps taken out of care and consideration for others. … During the session, Shin’ichi expressed his gratitude by presenting the members with a number of poems of praise and encouragement:

Just as the moon graces the heavens,
these fragrant chrysanthemums grace the Earth,
sure proof of kosen-rufu.

Having worked to grow these chrysanthemums,
from the shadows I now weep tears of joy
to see the happiness they bring.

Such a breathtaking sight!
This garden of chrysanthemums,
a masterpiece of ethereal beauty.

Looking upon these chrysanthemums,
it is as if I can see
your hearts of deep faith.

Fields of billowing chrysanthemums!
Eagle Peak
must be like this, too.

Then, soon after his concluding remarks, he headed to the corner of the hall where a group of elderly women were seated. These must be the pioneer members who gave their all to opening the path for our movement since the early days, he thought, turning his mind to the tremendous struggles and hard-fought glory of all those who have weathered the arduous journey of advancing kosen-rufu. Approaching them as though he were greeting the Buddha, he placed his hand on one of their shoulders and said: “Thank you for coming today. It’s an honor to meet such incredible women. Thank you for all of your efforts throughout the years. I can’t help but regard you as I would my own mother. Please live long! I wish for this with all my heart.”

What is the most compelling actual proof of our faith in old age? It is not wealth, social position or public acclaim, but the brilliance of our character that shines with humanism, just as we are.