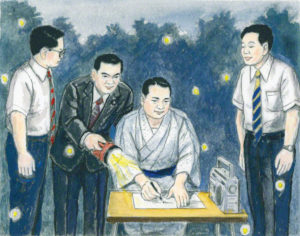 The student division song “Onward to Kosen-rufu” debuted at a leader’s meeting commemorating the founding of the division. The song’s popularity spread, and members around the country soon began singing it at meetings.

Shin’ichi continued creating songs into July. He wrote new songs for the young men’s division, the Byakuren,[1] the men’s division and for members in the Kitamachi area of Tokyo’s Nerima Ward.

Commemorating July 17, the Day of Osaka, Shin’ichi wrote “Ever-Victorious Skies” for the members in Kansai with whom he had shared many struggles and joys. He also worked on the lyrics to a song for members in Chiba.

Following his visit to Kansai, Shin’ichi began a guidance trip in the Chugoku region. During car rides from one destination to another and in between meetings, he continued writing and polishing song lyrics. While in Okayama Prefecture, he composed a song for members in Kyushu. 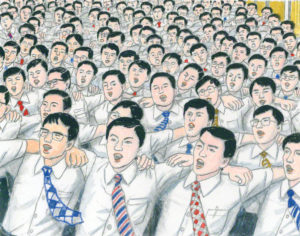 Together, Let’s Dash Onward to Kosen-rufu

In June 1978, Shin’ichi Yamamoto composed the music and lyrics for a new student division song, titled “Onward to Kosen-rufu.” The song was announced at a leaders meeting commemorating the 21st anniversary of the student division held on June 30 at the Arakawa Culture Center in Tokyo. Shin’ichi passionately shared his hopes and expectations for the growth of the student members.

Shin’ichi wanted every member of the student division to become a victor in life. …

“Life is a never-ending struggle against adversity. We will always be faced with hardships. What matters is whether we triumph over them or are defeated by them. Happiness is only found in becoming a person who is never defeated by anything.

“No matter how harsh or unremitting the circumstances may be, continue chanting Nam-myoho-renge-kyo and press ahead until you break through. Therein lies the key to finding true fulfillment, enjoyment and happiness in life. That’s the true power of this Buddhism. …

“As individuals with the mission of becoming great leaders of the 21st century, please reach out to each of your friends who may be struggling, thoroughly encourage them and share your Buddhist practice with them. In doing so, you can cultivate genuine leadership ability, strong human qualities and deep conviction in the power of Buddhism, inspiring all those around you.

“With the highest of hopes, Mr. Toda always told the youth that he entrusted the future of the Soka Gakkai to them. I have always striven to live up to his expectations.

“Now it is your turn. With my whole heart, I entrust the 21st century to you.” …

Then the choral group performed “Onward to Kosen-rufu.” …

Standing upon the broad and open plains,
we embark on a journey of a thousand leagues
majestically astride white steeds.

The audience then joined with the chorus to sing with youthful passion. Linking arms, they swayed left and right, like a great wave surging toward a new age. Shin’ichi looked intently at each person, as if to burn the image of their faces into his memory, while enthusiastically clapping in time to the music.

As they sang, the students vowed: “I will boldly stand upon the broad and open plains of my mission!” “I will be a champion of the 21st century and take my place on the stage of the new era!” “I will be a student of compassion and philosophy, shining with wisdom and intellect that drive progress and renewal!” “I will engage in dialogue for the sake of justice and strive to create a history of lasting peace for humankind!”

New songs have the power to inspire a new generation and unleash a new age.

For the further expansion and development of Buddhism, it is essential that, while responding to the times, we take into account contemporary ideas in philosophy and science, so that we can talk about Buddhism in a way that is easy to understand for people today.