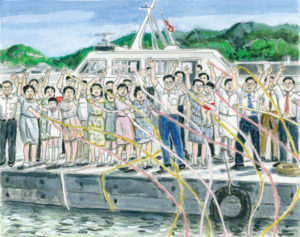 At a commemorative leaders meeting at the Shikoku Training Center on July 25, 1978, Shin’ichi Yamamoto spoke about the essence of the Soka philosophy of humanism explaining that ordinary people inherently possess the Buddha nature. He expressed his great hope that many capable people emerge from the Shikoku region.

The next day, he made his second visit to the island of Shodoshima, where he encouraged local pioneers as well as members who had to endure heavy rains and flooding. He later presented them with a song he composed.

On July 27, participants at a leader’s meeting commemorating the Day of Chubu energetically sang a song Shin’ichi had composed for them. He said that true fulfillment and joy of faith is found in fulfilling our vow for kosen-rufu.

The next day, he attended five gongyo meetings in Tono, Gifu Prefecture, pouring his life into encouraging the members.

On August 2, a song that Shinichi had created for the members of Tokyo was introduced at a chapter leader’s meeting. In discussions with representatives after the meeting, he encouraged the leaders to be united as “One Tokyo.”

Despite his demanding schedule during his Kyushu guidance trip, which began on August 9, Shin’ichi continued writing one song after another. He wrote one for Hokkaido members and, while visiting Nagano Prefecture on August 22, he composed “Song of Shinano.”

Shin’ichi continued creating these songs of hope and courage to inspire members throughout the country to dedicate their lives to kosen-rufu. 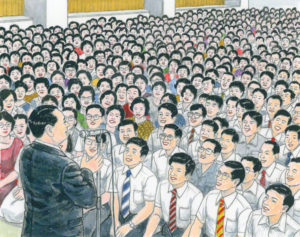 Giving Our All to Each Encounter

In July 1978, Shin’ichi traveled from Aichi Prefecture to Tono in Gifu Prefecture, part of Chubu Region. There, he held multiple gongyo sessions at the Tono Culture Center to encourage the local members who were making great efforts even as they faced challenging circumstances, including incurring attacks by a group of Nichiren Shoshu priests.

Following the conclusion of the second gongyo meeting, Shin’ichi peered out the window. A continuous flow of people were walking along the raised embankment of the Toki River, heading to the culture center. He said to one of the Chubu leaders: “Let’s hold a third gongyo session. I want to meet and encourage everyone who comes to the center. We’ll hold as many sessions as needed.”

Turning to the Seikyo Shimbun reporter accompanying him, he said: “Can you publish the photographs of all the gongyo meetings in tomorrow’s paper? I want to bring joy to the Tono members. Please work out the necessary arrangements.”

Shin’ichi then opened his copy of Nichiren Daishonin’s writings and poured over it as he prepared his remarks for the next session.

Success in all things is a result of devoting all our energy to careful preparations. Shin’ichi was not in the best of health during his visit to Chugoku, Shikoku and now Chubu. He had been running frequent fevers, and the extremely hot weather was taking its toll on his energy levels. … But when he considered that this may be a once-in-a-lifetime opportunity to meet with these individuals, he couldn’t help but throw his entire being into each gongyo meeting. …

The fourth session started at 7:45 p.m. After playing the piano to uplift the participants, he lectured on Nichiren’s writing “The Meaning of Faith.” …

The gongyo session ended at 8:15 p.m. People who hadn’t been able to fit into the room were still waiting outside. They quickly entered and took the places of those who got up to leave. The fifth session began. It was already 8:45 p.m. …

“Faith ultimately means to be without doubt,” Shin’ichi explained. … “Striving for kosen-rufu entails a struggle against devilish functions,” he continued. “This may be in the form of persecution by the authorities, unexpected occurrences or events that stir up doubt. That’s why I hope that no matter what happens, you will engrave the word ‘faith’ deeply in your hearts, advance along the great path of kosen-rufu and become happy without fail.” …

Shin’ichi poured his life into offering this guidance that was imbued with his deepest conviction.

Tokyo, the capital of Japan, is the key bastion where the Soka Gakkai Headquarters is located. Tokyo will play a decisive role in the victory of kosen-rufu and the future of theSoka Gakkai.

Those who put chanting daimoku first are unshakable. They are fearless. They never retreat and cannot be defeated. That is because an indomitable fighting spirit and joy burn brightly in their hearts.