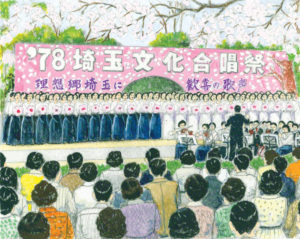 In 1978, many young Nichiren Shoshu priests intensified their attacks on the Soka Gakkai and its members.

With the start of the Soka Gakkai’s second phase of worldwide kosen-rufu in 1972, Shin’ichi Yamamoto had been steadily opening the way for global kosen-rufu, centered on developing a study movement in the organization focused on Nichiren Buddhism’s essential teaching and spreading throughout society the Buddhist ideal that all people are equal.

Priests critical of the Soka Gakkai deemed these efforts as slanderous and persecuted the organization. To stand up to protect the correct teaching and the precious members, and to ensure harmony between the priests and the laity, Shin’ichi engaged in honest discussions with High Priest Nittatsu.

In attending the Saitama Choral Festival on April 15, 1978, he observed, “Music and song arising from vibrant lives inspired by faith create a universal language common to all nations, a cultural bridge linking all humanity” (July 2016, Living Buddhism, p. 54). He further stated that they will play a pivotal role in conveying the Daishonin’s teachings to the world.

On April 20, he attended a meeting marking the opening of the Ito Peace Center in Shizu-oka Prefecture where he remarked that precisely because the Soka Gakkai is advancing kosen-rufu, it is being harshly criticized and attacked.

On April 23, Shin’ichi attended a choral festival held at the Mie Training Center. The following day, before heading to the Mie Culture Center, he visited the home of a women’s leader and conversed with pioneers of the local organization. He traveled to Kansai on the 25th, and, on the 30th, he attended the 1978 Chiba Culture Festival.

In each region he visited, Shin’ichi poured his life into encouraging the members. 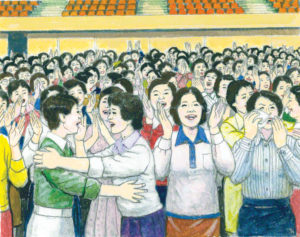 Ode to the Shared Struggle of Mentor and Disciple

On April 21, 1978, Shin’ichi departed on a guidance tour of Chubu Region. On the evening of Shin’ichi’s arrival, as a meeting with representative leaders came to an end and they were about to do gongyo together, two women’s division members approached him to talk.

With some hesitation, one began to speak. It was Yasue Hirahata, the women’s leader of Mie Prefecture, where the members were set to hold a choral festival on April 23.

“We are wondering,” she said, “why the women’s division chorus can’t sing ‘Ever in High Spirits’[1] at our upcoming choral festival. It’s our favorite Soka Gakkai song, as it conveys the feelings of the women’s division. Please allow us to sing it.” …

Bathed in the brilliant morning light,
today again, we strive together,
ever in high spirits.
When we’re happy, when we’re sad,
our hearts call out,
“Sensei, Sensei, our Sensei”

Personally, Shin’ichi found the references to him in the song somewhat embarrassing, but for the women’s division members, it was an ode to the shared struggle of mentor and disciple, expressing their resolve to always work alongside their mentor for the sake of kosen-rufu.

The program for the Mie Choral Festival had originally included the song “Ever in High Spirits,” and the women’s division chorus had rehearsed it. But then, the song was suddenly dropped from the lineup.

This move seemed to have been made out of a desire not to ruffle the feathers of Nichiren Shoshu priests in Chubu who had been invited to the event, a number of whom were known to be critical of the wholehearted trust the Soka Gakkai members placed in their president, Shin’ichi Yamamoto.

The women’s division, however, couldn’t accept this. It was incomprehensible to them that they be barred from singing a song that expressed their seeking spirit toward their mentor. …

They were filled with appreciation toward Shin’ichi because they had overcome their problems and become happy by exerting themselves in their Buddhist practice in accord with his guidance. They were proud to be walking the path of mentor and disciple toward the realization of kosen-rufu.

As such, it wasn’t just a matter of not being able to sing a particular song. They felt that their pride and their very way of life were being trampled on. …

The women’s division members in Mie felt it was wrong that they should be forced to hide their respect and admiration for their mentor. With this appeal on their behalf, it was decided to put “Ever in High Spirits” back on the program for the choral festival. …

When they learned that they would be able to sing “Ever in High Spirits” after all, the members cheered and applauded. Many wiped tears of joy from their eyes. (From the December 2016 Living Buddhism, pp. 48–49 and the January 2017 Living Buddhism, p. 51)

Those who uphold and share the Mystic Law with others are people of action who strive in accord with the Daishonin’s teachings. They are people who show actual proof, raising high the victory banner of kosen-rufu. (October 2015 Living Buddhism, p. 46)

What ultimately causes people to abandon their faith is cowardice and a desire to protect their own interests. (March 2017 Living Buddhism, p. 55)