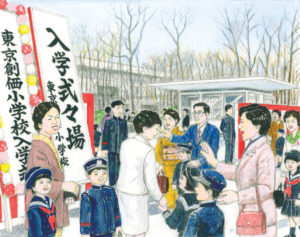 Tokyo Soka Elementary School opened on April 9, 1978, with a festive mood pervading its first entrance ceremony. After the ceremony, the school’s founder, Shin’ichi Yamamoto, took group photos and planted trees with the students to mark the occasion. The previous day, he had toured the campus and engaged in conversations with teachers and students.

Prior to its opening, with great hope for the school’s future, Shin’ichi had joined as many preparatory committee meetings as he could and visited the site while it was still under construction.

After the April 9 commemorative tree planting, he enjoyed lunch with the students and celebrated these “young shoots” who would continue growing into the future.

Shin’ichi continued to visit the school whenever possible, often warmly encouraging students from single-parent or economically disadvantaged households and those who struggled with physical disabilities.

In October, he attended the school’s sports festival. Speaking at the closing ceremony, he expressed his resolve to ensure that each student developed into an outstanding leader of society. And in March 1979, he attended the elementary school’s first student festival, creating many wonderful memories.

When the first students graduated in March 1982, Shin’ichi urged them: “Never, as long as you live, forget about world peace … Always thinking of what you can do for peace, please give your all to developing your abilities” (September 2015 Living Buddhism, p. 48). The following month, the Kansai Soka Elementary School opened in Hirakata City, Osaka.

The Soka school system was now fully spreading its wings, poised to take flight into the 21st century. 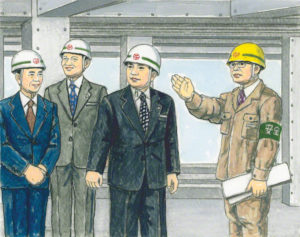 Always Appreciate Those Working Behind the Scenes

In November 1977, about six months before the planned opening of Tokyo Soka Elementary School, Shin’ichi Yamamoto visited the building site to express his appreciation to everyone who was working so hard to meet the construction schedule.

Shin’ichi addressed the site manager, Motoo Suzuki: “I have been focusing my energies on education, having decided to make it the crowning effort of my life. The Tokyo Soka Elementary School will be a place for fostering capable individuals who will shoulder the future. Many leaders who will take responsibility for world peace in the 21st century are sure to emerge from this school. They will soar out into the world. This building will be the stage on which they grow and develop. …

“I know we have caused you a great deal of trouble with the delayed start of construction. I am very grateful for your continued support. I hope you and your team will finish the school safely and without incident.”

He was determined to meet the deadline, and his resolve and commitment inspired his workers to also do their best. The work proceeded at a fast pace.

[Construction was eventually completed on time.] After the April 9, 1978, entrance ceremony … Shin’ichi went over to a cherry tree that stood immediately to the right of the main school gate when entering. This was the tree that had been named in honor of the construction site manager, Motoo Suzuki.

Admiring the tree, Shin’ichi said to the students: “This tree is an expression of our gratitude for those who built this school. … Many people were involved in the construction, working in the rain, freezing north winds and even snow. …

“There are many people around you who are working very hard behind the scenes on your behalf,” Shin’ichi continued. “The people who built this school are but one example. So are your parents. So are the teachers and staff members of the school who will be looking after you from now on, as well as the train drivers and station staff that make it possible for you to get to school each day. They are all working hard from early in the morning until late at night for you. I hope you will grow up to be people who never forget to have appreciation for the efforts of all who support you.” (June 2015 Living Buddhism, pp. 47–49)

The aim of education is not just to impart knowledge, but to help students gain the means to think for themselves and put the knowledge they acquire to positive use. (June 2015 Living Buddhism, p. 44)

By recognizing the debt of gratitude we owe others, we learn the way of humanity. Repaying that gratitude is the starting point of a truly honorable life. (June 2015 Living Buddhism, p. 49)