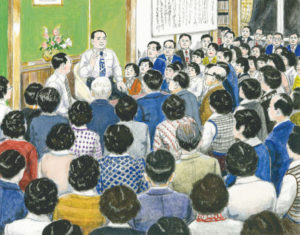 At Soka University, he attended an awards presentation for those who had helped establish the organization’s foundation where he emphasized the importance of pursuing faith, practice and study throughout one’s life.

On May 5, after participating in the young men’s Music Corps National General Meeting, Shin’ichi met informally with TV and newspaper reporters to discuss the topic of fostering youth.

Shin’ichi attended a meeting commemorating the opening of the Nerima Culture Center on May 9. After encouraging a pioneer member, he emphasized, “Those with strong faith are the wealthiest of all” (December 2017 Living Buddhism, p. 48).

From May 14, he attended a spring training session at the Kyushu Training Center in Kagoshima Prefecture. He enjoyed conversations with the members at the Kagoshima Community Center as well as during visits to their homes. He also met with youth who had graduated from Soka University.

Three days later, Shin’ichi flew to Fukuoka Prefecture for the Kyushu Region Executive Conference, where he spoke about the basic attitude leaders need to have when offering personal guidance (see May 2018 Living Buddhism, pp. 50–52).

He then dropped in on a Befu Chapter introductory meeting featuring members’ experiences.

On May 18, he made an impromptu visit to a chapter discussion meeting in Yamaguchi City. There, he spoke about points for holding discussion meetings, including having experiences and guidance that brim with conviction.

Shin’ichi continued his fierce struggle to open the way for kosen-rufu. 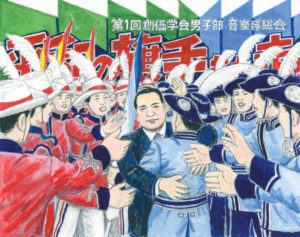 Entrusting Everything to the youth

On May 5, 1978, Shin’ichi attended a young men’s division Music Corps National General Meeting at Soka University’s athletic field and offered encouragement. He later spoke with reporters about his commitment to young people.

After the meeting, Shin’ichi walked down from the guest stand to the field. A cheer went up. He then began to encourage the performers and other youth individually. …

Some had held up their regional banners for the duration of the meeting. And there were even Music Corps members who were still in junior high school. …

As he walked around the athletic field, Shin’ichi shook hands with Music Corps regional leaders. Seeing a junior high school division member, he embraced him in a bear hug, saying: “What a wonderful performance! Please also continue to study hard!” …

Sweat trickling down his forehead and neck, Shin’ichi continued to shake hands and encourage individual members. There were tears in the eyes of some as they watched him thanking people with his whole heart.

Later, in a conference room at Soka University, Shin’ichi met informally with television and newspaper reporters. One of them asked him: “Soka Gakkai youth are always so vibrant. I can also feel the strong bonds of trust you share with them. How have you cultivated such a trusting relationship?”

“Let me share what I said to the youth today,” Shin’ichi responded. “I told them that I am always praying for and looking forward to their growth, and that I wish to entrust everything to them. That is truly how I feel about young people.

“I have always told them that I am there as a stepping stone for them and would do anything for them. The fact is, I have absolute faith in our youth division members and am prepared to encourage and support them in any way possible.

“I am always trying to bring joy to all our members, not only those in the youth division. For example, last year I inscribed 10,784 pieces of calligraphy to present to the members as encouragement. I am totally committed to supporting our members. I think that is why my words resonate with them. And that’s why they open their hearts to me and trust me.” (June 2017 Living Buddhism, p. 53)

In the Soka Gakkai, individuals who are honored for outstanding contributions to kosen-rufu are not being acknowledged just for what they have done in the past; they are people who are always focused on the future and challenging themselves anew for kosen-rufu. (June 2017 Living Buddhism, p. 52)