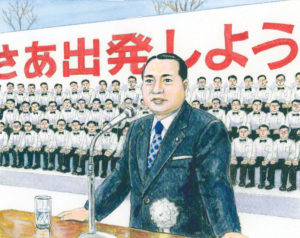 On May 27, Shin’ichi Yamamoto encouraged the Tohoku Region women’s leader and women’s secretary at the Tohoku Peace Center. He also met with representatives of the six prefectures that comprise Tohoku and, the following day, attended the Miyagi Prefecture leaders meeting.

In the evening, he strolled through the ruins of Aoba Castle known for its statue of the legendary leader Date Masamune (1567–1636) on horseback. Twenty-four years prior, he had visited these same ruins with his mentor, Josei Toda, who said, “The Soka Gakkai is advancing toward kosen-rufu with a castle of capable people” (The New Human Revolution, vol. 5, revised edition, p. 213). Remembering these words, he renewed his vow.

On May 29, Shin’ichi traveled to Fukushima Prefecture where he had an informal discussion with representative leaders. The next day, he visited Koriyama Community Center and participated in a memorial service for the center’s caretaker who had passed away the previous year. He also encouraged the care-taker’s widow.

On June 8, he traveled to Hokkaido, and on June 11, he attended the Sixth Hokkaido Youth General Meeting at Atsuta’s Toda Memorial Park. He encouraged those gathered to aim for the next 30 years, expressing his wish they lead lives based on their vow for kosen-rufu.

On June 13, he flew to Kushiro and made his first visit to the Hokkaido Training Center in Betsukai. He encouraged youth event staff there and also visited Shibetsu Village. Two days later, he participated in a chapter leaders meeting for Kushiro and Doto zones.

On the 16th, while in Kamishunbetsu, he praised and wrote a poem for a member, who ran a general store and a roadside diner, and his 77-year-old mother who exuded a sincere seeking spirit.

During his visit to Hokkaido, Shin’ichi encouraged over 20,000 members. 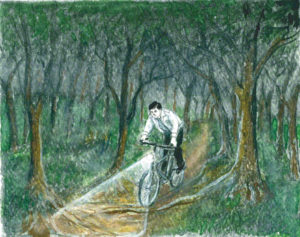 An Epic Journey Driven by a Seeking Spirit

During a visit to Hokkaido in June 1978, Shin’ichi met Katsuji Sugayama, a dairy farmer from a town called Bekkai. Shin’ichi recalled how Sugayama had exerted himself in faith amid challenging financial circumstances as a young man many years before. In September 1960, Sugayama had received information about a young men’s division meeting that was to be held in Kushiro City, but without the means to travel such a long distance, he felt completely deadlocked.

It was a three-hour trip by train to Kushiro, but Katsuji Sugayama didn’t have any money to pay for his fare. “Even though my leaders want me to be there, I don’t know how I can,” he thought. …

When he returned home from work that evening, he saw the faces of his leaders in Kushiro in his mind’s eye. They seemed to be saying: “We’re waiting for you! We believe in you! Stand up!”

Sugayama got to his feet. “That’s it!” he thought. “I can ride my bicycle! I can’t let my circumstances hold me back. I want to meet with my fellow members and learn about President Yamamoto. … If I leave now, I can get there in time.”

He hopped onto his bicycle and pedaled with all his might, dispelling all hesitation. The road was unpaved, and he had to grip the handlebars tight so the tree roots stretching across the road wouldn’t snag his tires.

There were no streetlamps or lights from people’s homes. The moon and the stars were hidden behind a thick blanket of clouds. … But he reminded himself that his seniors in faith were waiting for him, hoping he would attend, and he determined not to give up.

Finally dawn arrived. The city of Kushiro appeared through the mist.

“I will see everyone soon!” He sighed with relief. Then suddenly all his strength drained from him and he felt overcome with exhaustion. He jumped off his bicycle, lay down on the grass by the roadside and stretched out. He immediately fell into a deep sleep.

The bright sun awakened him. He had slept a few hours and felt refreshed.

He mounted his bicycle and started pedaling energetically again, arriving in Kushiro at 8 in the morning.

It had taken all night for Sugayama to travel more than 62 miles. His face was sweaty and smudged with grime, but it felt as if a burden had been lifted from his heart. His strong seeking spirit had enabled him to surmount his weaknesses.

All the participants at the young men’s division meeting welcomed this champion from Bekkai with applause and cheers.

He had taught them the true spirit of the young men’s division through his example. (tentative translation)

From the long-term perspective, this is an age when tenacity to confront the current of the times is crucial. Unless our foundation is strong, we will collapse in the face of this ever-changing era. Persistence is key in both life and kosen-rufu. (tentative translation)

Excerpts From Nichiren’s Writings in Volume 27