This installment, published in the March 18, 2021, Seikyo Shimbun, focuses on passages from Nichiren Daishonin’s writings that Ikeda Sensei discusses in volume 27 of The New Human Revolution. The official English translation of volume 27 will be published in the future. As such, these excerpts are subject to later revisions.

“Do not follow even the high priest if he goes against the Buddha’s teachings and propounds his own views.” (“Twenty-six Admonitions of Nikko,” Gosho zenshu, p. 1618) 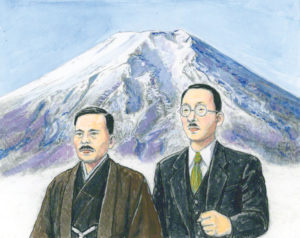 At the end of June 1943, founding Soka Gakkai President Tsunesaburo Makiguchi and second Soka Gakkai President Josei Toda were summoned to the head temple of Nichiren Shoshu where, in the presence of High Priest Suzuki Nikkyo, a senior priest pressured them to accept the Shinto talisman that symbolically expressed acquiescence with the official state ideology. The priesthood had already agreed to do this, fearing persecution by the militarist government.

Accepting the Shinto talisman was an extremely grave matter, touching on the very heart of the teachings and doctrines of Nichiren Buddhism. It also signified forfeiting religious freedom and submitting to the militarist government’s policy of thought control.

Mr. Makiguchi replied adamantly: “I cannot agree to this. I absolutely refuse to accept the talisman.” …

Suppressing the raging emotions in his heart, Mr. Makiguchi said to his disciple Josei Toda after leaving the meeting: “What I lament is not the ruin of a single school but the destruction of an entire nation before our very eyes. I’m afraid of the terrible sorrow this would bring Nichiren Daishonin. Isn’t this precisely the time to remonstrate with the government?”

His disciple responded: “Sensei, I will fight with my life. Whatever happens, I will remain steadfastly at your side.”

The Soka mentor-disciple relationship is a spiritual bond based on a commitment to give one’s very life for kosen-rufu.

Soon afterward, Mr. Makiguchi and Mr. Toda were arrested on suspicion of high treason and violation of the Peace Preservation Law, and subsequently imprisoned.

Thrown into a state of panic by the arrest of Mr. Makiguchi and other leaders of the lay organization, Nichiren Shoshu moved to sever ties with the Soka Kyoiku Gakkai,[1] banning Mr. Makiguchi and his fellow members from visiting the head temple.

The pure stream of Nichiren Buddhism was rigorously protected by Soka mentor and disciple Tsunesaburo Makiguchi and Josei Toda, who upheld the correct teaching at the risk of their lives. (November 2015 Living Buddhism, p. 47)

“The varied sufferings that all living beings undergo—all these are Nichiren’s own sufferings.” (The Record of the Orally Transmitted Teachings, p. 138) 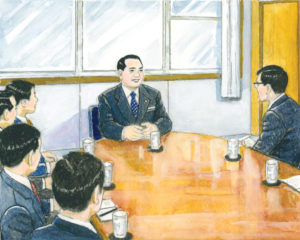 On May 5, 1978, while meeting informally with television and newspaper reporters, Shin’ichi Yamamoto reflects on the importance of empathizing with the struggles of the people. He also speaks to the reporters about how young people can develop this capacity.

These words express the infinitely compassionate life state of Nichiren Daishonin, who regarded the sufferings of humankind as his own and opened the way for all people to attain enlightenment. As his disciples, we strive to live with this same spirit.

Rather than being absorbed only with our own problems, we empathize with and share the struggles of all kinds of people, dedicating our lives to kosen-rufu in order to show them the way to indestructible happiness.

We listen to the problems and concerns of our friends and do our best to encourage them. Out of a sincere wish for their happiness, we talk with them about Nichiren Buddhism and chant for them. It is through such heartfelt daily efforts that we connect our lives to Nichiren Daishonin.

By living this way, we break out of the confining shell of egoism and bring forth the expansive life states of the Bodhisattvas of the Earth and Nichiren Daishonin, thereby setting in motion a profound inner transformation. …

Shin’ichi told the reporters: “We can’t understand others’ hardships if we haven’t experienced suffering ourselves. If leaders who lack such empathy come to hold sway over society, it will be a great misfortune for its citizens. That’s why I’m always encouraging the youth, our future leaders, to take on challenges and hardships. I want them to become people who can understand others’ suffering. To be able to do that, they mustn’t avoid difficulties but willingly accept and wrestle with them more than anyone else.” (From the July 2017 Living Buddhism, p. 53 and the August 2017 Living Buddhism, p. 53)

Human Rights in the Twenty-first Century