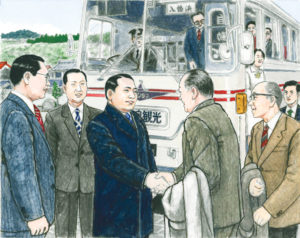 The New Year’s Headquarters Leaders Meeting in the Soka Gakkai’s second Year of Study was held on January 6, 1978. The implementation of a new chapter system for the second phase of kosen-rufu was announced at this meeting.

Existing greater blocks would become chapters. Like their predecessors in the pioneering days, they would raise the banner of the Law, steadily building an organization in which members carry on the Soka tradition of developing faith through challenging great struggles (see The New Human Revolution, vol. 26, p. 101).

Seeing the women’s division as the driving force for fresh development under the new chapter system, Shin’ichi Yamamoto attended the Tokyo No. 2 Headquarters Women’s Division Gongyo Meeting on January 14.

To lead efforts in promoting Buddhist study, in early January he attended the Master Professors Conference as well as the Study Department General Meeting, which were held toward the January 15 study department advanced-level examinations.

On January 16, Shin’ichi traveled to Matsuyama in Ehime Prefecture. He encouraged the families of prefectural youth division leaders as well as the caretaker of the Ehime Culture Center. He sought to spotlight the efforts of those working diligently behind the scenes to support the Soka Gakkai.

The next day, he participated in a leaders meeting and, on January 18, he visited the home of a couple who had pioneered kosen-rufu efforts in Matsuyama.

That evening, Shin’ichi stood at the entryway of the Ehime Culture Center, welcoming members arriving for the meeting commemorating Matsuyama Chapter’s 18th anniversary. During the meeting, he stressed that one’s human revolution and character development are the key to advancing kosen-rufu.

On January 19, his last day in Ehime, Shin’ichi held a gongyo meeting at the request of the women’s division members, demonstrating through his actions that leaders exist for the sake of the members. 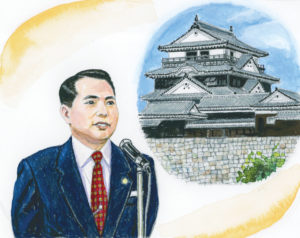 In his remarks, Shin’ichi stressed that Soka Gakkai centers are citadels for fostering capable individuals, citadels for leading people to enlightenment and citadels of compassion. He urged the members to strive with the determination to help all people become happy and realize kosen-rufu in Matsuyama.

As he was leaving the center, Shin’ichi shook hands with the participants. Naokazu Hanyu, who had been a member for one year by then, was also present. Shin’ichi firmly grasped Naokazu’s hand and, looking him straight in the eye, said, “I entrust Matsuyama to you!”

Responding to Shin’ichi’s grasp with equal firmness, Naokazu replied fervently, “I will do my best!”

He vowed in his heart: “I have made a personal pledge and promise to President Yamamoto. I must make sure it doesn’t end in empty words. I will take responsibility for kosen-rufu in Matsuyama!”

With that determination, he strove tirelessly. He and his wife, Misako, served as first district, and then chapter, men’s and women’s leaders in the area during the pioneering days. They both made kosen-rufu and the organization in Matsuyama their top priorities. …

Realizing that members were inconvenienced because there wasn’t a local center for activities, the Hanyus opened their home as a meeting place. At that time, they lived on the second floor of their kimono fabric shop, and members had to enter through the shop.

A representative of the tax office, hearing that there were constantly people coming and going from the shop, came to do an audit. He believed that Naokazu must be making much more money than he was declaring. But when Naokazu got out his account books, the officer declined to look over them and left. He had realized that though there were many visitors, they were actually going up to the second floor and leaving with no purchases because they were there to attend meetings.

In his business, Naokazu always strove to take the best possible care of his customers. He adopted the same approach toward his fellow members. …

When the Hanyus were men’s and women’s district leaders, most of the members in their district developed into first-rate champions of kosen-rufu. Ehime Chapter, to which they belonged, contained more than 10 districts, but often more than half of the propagation results originated from the Hanyus’ district. (NHR-26, 152–54)

A solid organization, an invincible organization in the realm of kosen-rufu, is one where experiences of benefit blossom endlessly in the members’ lives. (NHR-26, 103)

Humanism is not a special way of living; it’s the simple act of empathizing with others—reaching out and encouraging those who are striving hard or suffering and sharing the joys of those who are happy. (NHR-26, 149)