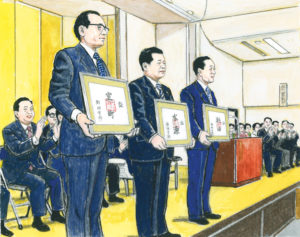 On January 19, Shinichi Yamamoto traveled to the Shikoku Training Center in Kagawa Prefecture. It was nighttime when he stood in the garden overlooking the sea and gazed toward the site of the Battle of Yashima, which had taken place during the Genpei War (1180–85).[1] He thought of Nichiren Daishonin’s treatise, “On Establishing the Correct Teaching for the Peace of the Land,” vowing to pursue a course of action aimed at “casting off the transient and revealing the true” for himself and the Soka Gakkai, on a fresh and deeper level.

At an informal gathering with region and prefectural leaders that evening, Shin’ichi encouraged them to give four times as much guidance to individual members as they give at meetings (see The New Human Revolution, vol. 26, p. 199).

The headquarters leaders meeting held on January 21 at the Shikoku Training Center marked the start of the new chapter system, and chapter certificates were presented to representative leaders.

Shin’ichi stressed at the meeting that a vital attitude in faith for leaders is to do all they can to respect, value, understand, support and praise each person (see NHR-26, 230).

The next day, a gongyo and guidance session was held for anyone wanting to attend. Shin’ichi put everything into encouraging the participants. In the afternoon, he visited the future site of the Soka Gakkai Takamatsu Auditorium, and warmly encouraged members who had braved wintry winds to wait for him there.

Shin’ichi headed from Shikoku to Kansai and attended a January 25 meeting commemorating the 17th anniversary of the establishment of Nara Chapter at the Asuka Culture Center. The founding chapter women’s and men’s leaders were presented with flower bouquets.

Commending these valiant leaders for kosen-rufu, Shin’ichi emphasized that sharing Nichiren Buddhism with others is the true spirit and mission of the Soka Gakkai. He also urged everyone to establish in their own lives “a citadel of faith and a citadel of the mentor-disciple spirit dedicated to kosen-rufu” (NHR-26, 282). 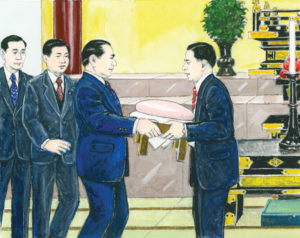 Always Treasure and Encourage the Members!

In January 1978, Shin’ichi Yamamoto visited Nara Prefecture and attended a meeting commemorating the 17th anniversary of Nara Chapter’s establishment. Katsuo Nishizaka took his place at the podium to give his determination as chapter men’s leader.

[Katsuo Nishizaka] reported on how chapter members who had overcome poverty and illness had shown actual proof of benefit through their Buddhist practice and joyfully talked about their experiences at discussion meetings. He then shared three mottoes the chapter had adopted for its fresh start: 1) “When you’re troubled, seek guidance!” 2) “Instead of complaining, chant!” and 3) “Instead of worrying, take action!”

“With these mottoes as my guide,” he said, “I’ll strive to encourage each member and actively carry out dialogues with friends about Buddhism.”

Shin’ichi wanted each chapter to carry out activities cheerfully and positively, in a way that best reflected their own unique character, because that is the driving force for dramatic progress.

In closing, Katsuo said: “The year before last, President Yamamoto presented a poem to us here in Nara:

Fear not—
brimming with benefit
and proudly flying
the banner of the Law,
Nara is resolute.

“True to the spirit of this poem, I am determined to exert all my energy for the advance of Nara!” His rousing declaration reflected his utmost earnestness.

Shin’ichi was impressed by the new leader’s spirit. He wanted to present him with a commemorative gift as encouragement, too, but there was nothing at hand.

Seeing a huge mochi rice cake, almost two feet in diameter, placed as an offering in front of the Gohonzon, he said to the prefecture leader and others, “Let’s give this to Katsuo!”

The participants applauded. Shin’ichi lifted the stand together with the rice cake. It was incredibly heavy, weighing more than 40 pounds, so prefecture leader Tokumitsu Okimoto reached out to assist him. But Shin’ichi had already encircled the stand with his arms and was carrying it over to Katsuo. Shin’ichi’s suit was dusted with the flour from the surface of the rice cake. But without taking notice, he said to Katsuo, “I’m counting on you!” He handed over the rice cake and Katsuo received it, stumbling slightly under its weight.

Observing Shin’ichi’s actions, Tokumitsu felt as though his mentor was teaching him how a leader should be. It was as though Shin’ichi was saying: “Be self-reliant and willing to go to any lengths! Always treasure and encourage the members. That is the role of a Soka Gakkai leader!” (NHR-26, 275–76)

As practitioners of Nichiren Buddhism, our practice begins and ends with chanting sincerely to the Gohonzon. Without chanting Nam-myoho-renge-kyo, there can be no true victory in our efforts. (NHR-26, 201)

Volume 26: Chapter Two—Banner of the Law