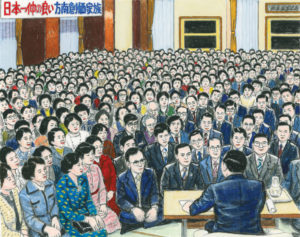 On January 27, 1978, Shin’ichi Yamamoto visited Suginami Ward in Tokyo to attend the Honan Chapter inaugural meeting. This kicked off the nationwide inaugural chapter meetings that marked the start of the new chapter system.

Shin’ichi observed that rather than being an outpost, like a regional office of a business, the chapter serves the same role and mission in the local community as the Soka Gakkai Headquarters serves on a national scale (see The New Human Revolution, vol. 26, p. 299). Thus, he emphasized the importance of members vibrantly engaging in their activities.

On January 30, Shin’ichi attended a chapter leaders meeting for Tokyo No. 2 Area.

The following month, at the February 18 Headquarters Leaders Meeting, he observed: “I hope you will remember that racking your brains and dedicating yourselves to support the members’ growth in faith also leads to your own development” (NHR-26, 335).

The next day, he spoke to young men’s leaders in the Shin’etsu Region (encompassing Nagano and Niigata prefectures), citing Walt Whitman, who wrote: “Allons! (Let’s go!) through struggles and wars! / The goal that was named cannot be countermanded.”[1] He emphasized that arduous struggles and difficulties are inevitable in advancing kosen-rufu and called on the youth to strengthen their resolve with the cry “Allons!” (see NHR-26, 339–40).

Starting in Saitama Prefecture, Shin’ichi sought to solidify the front lines of the organization—the sub-blocks. On March 6, in an informal meeting with top Soka Gakkai leaders, he recalled giving lectures in Kawagoe District in Saitama Prefecture while in the youth division, affirming the importance of the “absolute determination to give my all and make it a success” (NHR-26, 351).

At the Saitama Prefecture women’s sub-block leaders meeting, he underscored that “true happiness is found in practicing Nichiren Buddhism ourselves and sharing it with others” (NHR-26, 380).

Through Shin’ichi’s intense struggle, the new chapter system was soon up and running, breathing fresh life into the whole organization.

In mid-March, he said to some of the top leaders that people tend to relax when things start running smoothly, but “only by resisting this daily can we advance dynamically,” he said (NHR-26, 384).

At the same time, criticisms and attacks from corrupt Nichiren Shoshu priests were intensifying with each passing day. 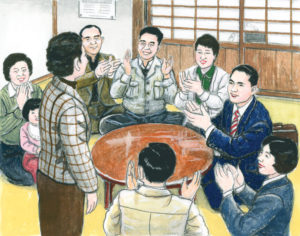 Expansion Arises From a Chain Reaction of Joy

In January 1952, Shin’ichi Yamamoto was appointed chapter advisor to Tokyo’s Kamata Chapter, where he led the historic February Campaign. At the same time, he was responsible for lecturing on Nichiren Daishonin’s writings in Kawagoe, Saitama. After one of these lectures, a men’s leader asked Shin’ichi a question.

The leader said to Shin’ichi: “The campaign in Kamata this February was truly astonishing. I heard that with your leadership, more than 200 new households were introduced to Nichiren Buddhism. I’ve been wanting to ask you how it is possible to achieve such a result.”

“I believe that the time we are in now, with Mr. Toda as our president, is a precious opportunity for the development of kosen-rufu,” Shin’ichi said. “How much our organization can grow and how many capable individuals we can foster in the next few years will decide our victory. There is not a more crucial moment in the history of Buddhism than now.

“That’s why I decided, as his disciple, to stand up and take action with the spirit of not begrudging my life. Especially because February is the birth month of President Toda, our great leader in kosen-rufu, I decided to set a goal for myself. And I urged the members to strive their hardest to introduce many others to Buddhism. The Kamata members heard my call.

“When we decide to challenge ourselves to respond to our mentor, courage and joy well up from within us. That’s what I wanted the Kamata members to realize.

“Further, I repeatedly called on the members to engage in this struggle in order to transform their karma and life state. All the members were struggling with serious financial, health and other problems.

“The aim of our Buddhist practice—our chanting and our activities to share Buddhism with others—is to transform our karma and become happy. Soka Gakkai activities are actually for our own benefit. There is no suffering that cannot be overcome through our efforts to chant and teach others about Buddhism. Mr. Toda was unequivocal on this point.

“The members all firmly resolved to transform their karma, roused their fighting spirit and started to make great efforts. …

“Then, one after another, members began experiencing results such as overcoming illnesses or finally finding a job after being unemployed. … On hearing their stories, the number of people who were inspired to join the Soka Gakkai or existing members who were roused to make greater efforts to share Buddhism with others just continued to grow.

“When a ripple of benefit and joy spreads, it gives startling momentum to our activities.” (NHR-26, 370–73)

To continue is important in faith, but this doesn’t mean being content with just doing the same thing you did yesterday. That’s just force of habit. The real meaning of continuing in faith is rousing oneself to keep taking on challenges day after day, with fresh determination. (NHR-26, 340)

Excerpts From Nichiren’s Writings in Volume 26