This installment, published in the February 17, 2021, issue of the Seikyo Shimbun, focuses on passages from Nichiren Daishonin’s writings that Ikeda Sensei discusses in volume 26 of The New Human Revolution.

“Shakyamuni Buddha had all the thirty-two auspicious features, his body a golden color, his face like the full moon. And yet when evil persons looked at him, some saw his color as ashen, some saw him as sooty, and some saw him as an enemy.” (“On Losing Faith and Falling into Evil,” The Writings of Nichiren Daishonin, vol. 2, p. 1079) 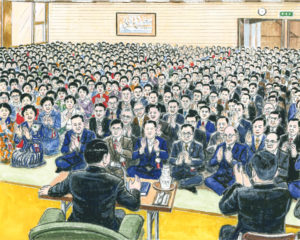 In October 1977, Shin’ichi Yamamoto attended a commemorative gongyo meeting and other celebratory gatherings marking the opening of Toda Auditorium, part of the Toda Memorial Park Cemetery in Atsuta, Hokkaido. Because the path of kosen-rufu is always steep, Shin’ichi urged the members to be prepared for anything.

“Shakyamuni was born in India with these thirty-two superior physical characteristics that distinguished him as a great man. He was respected and revered by the people as the Buddha. Yet when people with impure hearts looked at him, they saw him as lowly or tainted, and some saw him as an enemy.

“In contrast to Shakyamuni, Nichiren Daishonin was born as an ordinary being in the evil age of the Latter Day of the Law. As such, it was only to be expected that he would encounter hostility and opposition in propagating his teaching.

“For our part, we are ordinary people, followers of Nichiren Daishonin. We are making kosen-rufu a reality exactly as the Daishonin instructs. Though we are unexceptional beings who have been disparaged by others, we are carrying out the noblest of missions. It is inevitable that we, too, will encounter all sorts of trials and hardships.

“That is why Mr. Makiguchi and Mr. Toda were jailed for their beliefs, and Mr. Makiguchi ultimately died in prison. I have also faced continual opposition throughout my life. In the light of Nichiren’s writings, the Soka Gakkai will continue to face harsh obstacles.

“But we mustn’t allow ourselves to be defeated. We must not flinch.” …

The path of upholding the correct teachings is always fraught with great difficulties—it is unflinching faith that awakens us to this truth. (The New Human Revolution, vol. 26, pp. 18–19)

“Each of you should summon up the courage of a lion king and never succumb to threats from anyone. The lion king fears no other beast, nor do its cubs. Slanderers are like barking foxes, but Nichiren’s followers are like roaring lions.” (“On Persecutions Befalling the Sage,” WND-1, 997) 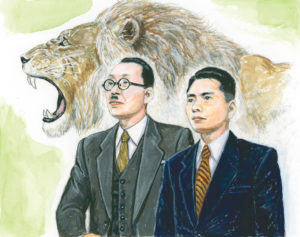 On September 25, 1951, in the first of a series of study lectures in Kawagoe District in Saitama Prefecture, a young Shin’ichi Yamamoto discussed the meaning of having the “heart of a lion king.”

“What is meant by ‘heart of a lion king’? It is the towering spirit of Nichiren Daishonin, his powerful wish to lead all people in the Latter Day of the Law to enlightenment. This is also the spirit of President Makiguchi and President Toda, who rose into action to realize kosen-rufu, just as the Daishonin teaches.

“‘Lion’ in ‘lion king’ is written with the Chinese characters for teacher and child, representing mentor and disciple. In other words, when disciples align their spirit with their mentor and stand up with the same commitment, they can summon forth the bold and fearless heart of the lion king within them.

“Each day, I tell myself: ‘As a disciple of President Toda, I will respond to his aspirations! I will create a record of kosen-rufu that would make him proud!’ By doing so, no matter what difficulty I may encounter, I can bring forth the courage to never become disheartened.

“Those who always remember their mentor’s spirit in their heart, who are always living together with their mentor, will never stray from the correct path in life, the path to happiness. When we live with our mentor in our heart, we cannot allow ourselves to be cowardly or lazy; we are spurred to be courageous, challenge ourselves and cast aside our arrogance. We may be able to deceive others but not our mentor in our hearts.

“We have a truly great mentor in President Toda. Those who, no matter where they are, always carry their mentor in their hearts are true disciples.” (NHR-26, 359–60)

Walking With the Mahatma