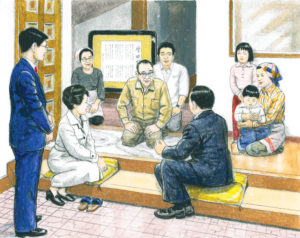 On September 30, 1977, Shin’ichi Yamamoto traveled to the recently completed Toda Memorial Park Cemetery, located in the hometown of his mentor, Josei Toda, in Atsuta Village (present-day Atsuta Ward, Ishikari City), Hokkaido. This was a way to pay eternal tribute to President Toda and build a “spiritual home for Soka mentors and disciples” (The New Human Revolution, vol. 26, p. 10).

That evening after visiting Toda Inn, which was run by Mr. Toda’s relatives, he headed to the beach, where Mr. Toda had said to him: “You will pave the way for kosen-rufu throughout the world. I will create the blueprint; you will make it a reality” (NHR-26, 15).

On October 1, at an event marking the opening of Toda Auditorium, Shin’ichi said that this memorial park symbolizes the “eternal journey of kosen-rufu” and the “journey of mentor and disciple” (see NHR-26, 17).

Afterward, he shared with the youth supporting the event that the night before the young men’s division was established (in 1951), Mr. Toda had entrusted kosen-rufu to him and the youth. Shin’ichi urged these youth to cherish the desire to accomplish kosen-rufu throughout their lives.

The next day, at the opening ceremony for Toda Memorial Park Cemetery, Shin’ichi called on everyone to make Atsuta “an ‘eternal city’ of the oneness of life and death” (NHR-26, 41), and to regard the memorial park as “an oasis of spiritual renewal” (NHR-26, 43).

At a memorial service on October 3 for pioneers who had dedicated themselves to kosen-rufu in Hokkaido, Shin’ichi quoted from Nichiren’s writings, and stated that those who dedicate themselves to kosen-rufu are “Buddhas in life.” And when they pass away, having manifested the worlds of bodhisattva and Buddhahood while alive, they become “Buddhas in death” (NHR-26, 61).

On October 7, he offered three guidelines to the members: to make human revolution their foundation, to treasure their community and to pass on their faith to their families (see NHR-26, 83). He continued encouraging and offering guidance to the members up until his departure to Tokyo. 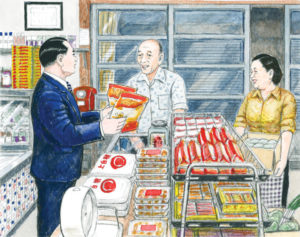 Trust Is Built on Promises Kept

[When Shin’ichi arrived at the Motofuji’s shop,] Toru [Motofuji] came rushing out from the back of the shop exclaiming, “Sensei!” Tomi was lost for words.

Smiling, Shin’ichi said: “I’ve come to keep the promise I made 17 years ago. I’ve been saving up my money so I could buy everything you have in the store!”

Toru looked at Shin’ichi with a blank expression. “Your promise of 17 years ago?”

“That’s right. In 1960, when I came to Atsuta to pay my respects to everyone after becoming the Soka Gakkai president, I promised to visit your home.”

Trust is built on promises kept. The most important thing in gaining the trust of others is to keep our promises. By keeping our promises, even if those to whom we’ve made them have forgotten, we come to establish our own path, creed and character.

Shin’ichi bought numerous articles from the goods in the Motofujis’ small shop. …

Toru’s smiling face gradually took on an expression of deep emotion. He thought to himself: “President Yamamoto has come all the way to visit our shop, despite being so busy, because of a promise he made 17 years ago. And he is buying all this to encourage us. Is there anyone else like him in the world?”

When Shin’ichi had finished his shopping, he said to the Motofujis: “A small shop like this may not make the profits that a large supermarket does, but it has a vital role to play as a lifeline for people in the local community.

“Please put down roots in your community, becoming a solid, reliable presence like a sturdy tree. The shop’s success and your happiness will be proof of your victory in faith. I’ll come again. Stay well!”

Toru was awakened by Shin’ichi’s words. Realizing that the shop didn’t exist solely to support his family but was also there to support the lives of those in their community, he felt a deep sense of mission. (NHR-26, 35–37)

When our spirits are broken, the seeds of hope decay and cannot sprout. Hope is born from the earth of a strong, resourceful spirit; it is not something found outside ourselves. (NHR-26, 2)

Volume 26: Chapter Two—Banner of the Law