Volume 26 of The New Human Revolution begins with Shin’ichi Yamamoto’s visit to Atsuta Village (now Atsuta Ward, Ishikari City) in Hokkaido, the hometown of his mentor, second Soka Gakkai President Josei Toda, in September 1977. There, the Soka Gakkai had constructed the Toda Memorial Park Cemetery, named in his honor, and Shin’ichi goes to attend its opening ceremony on October 2.

The idea for establishing a memorial park originated from a remark once made by President Toda: “Wouldn’t it be wonderful if there were a place where we could rest quietly with our comrades when we’ve finished?”[1]Shin’ichi notes that, in light of the Buddhist principle of the oneness of life and death, these words also expressed Mr. Toda’s determination to once again be reborn and strive alongside his comrades for kosen-rufu in the next lifetime. From this perspective, the memorial park could be taken as a symbol of the eternal journey of kosen-rufu and of mentor and disciple. At a commemorative gongyo meeting, Shin’ichi, who had engraved his mentor’s words in his heart and striven to make them a reality, declares: “It is no exaggeration to say that, with this, the foundation of the Soka Gakkai has been solidly established.”[2]

At the same time that the Soka Gakkai was steadfastly laying the foundations of kosen-rufu, however, a group of Nichiren Shoshu priests had been plotting to drive a wedge between Shin’ichi and the membership. By 1977, there were various signs leading up to what would become known as the first priesthood issue.

When the Soka Gakkai launched the second phase of kosen-rufu in autumn 1972, it set about building its own community centers, whereas it had previously prioritized constructing and donating temples in support of the Nichiren Shoshu priesthood. It was around this time that it also embarked on a new and ambitious study movement to further promote Nichiren Buddhism around the world.

A group of Nichiren Shoshu priests misconstrued these sincere undertakings by the Soka Gakkai. Viewing them as an attempt to become independent from the priesthood, they began relentlessly criticizing the Soka Gakkai at various temple events from around 1977. Despite this, Shin’ichi did his best to reconcile with them based on his sincere wish to maintain harmonious relations between the priesthood and laity.

It is against this backdrop that Shin’ichi addresses the participants at the opening ceremony of the Toda Memorial Park Cemetery, telling them: “My friends, whatever happens, don’t be surprised or afraid. I will be your roof and breakwater in the fiercest of storms.”[3]

He was filled with an unwavering determination to protect his fellow members no matter what obstacles might arise.

With Shin’ichi approaching his 50th birthday [on January 2, 1978], the “Banner of the Law” and “Valiant Leaders” chapters of volume 26 also contain descriptions of his thoughts on the significance of this milestone in a person’s life. Nichiren Daishonin was 50[4] when he experienced the Tatsunokuchi Persecution and was exiled to Sado Island. Calling to mind Nichiren’s dauntless life state at that time [which Nichiren later described as “casting off the transient and revealing the true”], Shin’ichi makes a solemn vow to likewise “reveal the true,” both in his own life as well as in the Soka Gakkai, on a fresh and deeper level.

The “Valiant Leaders” chapter explains that, for us, the challenge of casting off the transient and revealing the true is about making kosen-rufu—the realization of happiness for all people—our highest purpose and mission in life and carrying out this courageous practice in our daily lives, awakened to our identity as Bodhisattvas of the Earth.

The Basic Actions Required of Leaders

At the New Year’s Headquarters Leaders Meeting in 1978, the implementation of a new chapter system for the second phase of kosen-rufu was announced. This marked a fresh start for the organization, with greater blocks becoming chapters and the greater block leaders of the four divisions in turn becoming chapter leaders. In light of this new system and the increasing multidimensional nature of Soka Gakkai activities, Shin’ichi stresses that it is all the more important for those in leadership positions to “stay true to the basics.” He offers three guidelines regarding the basic actions required of leaders.

The first is to prioritize personal guidance. “I estimate that, now, four times as much guidance is given at meetings than is given to individuals personally,”[5] he states. “But if you make it your goal to reverse that ratio, you’ll be able to foster many more capable individuals and develop a stronger organization. Above all, you yourselves will be able to grow as leaders.”[6]

The second is to make the “shakubuku spirit”—the desire to share this Buddhism with others—burn brightly throughout the organization. Shin’ichi wanted the chapter leaders of all four divisions to take the lead in Soka Gakkai activities in complete accord with his spirit.

The third is to regard the chapter as the “Soka Gakkai headquarters” of the community and to promote and establish the teachings of Buddhism in one’s local area with this sense of awareness. In Shin’ichi’s opinion, the chapter held the same responsibility and mission as the headquarters.

This January, we were able to kick off the year with the holding of the First Headquarters Leaders Meeting and the First Youth Division Leaders Meeting of the decade leading up to our centennial in 2030. Faced with the COVID-19 pandemic, the ways in which we hold meetings and encourage our fellow members have diversified, contributing to the acceleration of a new tide of kosen-rufu worldwide. While our movement always needs to adapt to the changing times, the core spirit of our activities should not change. Now, in this time of crisis, it is all the more vital that we seek to study and embrace the Soka Gakkai spirit from The New Human Revolution and actively take part in activities.

Just as volume 26 reaffirms that “a change in people’s underlying attitude is essential to revitalizing the organization and promoting kosen-rufu in our communities,”[7] a leader’s underlying attitude or single-minded resolve is what serves as the driving force for our advancement. Putting into practice the guidelines set forth by the mentor, our continued engagement in this process is what enables us to build a solid foundation for opening a new era of kosen-rufu.

Keys for the Culminating Years

A major theme of this volume is how to bring the culminating years of one’s life to full fruition. In the “Atsuta” chapter, Shin’ichi stresses that “old age is not simply a period of waiting for the end. It is the time for us to put the finishing touches on this life and to prepare for our next life.”[8] He shares that the keys in doing so, in terms both of our personal lives and of securing the foundations of kosen-rufu, are:

1) Start with your own human revolution;
2) Spread friendship and trust in the community; and
3) Pass on your faith to the next generation.

In the “Bold Advance” chapter, through an account of Shin’ichi’s summer guidance campaign of 1957, we also see how he went all out in support of his mentor’s culminating undertaking—that of achieving a Soka Gakkai membership of 750,000 households. That year, the attainment of this goal had finally come within sight. Determined to secure victory for his mentor, in August, Shin’ichi, who was in charge of Tokyo’s Arakawa ward, threw himself into encouraging the members and led the way to a 10 percent increase in membership—more than 200 new households—in just a single week.

He describes his motivation at that time as follows:

The final struggle of the mentor’s life is to make sure that the disciples are achieving great victories. As disciples, therefore, it is important that we show actual proof so that we can proudly report to our mentor: “I have triumphed!” This is the oneness of mentor and disciple.

Because I had made up my mind in this way, I was able to tap my full strength.[9]

Genuine unity between mentor and disciple cannot be forged if the disciples adopt a passive approach. It all comes down to the disciples “deeply studying and internalizing the mentor’s guidance and achieving victories for the happiness of others and the development of kosen-rufu.”[10]

Engraving this spirit in our hearts, let us each strive to achieve victory in our lives. 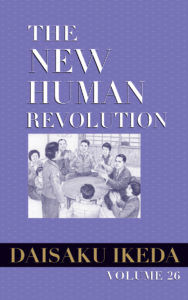 Banner of the Law
In January 1978, a new chapter structure for the “second phase” of the kosen-rufu movement is announced.

Valiant Leaders
On January 19, Shin’ichi visits the Shikoku Training Center. On January 25, he attends a commemorative leaders meeting in Nara.

Bold Advance
On January 27, Shin’ichi attends the inaugural meeting of Honan Chapter in Suginami, Tokyo. On February 18, he attends the Soka Gakkai Headquarters Leaders Meeting at the Tachikawa Culture Center, and the next day, he encourages young men’s division members from the Shin’etsu region.