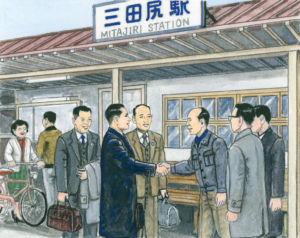 In 1977, Shin’ichi Yamamoto attended successive gongyo sessions to celebrate the openings of community centers throughout Japan.

On May 18, he traveled to the southwestern-most island of Kyushu to attend a headquarters leaders meeting at the Kyushu Peace Center. He urged participants to foster capable individuals, while also showing warm consideration for the elderly members who had made important contributions to the kosen-rufu movement.

In the early evening, he participated in an informal discussion where he spoke with pioneers from the Yamaguchi Campaign about putting the finishing touches on life. He offered three guidelines: “The first thing is to have a spirit of gratitude and dedication to kosen-rufu for as long as you live” (The New Human Revolution, vol. 25, p. 128). “Second … demonstrate actual proof of your happiness” (NHR-25, 131). “Third, in your family and in the Soka Gakkai, strive to foster outstanding successors” (NHR-25, 135).

After the meeting, during a tour of the city of Yamaguchi by car, he saw Xavier Memorial Church and thought about Francis Xavier’s efforts to propagate Christianity in Japan. In addition, thinking of Nichiren’s struggle to spread the Mystic Law, Shin’ichi resolved to foster genuine disciples who would carry on this struggle with selfless dedication.

As he visited the Yamaguchi Culture Center, the Tokuyama Culture Center and the Hofu Community Center, he met with one fellow member after another, striving to ignite an undying flame of kosen-rufu in each person’s heart. 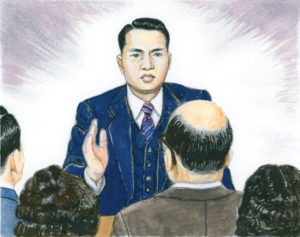 An Organization of Respectworthy Ordinary People

In the autumn of 1956, Shin’ichi Yamamoto was dispatched to lead a large-scale propagation campaign in Yamaguchi Prefecture. A great number of the members were powerfully inspired by Shin’ichi to stand up in faith at this time. At a discussion meeting in Hofu, Yamaguchi, he responded to questions from the participants who were suffering from various problems.

As Shin’ichi spoke, the people’s doubts were dispelled and the atmosphere changed, becoming filled with the light of hope and revitalization.

After Shin’ichi had responded to most of the questions, a man with a mustache, a locally influential figure who was brought by a friend, said in a condescending tone: “Unlike the other people here, I don’t have any financial troubles. In fact, the only problem I have is trying to think what my next successful business venture will be. Can you give me any tips about this?” …

Shin’ichi’s powerful voice reverberated in the room: “The Soka Gakkai is the ally of the people, the ally of those who are suffering. People obsessed with such superficialities as appearance, status and titles will never genuinely understand the heart of the Soka Gakkai or Buddhism.”

The businessman was taken aback by Shin’ichi’s direct words and blinked as if stunned.

Shin’ichi began to speak more softly: “Most of the members here are suffering from financial problems or illness.

“But they are trying very hard to overcome those problems. In addition to having to deal with their own personal difficulties, they are striving every day to help others attain happiness, despite facing ridicule and scorn. …

“The Soka Gakkai aims at spreading Nichiren Buddhism and eliminating misery and misfortune from the world.” …

When he finished, the room rang with applause, and most of the guests who had been invited by members wanted to join, including the businessman, who had been won over by Shin’ichi’s words. …

The businessman said with irrepressible enthusiasm: “He is a very impressive young man. Each word struck into the depths of my heart with the power to topple me over. I felt like I had to put my arms behind me to support myself to keep from being blown away. This must be a great philosophy!” (NHR-25, 117–18)

The measure of a senior’s achievement can be seen in their juniors. When seniors complain about the immaturity or incompetence of their juniors, they are really only demonstrating their own lack of ability and responsibility. (NHR-25, 137)