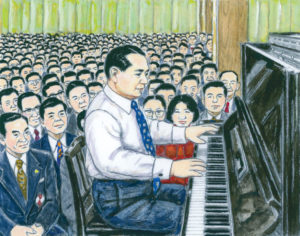 On March 11, 1977, Shin’ichi Yamamoto visited the new Fukushima Culture Center. He spoke with the Tohoku Region leader and Fukushima Prefecture leader about how best to develop young people.

In the evening, he participated in a meeting to commemorate the opening of the new culture center. He reconfirmed three guidelines he had presented eight years earlier, including “Fukushima, advance blazing with hope.” He also played the piano with the sincere wish that the spring of happiness would come to Fukushima Prefecture and the Tohoku region.

During an informal meeting with about 20 prefecture and zone leaders, Shin’ichi spoke about the importance of leaders’ attitudes and unity. He also urged the youth present to develop complete conviction in faith.

The next day, at an informal dinner meeting, Shin’ichi encouraged two women who had previously been members of Bunkyo Chapter.

In July 1957, Shin’ichi, who was acting Bunkyo Chapter leader at the time, was unjustly arrested for election-law violations during the by-election for the House of Councilors in Osaka. To show their solidarity with Shin’ichi, the members in Fukushima belonging to Bunkyo Chapter strove to be victorious in welcoming to each group 10 new households, a campaign they called “10 per Group.” The members achieved a result that became a model for the country.

On March 13, 1977, at the Fukushima Prefecture youth division meeting, commemorating March 16, Kosen-rufu Day, Shin’ichi expressed his hopes for them, saying: “Your inspiring examples will be a powerful driving force for kosen-rufu. If our youth division members gathered here today become the spark of courage for others and the light of happiness illuminating the future, Fukushima will be unshakable” (The New Human Revolution, vol. 25, p. 85). 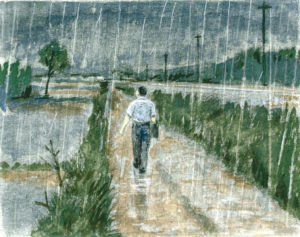 A Fighting Spirit for Kosen-rufu Ignited in the Rain

In July 1957, Shin’ichi Yamamoto, then youth division chief of staff and acting Bunkyo Chapter leader, was arrested on false charges in what later came to be known as the Osaka Incident. The members of Bunkyo Chapter living in Hamadori, Fukushima, determined to make all-out efforts to win a great victory in the propagation campaign to introduce 10 new households per group, which Shin’ichi had initiated.

One of the members in the Hamadori area was a man who had lost his job a month earlier when the company he worked for went bankrupt. His two children were both in poor health, and his life was hard.

At that time, he traveled more than twelve miles to a friend’s house to introduce Nichiren Buddhism to him. He was so involved in talking about Buddhism that he missed the last train back. With no other alternative, he started to walk home, following the train tracks.

The final words his friend said to him in their conversation about Buddhism had really hit home: “Before you come to someone else’s house to talk about Buddhism, you should find a job. And if this Buddhist faith and practice are really so wonderful, why are your children always sick?” …

Throughout the discussion, his friend was smiling skeptically and spoke with sarcasm.

While walking home that night, the man felt incredibly bitter and couldn’t hold back his tears. As his tears fell, he felt drops of water striking his face. It was raining. Unfortunately, he didn’t have an umbrella. The rain grew heavier. …

After walking for two hours, he suddenly remembered encouragement shared by Shin’ichi at a Bunkyo Chapter meeting: “There are times when you will be attacked or experience slander and abuse when you try to share this Buddhism with others. You may have many kinds of bitter experiences. But that’s all exactly as the Lotus Sutra and the Daishonin’s writings predict. Just grit your teeth, resolve not to be defeated and keep trying. It’s an opportunity to expiate past offenses. That and transforming your karma are the points of Buddhist practice. Once you’re certain of that, all your sufferings will be transformed into great joy.”

As the man recalled Shin’ichi’s guidance, he thought: “I wonder what Chief of Staff Yamamoto is doing right now? He’s been held in custody for several days now. He’s probably being harshly questioned every day. He’s not allowed out, and he can’t freely contact his family. Yet in spite of that, he’s speaking out for the truth of the Soka Gakkai and waging an all-out struggle in prison.

“Compared to him, how fortunate my situation is! If I’m weak and allow myself to be defeated, I’ll be letting down Chief of Staff Yamamoto.

The rain started to pour down even harder.

Nonetheless, the man began to walk with broad, vigorous strides as he sang Soka Gakkai songs to keep his spirits up in the rain. His determination to achieve kosen-rufu burned brightly, strongly and fiercely. (NHR-25, 59–61)

Those who think solely of their own happiness will become anxious and weak, while those who resolve to live for kosen-rufu and cultivate deep-rooted faith will develop a spirit that is broad and resilient. (NHR-25, 72)

The direction of our lives is influenced by our good fortune. Appreciation is important for accumulating good fortune. (NHR-25, 79)