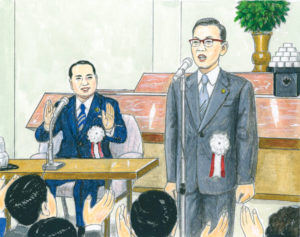 On May 22, 1977, at an unveiling ceremony for a monument engraved with a poem, Shin’ichi Yamamoto said, “Kyushu’s mission to be trailblazers means that members here must continue to be trailblazers into the distant future” (The New Human Revolution, vol. 25, p. 184).

He also conversed with the Fukuoka Prefecture young men’s leader who had been the emcee at the headquarters leaders meeting a few days prior. Shin’ichi explained the role of emcee at meetings, as well as how to offer mic support to the person leading gongyo.

He also encouraged a group of youth who were dentists.

The next day, May 23, Shin’ichi attended a commemorative gongyo meeting celebrating the 17th anniversary of the establishment of two chapters in Kitakyushu.

On May 24, he attended a memorial service for the deceased Fukuoka Prefecture members who had made great contributions to kosen-rufu. Afterward, he did gongyo with and encouraged the members at the Tabe Community Center in Kokuraminami Ward.

Visiting Saga Prefecture for the first time in a decade on May 25, Shin’ichi invited current students and graduates of Soka University living there to an informal discussion at the Saga Community Center. Seeing them, he called out to them in his heart, “All of you are eternal pioneers!” (NHR-25, 242).

On May 26, a commemorative gongyo meeting took place at the Saga Culture Center. To make it a bright and festive occasion, Shin’ichi proposed that the prefecture leader sing a song for the members. At an informal meeting later that day, he gave his all to inspire the divisional leaders there.

After the discussions were over, keeping a promise he had made to a women’s division member, he visited her husband who operated a barbershop. After that visit, the husband, having witnessed Shin’ichi’s sincerity and demeanor, began striving vigorously in faith.

Wherever he went, dramas of revival and joy spread to those he encountered. 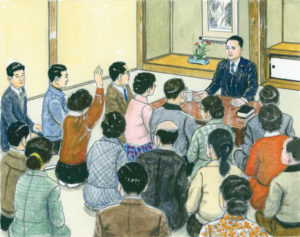 Encouragement Based on Empathy Moves Others’ Hearts

Hideyoshi Sakata was one of the individuals who had been inspired by Shin’ichi Yamamoto during the 1956 Yamaguchi Campaign. Two decades later, when he heard that Shin’ichi would be in Tokuyama, which was about 25 miles away, Hideyoshi rushed there after work.

When Hideyoshi arrived at the inn, a discussion meeting was underway. …

A woman who had a visual impairment raised her hand to ask a question.

She had lost her sight as a child, but about a month after she joined the Soka Gakkai and started practicing Buddhism, a small measure of her sight returned. Now, however, it had faded again, and she was back to where she’d started. She asked if her sight would ever be restored. …

Shin’ichi approached the woman and looked intently at her face. Then, he spoke with great compassion, as if her sufferings were his own sufferings.

“I can only imagine how hard it is for you,” he said. “It must be difficult to bear.”

He took her hand and led her to the front of the room, before the Gohonzon.

Shin’ichi’s voice reverberated through the room. It was powerful and vibrant, as if he had summoned up his entire life force. It was clear and resonant. The woman chanted with him.

Then Shin’ichi said earnestly: “Put your complete faith in the Gohonzon and pray with all your being. To realize your prayers and transform your karma, it’s vital to have firm conviction in faith. …

You are a Bodhisattva of the Earth, born with the mission of becoming absolutely happy and helping others do the same. You are a Buddha. You have voluntarily taken on all of these sufferings so that you could overcome them and demonstrate the true greatness of Nichiren Buddhism. …

“Whatever happens, never accept defeat! You must win. Win by becoming happy.”

Everyone there felt Shin’ichi’s spirit brimming with compassion.

The woman began to shed tears of joy, and her formerly sad face brightened and became luminous.

Hideyoshi felt as if he had witnessed the essence of encouragement and guidance, thinking: “Guidance is compassion. It is sharing the suffering of others. It is conviction. That life force moves others and awakens courage from within.” (NHR-25, 246–48)

Kosen-rufu begins with [the] effort to awaken and foster people through encouraging one individual after another. (NHR-25, 264)