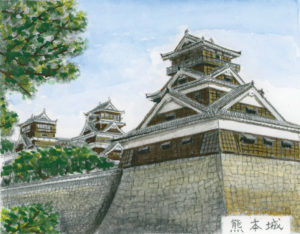 On May 27, Shin’ichi departed for the Kumamoto Culture Center. At the unveiling of a stone monument, which featured a description of the origins of the culture center, he encouraged the youth.

In a discussion with leaders, he said, “The single most important quality of capable individuals is that they have unsparingly dedicated their lives to the path of mentor and disciple for kosen-rufu” (The New Human Revolution, vol. 25, p. 281). To do this, he emphasized, leaders need to make kosen-rufu their true goal in life and, burning with that spirit, inspire fellow members.

The next day, on May 28, Shin’ichi expressed his wish for the members there to make their slogan “Capable People of Kumamoto” and advance based on this.

At an informal discussion early that evening, an activity report was given by a a member from Misumi, the place where Shin’ichi took his first steps in Kumamoto Prefecture during his first visit there. A pair of brothers from Tamana shared their experience of karmic transformation, and the members from Itsuki Village reported how they had endured struggles after heavy rain had struck the area in 1963.

Thinking of the melancholic “Itsuki Lullaby”—a song young girls sang when they left home to work as nursemaids— Shin’ichi said: “Mr. Makiguchi wanted more than anything to help children in deprived circumstances—such as the nursemaids who sang the well-known Itsuki lullabies—find happiness. That’s the starting point of Soka education and Mr. Makiguchi’s wish for the Soka Gakkai too” (NHR-25, 340).

He also encouraged a medical student whose father did not practice Nichiren Buddhism.

He also spoke about the importance of fostering and uniting people of many different personalities and talents to build an invincible bastion of Soka.

On May 29, Shin’ichi did gongyo with the Kumamoto members and played the piano for them, encouraging them up to the last moment before his departure. 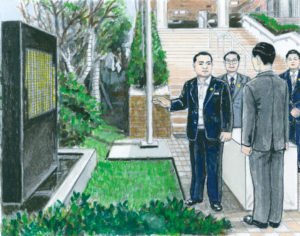 Youth, Study for the Sake of the Future!

The stone monuments were engraved with the words of the Soka Gakkai presidents … [one] featured a description of the origins of the Kumamoto Culture Center. During the ceremony, the monuments were unveiled in succession.

Prefecture Youth Leader Heihachiro Katsuyama was taken by surprise, but he managed to say, “All right,” and he stepped up to the monument. …

Heihachiro’s voice echoed loudly as he read: “Founding of the Kumamoto Culture Center. The volcanic smoke rising from the grand peak of our beloved Mount Aso. … ”

Shin’ichi said to Heihachiro: … “Because the Kumamoto Culture Center is the main Soka Gakkai facility in the prefecture, as the prefecture youth division leader, you should have read the passage beforehand and committed it to memory. While you might have felt flustered at being asked suddenly to read it aloud in public, it remains that you should have made that preparation and effort.

“Whenever we saw each other, he’d ask what I was reading. And I didn’t dare just name some title off the top of my head, because he would ask me about the book’s content and make me give him a summary. There was no way you could fool him.

“But thanks to Mr. Toda’s strict yet compassionate training, I became the person I am today.

“For the sake of the future, it is my great hope that young people will make earnest efforts to continue learning throughout life, no matter how busy they are.”

All youth division members are the successors of the Soka Gakkai and leaders who will shoulder the future of society. … Therefore, Shin’ichi offered this stern guidance out of his desire to foster this leader into a first-rate person of culture and learning. (NHR-25, 276–78)

Surpassing one’s mentor in one’s struggles is the mark of a true disciple. The key to the eternal perpetuation of the Law is to advance kosen-rufu even further than one’s mentor did during their leadership. (NHR-25, 296)

Excerpts From Nichiren’s Writings in Volume 25