This installment, published in the November 17, 2020, issue of the Seikyo Shimbun, focuses on passages from Nichiren Daishonin’s writings that Ikeda Sensei discusses in volume 25 of The New Human Revolution.

“Teaching another something is the same as oiling the wheels of a cart so that they turn even though it is heavy, or as floating a boat on water so that it moves ahead easily.” (“The Wealthy Man Sudatta,” The Writings of Nichiren Daishonin, vol. 1, p. 1086)

Fostering Youth Through Our Own Examples 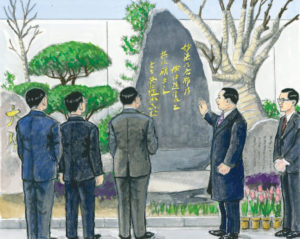 On March 11, 1977, Shin’ichi Yamamoto visited Fukushima Prefecture and spoke to the prefectural leaders in detail about the fundamentals of fostering young people for the sake of the future.

“It’s very important, not only in propagation efforts but in all activities, to make the purpose very clear and reconfirm it with all involved. This enables all members to bring forth their full potential and advance without straying from the path.

“It’s important to remember, however, that we cannot simply tell young people who have no previous experience in sharing Nichiren’s teachings about the significance of propagation, encourage them to do their best and expect them to succeed. Most people would still feel unable to do it.

“We need to show them through our own example how to introduce Buddhism to others.

“One effective way is for seniors in faith—men’s and women’s division members who have succeeded in explaining Nichiren Buddhism to others—to share their actual experiences.

“It’s also necessary to occasionally go together with young people when we engage in dialogue about Buddhism, teaching them in the midst of actual Buddhist practice an example of what to do. By giving them the chance to observe us in action, they’ll think, ‘I see. That’s how one does it. I can do that. I want to try!’

“When people think something is beyond their capacity, they will hesitate to act. But if they think they can do something, they’ll take action.” …

Encouragement and guidance serve to identify the thing holding us back, remove the obstacle and rouse our courage. (The New Human Revolution, vol. 25, pp. 13–14)

“To accept is easy; to continue is difficult. But Buddhahood lies in continuing faith.” (“The Difficulty of Sustaining Faith,” WND-1, 471) 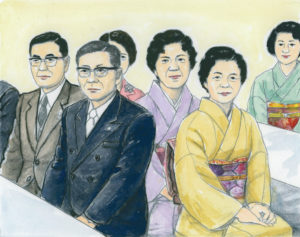 When visiting Yamaguchi Prefecture on May 19, 1977, Shin’ichi Yamamoto held an informal discussion with the members he had fought together with during the pioneering days of the 1956 Yamaguchi Campaign. He encouraged them to remain steadfast in faith until the end of their lives.

“Those who were in their forties and fifties at that time [during the Yamaguchi Campaign] are now in their sixties and seventies, the period for putting the finishing touches on their lives, so I’d like to talk a little bit about what that means. …

“The first thing is to have a spirit of gratitude and a dedication to kosen-rufu for as long as you live, all the while continuing to strengthen your faith. Though your leadership position may have changed, you should never think of yourself as having retired or graduated from faith. You are still fighting the good fight, just in a different role.

“Otherwise, everything you’ve pledged, determined and said to others so far will be for naught. If they see you’ve given up, your juniors will lose heart and become dejected, and that may cause them to lose faith in Buddhism. …

“All Soka Gakkai members are closely observing the way their seniors in faith, who’ve practiced Nichiren Buddhism for many years, lead their lives. That’s why former Soka Gakkai leaders have the mission and responsibility to be role models as long as they live, demonstrating the correctness of the Soka Gakkai and Buddhism.

“Of course, with age you may lose some of your physical vigor, and it may be harder for some of you to get around, but that’s the natural progression of life. There’s no need to overexert yourself or feel self-conscious. Just be yourself and keep encouraging members, talking about Buddhism, and striving your best for the sake of kosen-rufu. (NHR-25, 128–29)

Creating the Culture of Peace