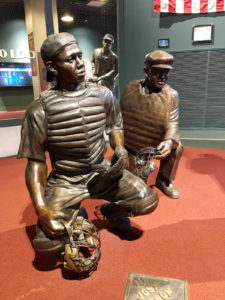 Sculptures and a historic photo from the Negro Leagues Baseball Museum in Kansas City, Mo., honoring African American baseball players and their impact on the social advancement of America.

On Dec. 16, in a monumental change for the sport, Major League Baseball (MLB) announced it was elevating the 1920–48 Negro Leagues to major league status. The “long overdue recognition,” as MLB called it in a news release, will add the names of some 3,400 Negro Leaguers from seven distinct leagues in the 1920s, ’30s and ’40s, along with all their accumulated statistics, to its official records.

“All of us who love baseball have long known that the Negro Leagues produced many of our game’s best players, innovations and triumphs against a backdrop of injustice,” MLB commissioner Rob Manfred said in a statement. “We are now grateful to count the players of the Negro Leagues where they belong: as Major Leaguers within the official historical record.”

—Adapted from an article in the Dec. 16 issue of The Washington Post

Get Your Study On!

Save on Online Purchases