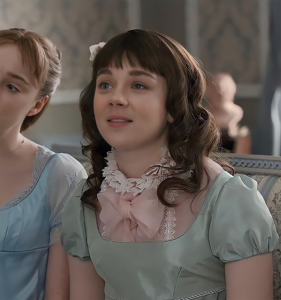 Some say Miss Eloise is the secret weapon to Netflix’s most popular show, Bridgerton. She draws the attention of viewers as an independent and strong-minded female protagonist in the period drama set in London in 1813.

She is played by Claudia Jessie, an SGI-UK young women’s division member, who will celebrate her 14th year of Buddhist practice this month.

In a Jan. 14 interview published on producer Shonda Rhimes’ website, shondaland.com, the actor talks about her life as an SGI Buddhist and how her practice of chanting Nam-myoho-renge-kyo instilled in her resilience and hope as a suicidal teenager.

“The Buddhism I practice is no fool to think that we aren’t capable of absolutely anything and everything,” she said. Attaining Buddhahood, she emphasized, is not about removing oneself from society or becoming someone else. “But it’s you that’s going to have to take full responsibility of whether or not you commit to believing that yourself,” Ms. Jessie added.

When asked for Buddhist wisdom to help people deal with these uncertain times, she responded: “There’s something so magical about the philanthropic heart of those who want to do something for the future. And the way we do that is by treasuring the person in front of us. I’ve always been told to treasure that one person in front of you with your whole heart.”

Brim With the Great Joy of the Bodhisattvas of the Earth