World Tribune: We heard that you have had a transformative two years of Buddhist practice. Since receiving the Gohonzon in 2019, your teenage daughter overcame a life-threatening illness; Illy, your mother beat cancer; and Nikolai, your band, The Strokes, recently won a Grammy for Best Rock Album. That’s fantastic. What sparked your interest in Buddhism? 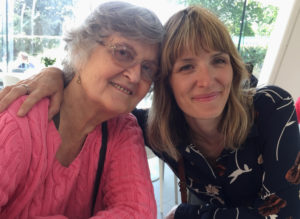 (Left to right) Illy Fraiture and her mom, Hanna Jankovich, in London, July 2018.

Illy Fraiture: I grew up in London, where my mother has been practicing Nichiren Buddhism with the SGI for over 40 years. While I loved the philosophy, I felt conflicted about being a member of an organized religion and thought I could live happily without it.

Everything changed in 2018 when my mother was diagnosed with cancer. She was initially petrified, but when I visited her, I noticed her chanting Nam-myoho-renge-kyo for hours every day, and her life state grew stronger. Even as the diagnosis got worse and more aggressive treatment was recommended, she still participated in SGI activities and encouraged members. I had never seen her so strong. Now she is cancer-free.

Nikolai Fraiture: The courage my mother-in-law exuded in the face of this monumental challenge was inspiring. Observing the unbelievable effect of her SGI practice, I decided to begin my own exploration into Buddhism.

WT: Seeing actual proof is a great motivator, isn’t it? Soon after you joined, though, you faced another serious problem. Tell us more.

Illy: We joined the SGI with our daughter, Elysia, and son, Phoenix, who were 14 and 11 at the time. Soon after, Nikolai and I became increasingly concerned about Elysia, as she was very unhappy at school. After discovering that she had a serious illness, I became consumed by fear and anxiety.

But when I read Nichiren Daishonin’s encouragement to a couple whose daughter was seriously ill, I reminded myself that our Buddhist practice was bringing everything to the surface so that we could take action and win.

Elysia had to leave school in May 2019 and be hospitalized, but our daily chanting and support from SGI friends gave us strength. To our great relief, she was discharged within three months, quickly accepted into a new school and made friends immediately.

Not only did our daughter recover and become happier and stronger, but we also started changing as a family. Every time I did gongyo, my heart welled up with appreciation for everything in my life. Our kids were fighting less and making each other laugh more. We were becoming harmonious.

Nikolai: It was a really difficult time for us, but chanting for my daughter’s recovery enabled me to deepen my compassion for her and see her struggle from her point of view. Elysia helped me realize that my family karma was still lurking beneath the surface of a seemingly happy life.

Mental health issues have run in my family for generations. I faced depression myself and spent most of my youth angry and confused while trying to seem OK. I coasted like this for many years, got married, had children and a career. Yet I silently suffered. 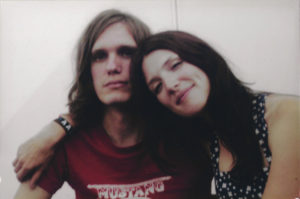 Illy and Nikolai at a music
festival in Barcelona, Spain, July 2006. Photo courtesy of Illy Fraiture.

I’ve always been aware that I wanted to change and spent years trying. Through chanting, however, I feel like I’m accessing something on a much deeper level. I’ve become more relaxed and less judgmental toward others and myself. Reflecting on family history, I think it’s easy to assume you’re stuck and can never become fully happy. But now, I focus my energies on connecting with the Mystic Law and advancing kosen-rufu. I no longer ask myself, Why me? Instead, I think about how I can encourage others.

Illy: After overcoming these challenges together with my SGI family, I will never be able to look at hardships the same way again. I can see that every small challenge I overcome helps me deepen my faith. While the obstacles have not stopped coming, my attitude is different. I am facing every problem with a fighting spirit and the conviction to create value from each situation. I no longer feel powerless. Taking on leadership in the SGI has also empowered me to confidently express myself.

WT: Speaking of having a fighting spirit, Nikolai, after more than 20 years as a band, The Strokes recently won its first Grammy for the album “The New Abnormal.” Congratulations! How has your Buddhist practice helped?

Nikolai: Thank you. The benefit of chanting mornings and evenings with Illy has created a deep harmony that extends beyond our physical voices—to our family, home and environment. My relationships at work improved tremendously. When I revealed I had become an SGI Buddhist, one of my colleagues excitedly shouted to another: “I knew it! I told you there was something different about him.”

In the past, I had very strong opinions I would stand by, but the way I was expressing them was misguided. That was a major aspect of how I changed. Sincere compassion based on Ikeda Sensei’s encouragement and Nichiren’s teachings led me to engage in much more respectful dialogue and be more fully present during interactions with my bandmates. I believe this change in me contributed to us collaborating more harmoniously.

I also began to realize how much appreciation I had for my bandmates, who are some of my best friends I grew up with. I had lost sight of those first magical moments of the band. Chanting rekindled that excitement. This appreciation for one another grew and made our work the most enjoyable in 20 years.

WT: We’re very happy for you and your bandmates. Any parting thoughts?

Nikolai: The global pandemic has hit everyone in different ways, and our SGI practice has been an essential part of my family’s ability to cope. When I first started chanting, I wrote down a quote by Sensei, which seems to apply even more today: “None of us can exist in isolation. Our lives and existence are supported by others in seen and unseen ways, be it by parents, mentors or society at large. To be aware of these connections, to feel appreciation for them and to strive to give something back to society in a spirit of gratitude is the proper way for human beings to live” (The Victorious Teen, p. 71).

Illy: The past two years have been like a renaissance for our family, and we have Sensei and the SGI community to thank for that. We want to express this appreciation through the upcoming May Commemorative Contribution activity and share our Buddhist practice with as many people as possible so that they can learn how to transform their karma and environment, too. We believe that supporting the SGI organization and fellow members by contributing our time and money is the surest way we will achieve peace in the land and justice and equality for all.

Nikolai: I feel like now we have the tools to build a life of absolute happiness, so I’m genuinely excited about the future. By name, SGI is a practice of value creation. [The Japanese word soka means value creation.] Thus, every day becomes an opportunity for us to hone our courage, compassion and wisdom

The Joy of Contributing to World Peace