Living Buddhism met with SGI-USA pioneer member Sumiko George, who celebrates her 63rd year of Buddhist practice this year. We asked her about her early years, her faith and her beautiful life with her husband, Robert George.

Living Buddhism: Hello, Sumiko. Thank you very much for meeting with us, and thank you for your generous financial support of the SGI-USA throughout the years. How were you introduced to Buddhism?

Sumiko George: First, let me say it is my honor to dedicate anything I have to kosen-rufu. I began my Buddhist practice in my 20s, but it was a long time coming. From childhood, I suffered from a weak immune system, so I was sick nonstop. I had constant stomach pain, but I never knew why. Going to the doctor back then was a luxury, so we didn’t even consider it.

I had six siblings, and my parents could barely feed us. Things only got worse, when I was 9 years old, and my mother was admitted to a mental health facility. My siblings and I were scattered to the homes of other families, where we cared for their children. I worked each day in intense physical pain and couldn’t complete basic schooling. Unfortunately, my mother passed away a few years later while institutionalized. The day she was taken from us was the last time I saw her.

This must have been so difficult for you. We understand that you learned about the Soka Gakkai in a unique way during this time.

Sumiko: Yes. After returning home as a teenager, my father showed me an article about the Soka Gakkai and why second Soka Gakkai President Josei Toda was imprisoned unjustly. This was before the Soka Gakkai had a newspaper. “You’d be a fool to join this religion,” my father told me. But when I read the article, I felt drawn to the Soka Gakkai’s philosophy. I was in constant pain and often asked myself, Why am I suffering so much even though I did nothing wrong? I thought I would find answers in the Soka Gakkai, but I didn’t know any members, so I had no idea how to learn more. But that article planted a seed in me that later bloomed.

That’s fascinating. I wonder how your father received the article?

Sumiko: I never found out. My father was a graduate of Meiji University in Tokyo. At the time, it was rare, especially for poor people, to attend university. It is possible that one of his old classmates was an educator who had joined the Soka Gakkai and sent it to him. That is just my guess, though.

Buddhism teaches that when we chant Nam-myoho-renge-kyo and spread this teaching, protective forces come to our aid in the crucial moment.

How did you eventually start your Buddhist practice? 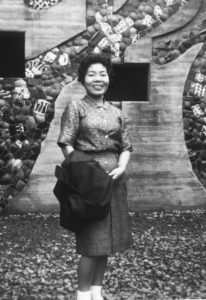 Sumiko: By my 20s, my illness had only worsened. At the time, millions of Japanese were dying from treatable illnesses like appendicitis and tuberculosis because of a lack of resources in a war-torn nation. I was hospitalized several times and learned that my illness was due to an inflamed large intestine, which had caused a lot of internal damage. In fact, my older sister had died from the same illness.

I was 28 when I finally met a Soka Gakkai member, and I immediately received the Gohonzon in June 1958. My father and family members made fun of me, suggesting I was being silly and superstitious, but my life transformed quickly.

What changes did you see in the beginning? 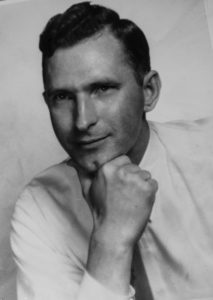 Sumiko: I had been working as a housekeeper at the U.S. Air Force base in Itazuke since I was 19. One day in November 1958, I was walking on base with my roommate. I was cringing in pain about to collapse when a man caught me before I hit the ground. He brought me to the hospital, where I was told that I would need intestinal surgery, but I had no money. Without hesitating, this man whom I had just met, offered to pay for my surgery.

Buddhism teaches that when we chant Nam-myoho-renge-kyo and spread this teaching, protective forces come to our aid in the crucial moment. This man, Robert George, became my protective deity, because that surgery saved my life. He also later became my husband.

What an incredible story. How did your romance blossom?

Sumiko: Robert became the love of my life. After we met, he was transferred to another base in Tokyo, and we lived together there until he had to return to the U.S. in 1961. We continued a long-distance relationship for several years. Robert even worked extra jobs to save money to visit me in Japan. In 1964, he was finally able to return to Japan, and we got married. 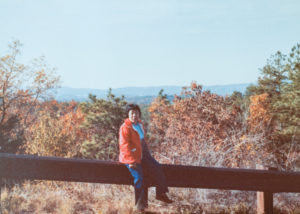 That May, I moved to the U.S. with Robert. We lived in Montana before permanently settling in Alabama in 1966.

Since coming to America, I have done my best to advance kosen-rufu. During my two years in Montana, I was a unit leader, supporting members who lived very far away. Back then, I often attended meetings more than 12 hours away in Seattle. I was so happy to pioneer the kosen-rufu movement in America.

You mentioned joining the Soka Gakkai because of your many health problems. How is your health now?

Sumiko: Since my surgery in 1958, I have changed my family karma, and I’m in great health! I am 91 now, and the only medication I have taken in the past 63 years is baby aspirin. Today, I wake up quite early to chant several hours in the morning for kosen-rufu to advance in America.

Your efforts to pioneer kosen-rufu seem to have given you so much vitality! How did your Buddhist practice impact your life with your husband?

Sumiko: Although Robert was not an SGI member, he fully supported me by welcoming SGI members to our home, taking me to meetings and offering financial contributions with me. I think he saw the benefits of the practice as well. He had a very successful military career and retired early. Through my Buddhist practice, I developed confidence that I deserved a wonderful life. I now understand that I went through all of those health and financial challenges as a young woman to prove the power of the Gohonzon and inspire others to become happy, too!

We understand that your husband came to appreciate the SGI community even more after battling illness.

Sumiko: Yes, my husband had always appreciated SGI members, and he was especially overwhelmed by their care for him in 2012 just before he passed away.

He was so inspired because SGI members were his main visitors, and even though he wasn’t a member, they cared for him like family. Just before he passed away, he asked that I donate a significant amount to the SGI-USA out of his appreciation. He wanted SGI’s network of hope and care to grow so more people could experience what he did. Since his passing, I have contributed as much as possible to the SGI-USA on behalf of my husband. In doing this, I feel that I am living for the both of us.

How would you sum up your life with him? 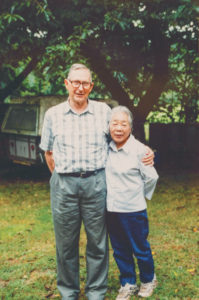 Sumiko: I cannot put into words how much I love Robert. I met him right after receiving the Gohonzon. He paid for my life-saving surgery. He loved me and brought me to America where I could fight for worldwide kosen-rufu together with Ikeda Sensei.

I want to live long so that I can continue to advance kosen-rufu on behalf of Robert. Whenever I participate in the May Commemorative Contribution activity, I feel closer to him and that I am making more causes to lead him to Buddhahood. Striving for worldwide kosen-rufu together with Sensei, the SGI and Robert has given me the greatest pride and happiness. Robert and I had such a happy life together. I feel like we lived a romance novel. I will continue expressing my appreciation for Sensei and the SGI through my actions toward 2030!

I want to live long so that I can continue to advance kosen-rufu on behalf of Robert.

‘A Renaissance for Our Family’

The Meaning of My Struggles