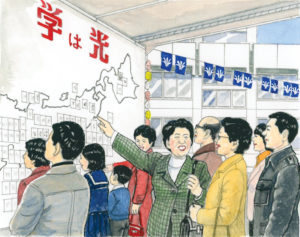 Establishing a division of correspondence education had been his dream from the time he had resolved to found Soka University. It was a major goal for him, believing as he did in education for all. Prior to its opening, the faculty and staff of this new division held numerous discussions and decided to have counselors in each prefecture to offer support and advice to the correspondence students.

Moreover, Shin’ichi named its publication Gakko (Light of Learning). This name became the division’s guiding principle: “The light of learning—illumining one’s life as an individual and society as a whole” (NHR-23, 101).

During the first summer inclass session, held from August 15–29, Shin’ichi stopped by to encourage the correspondence students. He also visited the students attending the fall in-class sessions, taking commemorative photographs and engaging in conversation with them. At the Soka University Festival in November, everyone enjoyed viewing an exhibition indicating each correspondent student’s hometown.

To reply in earnest to Shin’ichi, the correspondence students diligently applied themselves to their studies. In March 1980, the first correspondence students graduated from the program. Since that time, countless graduates have been contributing to society. Some have gone on to receive doctorates in medicine, engineering and other fields, while others went on to have successful careers in various areas such as accounting, education and law. 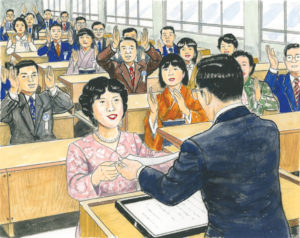 A Life of Constant Learning Shines With Victory

In March 1980, Soka University’s Division of Correspondence Education graduated its first class. Among the graduates, was a woman named Shoko Imai who had lost her hearing as a result of an accident while in junior high school. As a result, she had been unable to pursue higher education yet burned with a passionate desire to continue learning. Years later, after getting married and having three daughters, she learned about Soka University’s correspondence program and entered with a resolve to make her children proud of her.

The example we set as parents is the best education we can give to our children.

Having been accepted into the correspondence education program, she studied very hard while raising her children and managing her home. But from the time of the accident many years ago, the headaches and ringing in her ears persisted, and when she sat at her desk for more than thirty minutes, she was overcome with extreme nausea. When that happened, she would lie down and press on with her studies. …

Shoko sometimes worried that perhaps continuing with the correspondence program was beyond her abilities. Whenever those thoughts arose, she recalled the time when her school’s founder, Shin’ichi Yamamoto, had suddenly appeared in the classroom during her first summer in-class session. In spite of how busy he was, she thought to herself, President Yamamoto came to our class and, with beads of sweat on his brow, encouraged us with all his might. Because of her hearing problem, she didn’t know what Shin’ichi had said, but from the expression he wore as he spoke intensely to them she sensed his profound commitment to the students and his high expectations for them. That gave her immense encouragement.

At that in-class session, Shoko was moved to tears. It seemed to her through the tears clouding her eyes that Shin’ichi was looking directly at her. … She wanted to somehow respond to Shin’ichi’s encouragement, and she decided that the best way to do that was to graduate from the correspondence program within four years and announce her victory to President Yamamoto. …

During the in-class sessions, she paid very close attention to every word her instructors wrote on the blackboard and did her best to follow the lessons in spite of being unable to hear. Her fellow students also helped her, showing her their notes. And now finally she had successfully graduated.

When Shin’ichi heard the story of Shoko Imai’s victory, he sent her a published collection of his poems to commemorate her graduation. One of the poems contained the following lines:

It is easy to educate others,
hard to educate oneself.
Staying on the correct course in life as long as you live
and continuing to educate yourself is
the path of human revolution.
(NHR-23, 150–52)

Life itself is a learning process, and learning as long as we live is the way to lead a fully human life. (NHR-23, 86)