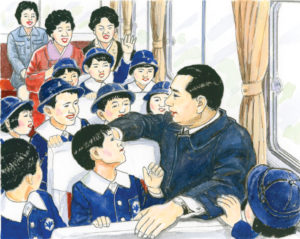 The Sapporo Soka Kindergarten in Sapporo, Hokkaido (the northernmost of Japan’s four main islands), opened its doors on April 16, 1976. As its founder, Shin’ichi Yamamoto participated in the entrance ceremony, greeting each pupil as they arrived. The day before the ceremony he had a chance to engage in a discussion with the faculty and staff, and encouraged them, saying, “Please work together in harmony and unity to build an unsurpassed citadel of humanistic education” (The New Human Revolution, vol. 23, p. 8).

At the entrance ceremony, with the intention to look after the students throughout his life, Shin’ichi sat in the last row of seats behind them. Commemorative photograph sessions and tree-plantings followed to mark the occasion. At the end of the day, Shin’ichi rode on the school bus that transported the students to their homes, confirming the duration and safety of the commute. The next day, he visited classrooms and enjoyed getting to know the pupils even more.

Amid his busy schedule, Shin’ichi found time to visit the kindergarten. He thought about the students as he composed messages for their entrance and graduation ceremonies. The school’s teachers also worked hard to actualize the motto “Be strong, righteous and cheerful” (see NHR-23, 26). Nurtured by the passion of Shin’ichi, the instructors and the staff, these students grew freely, taking flight into their futures.

Following the Sapporo school, Soka Kindergartens opened in Hong Kong, Singapore, Malaysia, Brazil and Korea. The humanistic pedagogy of Soka education came to be highly regarded in every region and country where these kindergartens opened their doors. 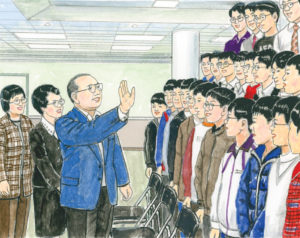 The Hong Kong Soka Kindergarten opened in 1992. Every morning since its opening, Principal Wong Sui Yok stood at the school’s entrance and greeted the children with a smile, and, at the end of the day, she sent them home in the same way.

Around six years after the kindergarten began operation, however, she [Principal Wong Sui Yok] was no longer present. She had been diagnosed with cancer.

Principal Wong had deeply engraved in her heart words that expressed her innermost spirit, “The Hong Kong Soka Kindergarten is my life.” These were from one of the mottoes that Shin’ichi Yamamoto had written on Japanese manuscript paper, which hung on the faculty room’s wall.

She entered the hospital to have surgery. Though she felt bad and regretted being away from the students and the kindergarten that embodied the life of its founder, it couldn’t be avoided. In her present condition, afflicted with cancer, she felt useless and hopeless. …

[Following surgery,] her physician said, “You need to think of something that makes you happy so that you can endure the discomfort and triumph over your illness.”

Principal Wong envisioned herself completely recovered and once again greeting her students with a smile each morning as they arrived at school. That was enough to make her happy. She also imagined herself standing at the kindergarten’s entrance with its founder, Shin’ichi Yamamoto. The light of hope seemed to pour down upon her. My students and President Yamamoto are waiting for me, she thought. I will serve the children all my life as President Yamamoto’s representative. I will never be defeated! I’ll conquer my cancer and stand once again in the entrance to the kindergarten, welcoming and seeing off the students!

Having a noble purpose in life causes limitless strength to arise from within. Eventually Principal Wong did overcome her cancer and stood once again at the school entrance. Each day she offered the students the flower of her smile, with a sense that she was standing there together with Shin’ichi.

In December 2000, Shin’ichi visited Hong Kong and was reunited with representative members of the Hong Kong Soka Kindergarten’s first three graduating classes, sitting for a commemorative photograph with them. “I’m so happy to see you,” he said. “You are my pride and my treasure.”

The graduates of the first class were already in the second year of junior high school. Shin’ichi was astonished to see how much they had grown. He was deeply moved to see their futures developing. A representative of the students presented Shin’ichi with a bouquet. “Thank you,” he responded. “You’ve all gotten so big. You’re all grown up now!”

As Principal Wong watched the kindergarten’s founder talk with its graduates, tears streamed down her cheeks. They were the crystallization of her love for the students and her joy at being alive. (NHR-23, 63–65)

There are always fresh new challenges. Today is never the same as yesterday. That’s why the passion, courage and action to rise to those challenges are so important. The indefatigable effort to solve a challenge through the process of trial and error in order to find the best way to do something eventually takes shape as a most valuable experience. (NHR-23, 8)