On August 26 this year, after an interval of almost six months, the 46th Soka Gakkai Headquarters Leaders Meeting of the New Era of Worldwide Kosen-rufu was held at the Hall of the Great Vow for Kosen-rufu in Tokyo. In a message for the occasion, Ikeda Sensei recalls how second Soka Gakkai President Josei Toda and his mentor, founding Soka Gakkai President Tsunesaburo Makiguchi, were imprisoned together by Japan’s militarist wartime government because of their refusal to compromise their religious beliefs, and how this led to Mr. Toda’s awakening to his identity as a Bodhisattva of the Earth during his incarceration.

Sensei declares: “The Soka Gakkai is none other than the gathering of the Bodhisattvas of the Earth called forth through the solemn resolve of this mentor and disciple.”[1]

In the same message, he also reaffirms that the decade from the Soka Gakkai’s 90th anniversary to its centennial in 2030 will be crucial and that we must be even more determined to “effect a powerful change in the destiny of all humankind.”[2] He then emphasizes that the World Youth General Meeting on September 27 will mark “the hope-filled start of that far-reaching journey of mentor and disciple.”[3]

This headquarters leaders meeting also saw the unveiling of a new song composed by Soka youth of the world titled “Eternal Journey with Sensei (The Song of Our Vow).” The lyrics, inspired by The New Human Revolution, express the disciples’ shared vow to ceaselessly carry forth the spirit of human revolution and the resolve of their mentor as encapsulated in the novel.

The tradition of singing Soka Gakkai songs has always been a part of our movement to advance kosen-rufu, and the “Courage” chapter of volume 23 of The New Human Revolution provides a detailed description of the composition of the “Song of Human Revolution” in 1976. That year marked the anniversary of the Osaka Rally[4]—the starting point of Shin’ichi Yamamoto’s struggle for justice and human rights—and he decides to compose a new song that not only captures the essence of the Soka Gakkai spirit and philosophy but also stirs courage in the hearts of the members, a song that rouses in them the “unyielding fighting spirit to overcome any adversity.”[5]

The chapter shows how Shin’ichi puts his utmost effort into finding the best way to convey through the lyrics of the song the moment of his mentor’s awakening while in prison during the war. He writes and rewrites the lyrics over and over as he seeks to express this moment of profound spiritual awakening that forms the cornerstone of the conviction of the Soka Gakkai, the organization advancing in complete accord with the Buddha’s will. This results in the following lines in the second verse:

If we are truly Bodhisattvas of the Earth,
then we have a mission to fulfill in this world.[6]

Just as the “Song of Human Revolution” became a powerful driving force for the movement for human revolution, I am confident that the youth division’s new song will also generate great momentum toward the realization of worldwide kosen-rufu and motivate our youth members as they advance.

The “Bold Struggle” chapter was serialized in the Seikyo Shimbun from June to August of 2010, the year that marked the 50th anniversary of Sensei’s inauguration as third president and the 80th anniversary of the Soka Gakkai’s founding. The first installment of the chapter appeared on the June 3 issue of the newspaper, the same date that the monthly headquarters leaders meeting was held.

The day before that meeting, Sensei shared that it was now time for the members to take full responsibility for the Soka Gakkai, that this was a crucial moment that would determine the future of the organization and that from here on out we must not wait for his instruction. Then, in his message for the meeting, which was read out to the participants, he stresses:

Now is the time for me to put the finishing touches to my work and leave everything to you. … When disciples stand up with an even deeper commitment to their mission in response to the guidance and instruction they have received from their mentor, it gives rise to a fresh, dynamic momentum for progress and victory, opening the way to a bright tomorrow.[7]

The opening words of the “Bold Struggle” chapter published in that morning’s paper read: “Society and the times are constantly changing. The Soka Gakkai entered a new era with new culture and training centers and a steady stream of new capable individuals.”[8] The chapter goes on to describe how, in August 1976, Shin’ichi informs a youth member from Osaka that he would regrettably be unable to attend the Kansai Culture Festival they were holding:

The time has come for my disciples to stand up. … Please all work vigorously together to make your culture festival an explosion of joy, even more than if I were there. If you can do that, you are true disciples. I’ll be watching over you.[9]

In the intervening years, we have seen how Sensei continued to make intense efforts to complete all 30 volumes of The New Human Revolution. Volume 24 began serialization on October 1, 2010, with the “Ode to Mothers” chapter, and eventually the concluding installment of the final volume was published on September 8, 2018.

In the Afterword to The New Human Revolution, he writes:

It is my sincere hope that Soka Gakkai members will make the completion of The New Human Revolution a fresh starting point and stand up as “Shin’ichi Yamamotos” to work for the happiness of others. I pray that, through their tireless, tenacious efforts, they will create their own brilliant history of human revolution.[10]

It can be said that these 10 years since “Bold Struggle” was written have been a period in which we have striven to reveal our potential as disciples who can encourage others with the same heart as our mentor instead of simply waiting for his encouragement.

We are now facing an age fraught with great societal change. Precisely amid such turbulent times, let us challenge ourselves to forge ahead as “Shin’ichi Yamamotos” and carry out our personal human revolution each and every day.

The Start of Soka Education

While November 18, 1930, the publication date of Mr. Makiguchi’s Soka kyoikugaku taikei (The System of Value-Creating Education), is celebrated as the founding of the Soka Gakkai, “The Future” chapter makes a point of highlighting that it also marks the initiation of Soka Education. The year 1976 saw dynamic development in the realm of Soka Education: with the establishment of the Sapporo Soka Kindergarten and the Division of Correspondence Education at Soka University, its reach had now expanded to early childhood education and distance learning.

In the “Light of Learning” chapter, we read about the strong desire of both presidents Makiguchi and Toda to offer distance learning opportunities. Both had inaugurated correspondence education programs, and yet, for Mr. Makiguchi, due to the recession after the Russo-Japanese War, and for Mr. Toda, the period of steep inflation following World War II, they were forced to close down these businesses. The formation of the Division of Correspondence Education was thus an effort on Shin’ichi’s part to make their dreams a reality—both Mr. Makiguchi’s vision for an education that serves the happiness of individuals and Mr. Toda’s wish for education to be accessible to all.

Having attended night courses in political science and economics at Taisei Gakuin (presentday Tokyo Fuji University) in his youth, Shin’ichi knows full well the struggles that come with distance learning. In the hope that students in this new division would go on to illuminate their lives and society through their pursuit of learning, he offers them the guiding principle to be “the light of learning.” In addition, addressing the night course students as his precious successors, he declares:

With the pride that they are following in my footsteps, that they are walking the true path of mentor and disciple, the night school students should strive their hardest and polish and perfect themselves.[11]

This year, due to the COVID-19 pandemic, Soka University’s Division of Correspondence Education conducted all their summer sessions online for the first time.

These classes were attended by students across Japan and in 18 countries and territories around the world, marking a new page in the history of the division.

As we mark the 90th anniversary of the publication of The System of Value-Creating Education, the great light of Soka Education is now radiating powerfully throughout the world.

Translated from the September 23, 2020, issue of the Seikyo Shimbun, the Soka Gakkai’s daily newspaper. 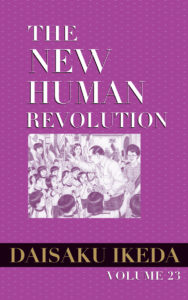 The Future
The Sapporo Soka Kindergarten opens on April 16, 1976, in Hokkaido, a place where presidents Makiguchi and Toda both had connections.

Light of Learning
The Division of Correspondence Education is established at Soka University. Shin’ichi Yamamoto meets and encourages the students.

Courage
The Hisho-kai (a group for night school students) makes dynamic strides. The “Song of Human Revolution” is performed for the first time.