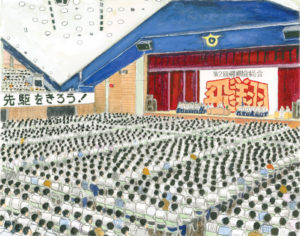 On the night of May 16, 1976, a Working Students Forum was held for the Soka Gakkai young men’s student division night school section. In August 1975, Shin’ichi Yamamoto had named this group of students the Soaring Group. These youth burned with the pride that they were following in the footsteps of their mentor, who had also attended night school.

In hearing a report about the meeting in May, Shin’ichi commented that as the Soka Gakkai faces crucial challenges in the course of advancing kosen-rufu, the members of the Soaring Group “will valiantly take the lead … and they will boldly open a way forward toward great victories” (The New Human Revolution, vol. 23, p. 196).

At their general meeting on August 29, 1976, it was proposed that Soaring Groups would be established throughout the country. Shin’ichi continued encouraging members of this group in various ways.

July 17, 1976, marked the anniversary of Shin’ichi’s release from custody after spending two weeks in jail due to groundless charges by the Osaka Prefectural Police. He vowed with fellow members to achieve victory for Soka justice. To commemorate this day, he composed the “Song of Human Revolution,” expressing the vow of Soka Gakkai members to achieve kosen-rufu.

A draft of the lyrics was shared at the July 18 headquarters leaders meeting. Afterward, Shin’ichi further polished them and worked with a few others on the melody. That night, the “Song of Human Revolution,” a song exuding the shared struggle of mentor and disciple, was completed. From the very next day, members across Japan began singing this song and was later sung by members throughout the world. 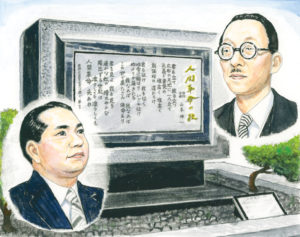 A Song Honoring the Shared Struggle of Bodhisattvas of the Earth

In July 1976, Shin’ichi Yamamoto completed the “Song of Human Revolution.” It was a song of life created to uplift the spirits of his comrades.

In composing the “Song of Human Revolution,” Shin’ichi took the greatest pains trying to find a way to express and communicate Josei Toda’s profound spiritual awakening in prison to his identity as a Bodhisattva of the Earth. It was based upon this awakening that Mr. Toda, alone, dedicated his life to kosen-rufu.

As Nichiren Daishonin writes, “If you are of the same mind as Nichiren, you must be a Bodhisattva of the Earth” (“The True Aspect of All Phenomena,” The Writings of Nichiren Daishonin, vol. 1, p. 385). This awakening is the starting point of the conviction of the Soka Gakkai, the organization in complete accord with the will and decree of the Buddha, directly linked to the Daishonin and dedicated to kosen-rufu. The awareness of the mission of the Bodhisattvas of the Earth is knowing the true and fundamental purpose of life—being born with the mission to strive for the happiness of others—and putting it into practice. It is the source for creating the absolute maximum value in life. It is the activating force for establishing a greater self that embraces all peoples and indeed all humanity through transforming the petty life state of the lesser self, concerned only with its own interests and cares, into the wish to help others. In other words, dedicating oneself to the mission of the Bodhisattvas of the Earth is the path of human revolution.

Because of the mood of helplessness and depression and the failure to apprehend the true meaning of life that prevailed among young people at the time, Shin’ichi wished to make a vigorous appeal to youth about the purpose of living. He expressed that in the lines of the second verse of the song: “If we are truly Bodhisattvas of the Earth, / then we have a mission to fulfill in this world.”

At the end of 1976, to commemorate Shin’ichi’s upcoming forty-ninth birthday on January 2 of the coming year, a stone monument inscribed with the “Song of Human Revolution” was built and unveiled on the grounds of the Soka Gakkai Headquarters. The monument was contributed by members who, as Shin’ichi’s disciples, all wished to show their determination to fulfill their mission as Bodhisattvas of the Earth. The “Song of Human Revolution” was a joint creation of mentor and disciple. It is a hymn to life. Following the lyrics engraved on the monument, Shin’ichi added, “Dedicated to my mentor, Josei Toda, by his disciple, Shin’ichi Yamamoto.” (NHR-23, 243–44)

What are the essential qualifications needed to be a capable individual in the twenty-first century? A highly polished mind, and courage and humanity fostered through adversity. (NHR-23, 174)

Those who make the greatest effort achieve the most growth. Those who are bearing the most adverse karma also have the noblest mission. (NHR-23, 180–81)